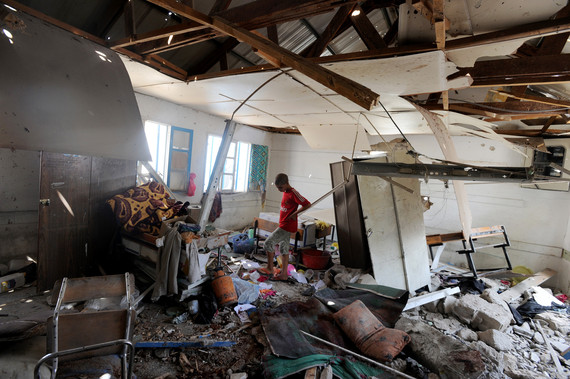 A Palestinian poem entitled "Running Orders" by Lena Khalaf Tuffaha describes the experience of a well-known Israeli military procedure as seen through the eyes of a Gaza resident:

With the end of "Operation Protective Edge" on 26 August 2014, the international community is preparing to investigate numerous cases of suspected war crimes committed by the warring parties. In attempt to counter these allegations, a legal team established by the Israeli military will argue that policies like the one above, known as the "knock-on-the-roof," demonstrated Israel's humanitarian concern for civilian safety as it attacked alleged Hamas targets in Gaza.

The legal team would be right in saying that the knock-on-the-roof helped to prevent further casualties from occurring, at least to some extent. However, these arguments conceal the real effects of the policy on the ground, namely that countless civilians were displaced, traumatized, wounded and even killed as a result of these "knocks." Together with the missile strikes and ground incursions that killed over 2,100 Palestinians (about 70 percent of them civilians) and injured thousands more, Israel's "precautionary measures" during the war in fact exacerbated the humanitarian crisis in Gaza.

Firstly, the Israeli military claims that roof-knocking was an effective method of warning to avoid harm to civilians. These knocks, however, do not reflect the soft tones the nickname implies. The knocks are bombs that exert enough force to damage or shake an entire building, causing possible physical harm and inducing tremendous fear to residents inside. The panicked families are left rushing to warn neighbors of the incoming strike, while chaos ensues as people try to escape the firing zone. The densely populated Gazan neighborhoods and refugee camps add further difficulty for people to evacuate quickly during these life-threatening emergencies. More troublingly, there were several cases in which these supposed warning bombs directly hit and killed civilians, including three boys who were feeding pigeons on the roof of their home.

Secondly, the military claims that it exhausted all efforts to ensure that civilians were adequately warned ahead of a strike. However, the roof-knocking cases reveal that there was no consistent or reliable application for its use. The process ranged from initiating phone calls before the knocks, to no calls or knocks at all. On several occasions, a knock was issued but the strike did not commence until hours later, posing a danger to residents who fled their homes or who believed they were issued a false alarm, and thus returned to the targeted sites. Other cases showed the opposite, in that many residents had insufficient time -- mere seconds or minutes -- to distance themselves from the explosion and debris caused by the strike, resulting in deaths and injuries. Thus instead of being a "considerate" alert, the knock-on-the-roof became a symbol of fear, unpredictability and chaos.

Thirdly, Israeli officials contend that the military's liability for civilian lives ended once they issued their warnings. But this is legally, practically and ethically wrong. In addition to the harm above, the knocks and subsequent missile strikes were directly responsible for the displacement and dispossession of Palestinian families, forcing them into homelessness and poverty. This was further compounded by the fact that there was nowhere to run in Gaza. Between the closure of land crossings, overcrowded cities, overstretched humanitarian facilities, the targeting of hospitals and shelters, and air strikes in nearly every part of the small territory, Gaza more than ever resembled a turbulent prison where Palestinians were even denied the right to be refugees.

These devastating impacts of the knock-on-the-roof have been witnessed before. In the investigation into "Operation Cast Lead" of 2008/9, the UN Fact-Finding Mission on the Gaza Conflict concluded that roof-knocking was an ineffective warning that "constitutes a form of attack" against inhabitants of targeted buildings, and that was more likely to "cause terror and confuse the affected civilians" than help them to safety. In short, contrary to the Israeli legal team's expected claims, roof-knocking does not legalize what has clearly been deemed a crime under international law: the collective punishment of civilians. Even if military targets were embedded in civilian areas, there is rarely a military or moral reason to excuse the disproportionate harm caused to thousands of civilians through these measures. The fact that Israel has launched offensives on Gaza three times in the last six years, all while maintaining an eight-year blockade, further proves that its military policies do little to bring the security that its officials use to justify them. Their only result, despite the myths to cover them up, is to make Gaza's dire humanitarian conditions a permanent feature in the lives of its people. Until those policies end, more Palestinians can be threatened with the same message by phone, explosion or missile: "Your house is next...Run."