We knew our "Humor Code" panel, last Saturday at the Bridgetown Comedy Festival in Portland, wasn't going to go as planned when comedian Mary Mack showed up on stage for it with two beers, three energy drinks, three waters and a Swiss army knife.

We'd thought the event would be so simple: We'd talk a bit about our Humor Code project, including our research on Mad Men-style drinking and sex-ed PSAs. Then our very capable moderator -- Jordan Morris of the "Jordan, Jesse, Go!" podcast -- would turn it over to our all-star lineup of comedians (Pete Holmes, Myq Kaplan and Mary Mack) for commentary. But we forgot to factor in one thing: A bunch of professional comics, on stage, under a spotlight, in front of a packed house.

Clearly we were asking for trouble. 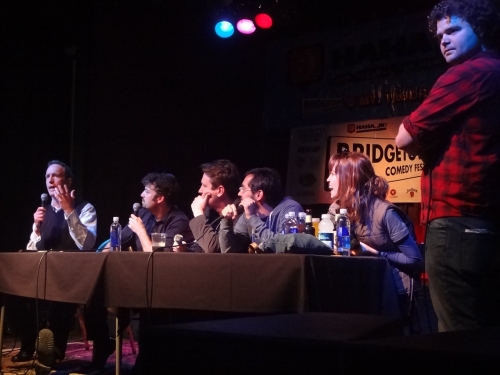 Things veered off the rails from the get-go when Pete Holmes decided he'd be the one to describe our humor theories -- theories he knew nothing about -- going on and on as if he were the boy genius from Good Will Hunting. The other comedians joined in the fun, with Mack insisting on raising her hand every time she wanted to say something, like she was back in school.

Still, despite the hijinks, we managed to carry on a wide-ranging conversation on everything from comedians' drinking problems to the gender inequality to whether or not science has anything to offer stand-up comics.

Click above to listen to a recording of the event, and down below you'll find the slides we used to display our findings.

And just so you know, Mack only used the Swiss army knife to open her beers, although a few times she did point it at us menacingly.

A version of this story originally appeared on Wired.com.