It’s kind of remarkable how entertaining “The Hunger Games: Catching Fire” turns out to be, especially once you take into account just how many scenes are basically repeated from the first film.

If we want to compare the three “The Hunger Games” books (or the eventual four “The Hunger Games” movies) to the original "Star Wars" trilogy, having Katniss Everdeen (Jennifer Lawrence) compete in another Hunger Games tournament so soon after the first one would be like “The Empire Strikes Back” featuring another attack on another Death Star. (As we know, that attack on another Death Star eventually happened in “Return of the Jedi,” but George Lucas was smart enough to to wait six years; even with that gap, though, history has decreed “Jedi” inferior to both “The Empire Strikes Back” and the original “Star Wars.”) Yet, the second feature installment of “The Hunger Games” is better than the first movie.

To be fair, there’s one other issue regarding my enjoyment of “The Hunger Games: Catching Fire”: I had not read the book.

Now, I had read the first “Hunger Games” book before seeing the first movie, and I do wonder what kind of effect that had on my personal enjoyment of the movie. I liked "The Hunger Games" as a film, but reading the book first created a completely different viewing experience. Instead of thinking I wonder what happens next, the mindset became Please don’t mess this up. The problem is that the book is always going to be better than the movie, because your imagination has a much bigger budget than a movie studio, and it can get every last detail just right. (It took me years to appreciate the theatrical version of “The Firm” -- which was directed by the great Sydney Pollack, I should add -- for this very reason, because the version in my mind was much better.)

I asked the director of “Catching Fire,” Francis Lawrence, about this very aspect, and he admitted that it's a challenge. “Somebody who has read the book will not experience the movie in the same way,” he said. (The full interview will publish the week of release.)

My point is, having not read the book, I was genuinely surprised by the twists and turns in “The Hunger Games: Catching Fire” (as opposed to the first movie, which is for the most part -- despite the horrors of kids killing other kids -- fairly predictable).

“The Hunger Games: Catching Fire” picks up not long after the events of the first movie. Katniss is back at home, trying to live a normal life -- at least as normal as can be after winning a to-the-death-royal-rumble tournament. There in District 12, she rekindles her relationship with Gale (Liam Hemsworth, playing a character that still isn’t that important in this second chapter), while also having to force-feed the general public with her unadulterated love for co-Hunger Games champion, Peeta (Josh Hutcherson).

After some unfortunate occurrences on an awkward and manufactured Katniss-Peeta victory tour, the new games are announced -- and this time it's an all-star version of the event that will only feature former winners of the Hunger Games. Of course. Katniss and Peeta find themselves back in the tournament they had just won a year earlier.

This is where the problems for the movie start. Because once again, we have another training montage. Once again, we watch the contestants get introduced on chariots and, yes, again burning wardrobes are involved. (The effects in this part are noticeably better than in the first film.) Once again, each contestant must appear on Caesar Flickerman’s (Stanley Tucci) televised pre-games variety show. (Honestly, Tucci should be handed some sort of lifetime achievement award for hamming up a role to the point of intentional hilarity.) Even with a few changes here and there, it’s all very repetitive.

But once we get into the actual Games, everything changes. These aren’t kids fighting kids any longer (one contestant is elderly), and we actually get to know at least a few of Katniss’ opponents to where we start to like them. This is very different than what we experienced in the first “Hunger Games," and the end result of the Games is nothing like what happens in the first movie. There’s an emotional weight to these Games that wasn’t present in the first film, because we actually care about more characters than just Katniss. (To be fair, we did care about Rue in the first film, but only because Katniss cared about Rue. Rue was not a talker and we didn’t know much about her other than that she was young and innocent –- but a lot of people in the first movie were young and innocent.)

“The Hunger Games: Catching Fire” has a somewhat long running time, but it doesn’t matter. I hate worrying about the length of a movie -– any film should be however long it needs to be to effectively tell its story -– but, yes, there’s nothing worse than a bloated film that has me thinking, Boy, how long is this? When “Catching Fire” ended –- by that point, the repetitive aspects of the film were long since forgotten -- I wanted more. And that’s one of the best attributes that a movie can have. 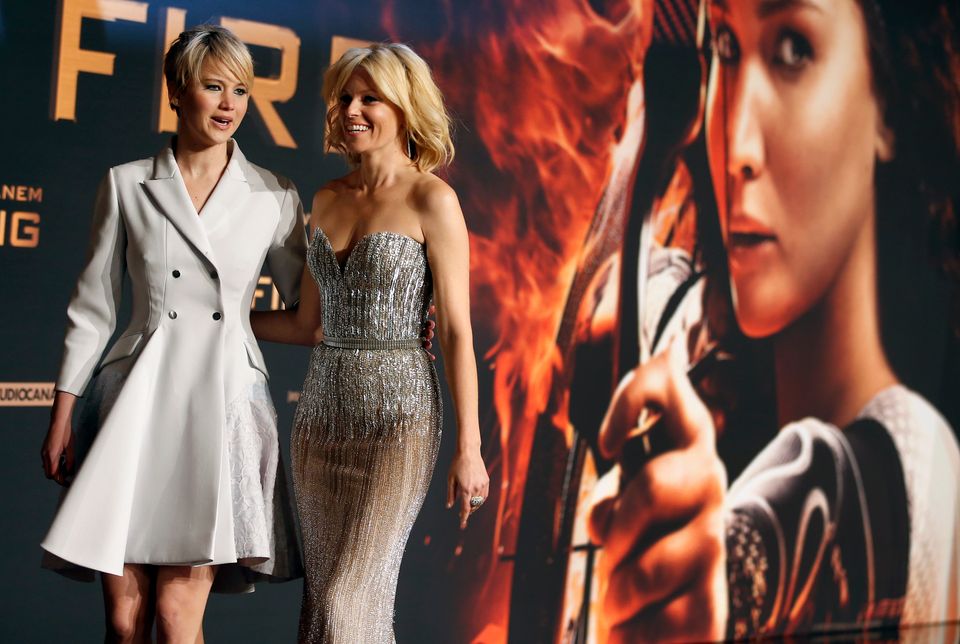 1 / 30
Actresses Elizabeth Banks, right, and Jennifer Lawrence, both from the US, pose for photographers as they arrive at the German premiere of their movie "The Hunger Games: Catching Fire" in Berlin, Germany, Tuesday, Nov. 12, 2013. (AP Photo/Michael Sohn)
AP