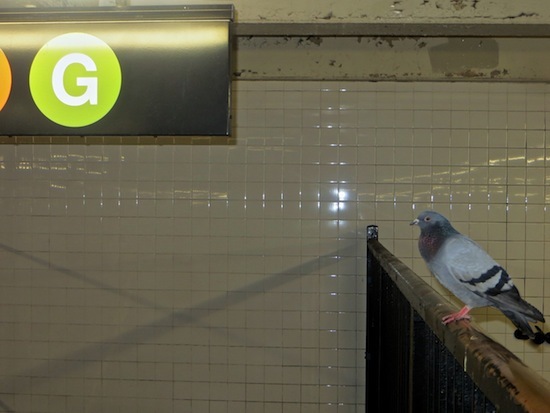 As Hurricane Sandy approaches, a pigeon in Brooklyn finds a hub transit station a safe environment - and navigates the storm and afterwards there

New York City was shutting down the entire subway system at 7 p.m. on October 28, 2012, encompassing 469 stations, normally in operation 24 hours a day. Parks would become off limits after 5 p.m., all in anticipation of the event that we now know as Superstorm Hurricane Sandy. It all seemed extreme. Nothing ever closes the Big Apple, the City that Never Sleeps.

Mid-afternoon that Sunday prior to the shutdowns, I dashed on the F train into Manhattan to take pictures of the closure of Washington Square Park - it was such an unusual occurrence, I wanted to document it for a blog I write about the park. There was a quiet, eerie and contemplative feeling in the air. The 10 acre park was close to deserted half an hour before the closing, except for a few people including actress Meg Ryan walking through with a friend - funny as she is famous for the scene outside the Arch with Billy Crystal in "When Harry Met Sally." It was a rare chance to have the space almost all to myself. I documented the impending closure and current emptiness in photos, and headed back to Brooklyn.

It was now late afternoon as I got off at the Church Avenue F train station. I noticed a lone pigeon walking around underground near the stairs that led to the street. A man who was exiting at the same time said, "That must be the smartest pigeon in New York City." I smiled, agreeing; but also worried about what would happen within the station during the storm. The bird seemed so vulnerable. He was right, though -- this would be a hulking structure of protection whereas, on the streets, no one knew what might occur. I went to the nearby deli, bought the bird some food, a muffin would have to do, she ate it, and then she disappeared into the station. 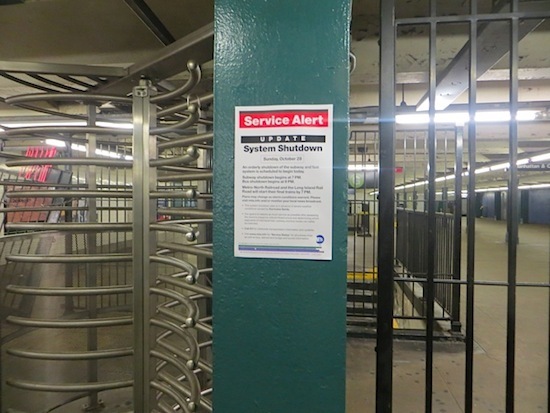 The Church Avenue train station is larger than most; it is a hub station located in the neighborhood of Kensington. There are MTA offices, bathrooms for the public were built within the last few years, as well as elevators. The station only houses two train lines (F and G), but, for some reason, a lot of operations are contained within it. There are two main avenue public entry points and they span more than a city block. You can walk within the station along lengthy, narrow walkways to the different entrances which can be a bit spooky when no one is around. There are cameras focused on these corridors but, who, if anyone, is watching is unknown.

That weekend, in preparation, people stocked up on emergency supplies: candles, flashlights, extra food and water. The peak of the storm came Monday night, October 29th. Holed up in our apartments, we watched and listened as the wind and rain thrashed its way through Brooklyn. The next day, in my neighborhood, there were downed trees on some blocks but not mine. Not far away, a young man and woman, both political activists, had gone out to walk their dog that fateful night, the pair were hit by a falling tree and killed.

In my blog area of Greenwich Village, there was no electricity: the street lights were out and areas near the Hudson River flooded.

Seven subway tunnels flooded impacting the entire system; it was the biggest disaster in the subway system's 108 year history and it was unclear when train service would resume.

On Tuesday, once reports came through that it was safe to cautiously walk around, I went back to the Church Avenue station. I was able to walk down the stairs into the vestibule area. The turnstiles were roped off with yellow tape: Do Not Enter. Through the bars, I saw the hardy pigeon. I identified with her perhaps. I brought bird seed, throwing it between the bars to the off-limits area; my new friend made her way over, eating steadily.

The next day, the entrances to the station itself were closed, prohibiting entry to the stairs and inside. I tried for a workaround: I aimed bird seed through the gates down the steps hoping some made its way to the bottom. There was unlikely to be food within a deserted subway station without some assistance. 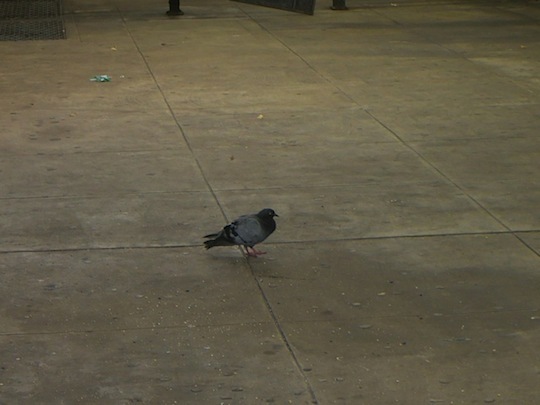 Above: Hurricane Sandy pigeon before the storm

The New York City subways did not begin running again for three days after the Hurricane Sandy shut down and then only with limited service; in Brooklyn, people had to take buses from downtown Jay Street to get into Manhattan. It was a week after the city-wide shut down that the Church Avenue station began operating again.

The pigeon had fared well though and seemed comfortable within the massive station. Once trains resumed, I would look for her when I took the train, and on other days during neighborhood walks, bringing sustenance for her with me which I provided as discreetly as possible.

She came to know me: when I walked down the narrow, cave-like corridor, she would recognize me from afar and fly to meet me, landing within steps of my feet. It was an amazing thing to witness - this pigeon masterfully and elegantly navigating the underground space, often flying over 30 feet. Sometimes it felt I was the only one who noticed, except one day I heard one of the workers mention her, he seemed both proud and protective of this survivor bird.

I never gave the Hurricane Sandy Pigeon a name. When I saw her, I would greet her typically with Hi, my friend.

Her routine seemed to consist of walking throughout the large territory during the day, at times sitting calmly in the middle of the station floor or perching on a ledge, and then, as the sun went down -- despite the fact that there were glaring, bright lights day and night -- she retired to her roost to sleep. She found the perfect spot, and was mostly undetectable, which allowed her to sleep comfortably. A long silver pipe went along the length of the corridor of the station, and, above it, about eight feet or so off the ground, there were compartmentalized nooks. This was where the Hurricane Sandy pigeon would sleep. Unless one knew of her existence, subway passengers bustling through the station wouldn't notice or even look up -- except for me, who smiled as I walked by and looked up to see the pigeon sitting there, sometimes watching me. I tried not to give away her hiding spot, very aware of a camera following my movements.

Once in awhile, I saw her venture down to the lower platform level near the tracks looking for food or perhaps to diversify her routine, but, mostly, she seemed to remain on the upper level. When it rained or snowed - and even when it didn't - water would pool in various places near the stairway entrance where I'd first spotted her; that became her water source and how she would clean herself. Sometimes she would sit on the railings surrounding the stairs leading up from the platform and take in the whirlwind human existence passing by.

The New Year came. One day, another, mostly black pigeon appeared - now there were two! (Hurricane Sandy pigeon was medium-to-dark grey, what we consider the stereotypical pigeon colors.) The new arrival followed the subway veteran around, realizing that she had figured out a survival system, plus she was the only bird around. But this one seemed less refined and younger, more anxious. While glad that the first now had company, I also thought they will never allow two pigeons to live in the station. It did not become an issue because, the next day, the other bird was gone. (I hope he found his way out and left willingly or maybe H.S.P. said, Hey, this is my turf. Find your own.)

People often malign these birds but pigeons are wondrously smart. Remarkably hardy, they are deserving of our respect and help. Really, all New Yorkers (all people?) can identify with them - they are stalwart, figure out ways to survive, and create their own communities. 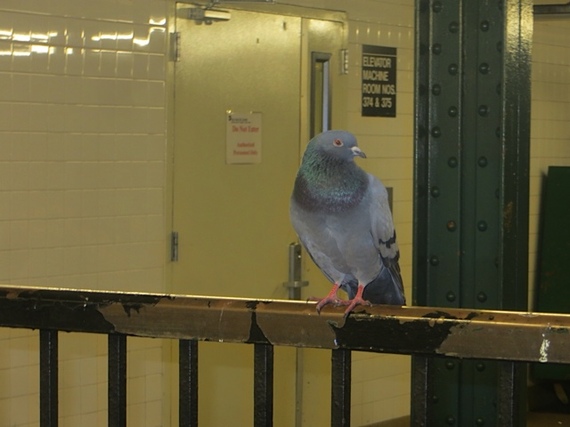 As spring approached, one day, I attempted to lead the Hurricane Sandy pigeon out of the station. Like a scene out of Hansel and Gretel, leaving birdseed instead of crumbs, she followed me along an extended passage way and up a few steps - so close to the outside! Somehow there were no people around. I thought she would rather be outdoors with a flock. I was also not sure how long she would go unnoticed there before someone decided she should leave. But, as far as she followed me, she would not venture up the curve of the stairs that would show the sky, and she turned around, hustling herself back into the station.

Some more time went by, and the steadfast pigeon was surviving well. But one day, I didn't see her. It was not the first time but usually I would then come across her in the next day or so. I looked around for a few days in a row, but, after a week, checking everywhere I could: it became clear that the bird was gone.

I like to think that she found her way out and is now part of a thriving flock, regaling them with stories of her time living underground. Perhaps someone from the MTA brought her outside. Maybe I was better off not knowing.

I still look for her sometimes when I walk through the station. I remember the way she would fly majestically through it to meet me or sit confidently on the railing with the big F/G sign behind her or roost up above and peer curiously down at me. It was like we had our own secret within the Church Avenue subway station. The smartest bird in NYC? Possibly.