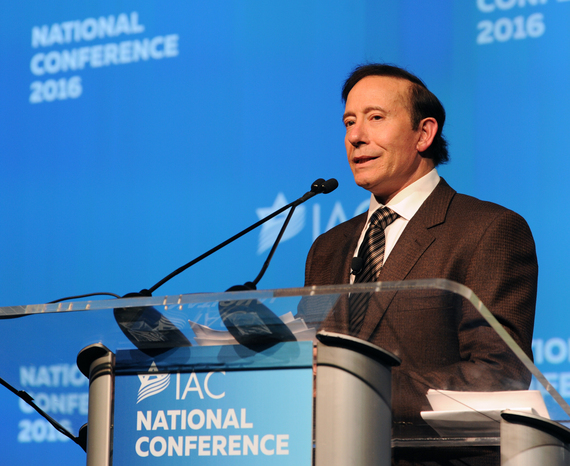 The remarkable three-day gathering made it clear that the Israeli-American community is stronger than ever before. In 2014, the first year the IAC held a national conference, 650 people attended. Last year, that number doubled to 1,300. This year, more than 2,000 people from across this country and across the ocean.

What is driving this rapid growth?

We have not just been building an organization, but a Movement, rooted in entirely new Israeli-American identity.

Before we founded the IAC, no one used the term "Israeli-Americans" or "Americans of an Israeli descent." Now we proudly embrace our Israeli-American identity, which is centered on the idea that we love our home in America at the same time remaining deeply connected to our Jewish homeland, which will always be in Israel.

And around that identity, we have united, energized and engaged the Israeli-American community like never before, with a unified vision, a clear mission, and a powerful voice.

Over the past three years, with the support and visionary leadership of Dr. Miriam and Sheldon Adelson, the IAC has grown from Los Angeles to 10 regional councils, with activities in 27 states, engaging 250,000 Americans of Israeli descent nationwide.

Just this past year, we added three regional offices, opened our first IAC community center in America, and added IAC Eitanim and IAC Lead, two unique and impactful programs for the next generation. The Israeli-American Coalition for Action (IAC for Action), our sister advocacy group, in partnership with other major Jewish organizations, championed legislation to prevent companies engaging in discriminatory boycotts from doing business with the state of California. At the conference, I broke the news that California Governor Jerry Brown had just signed the bill into law.

We have been able to leverage our unique hybrid identity to bring Israeliness to the Jewish community in America, reinforce the ties between the Israeli people and their American counterparts, and actively support the State of Israel in its campaign against the growing tide of delegitimization and antisemitism.

At our first plenary, Natan Sharansky, the famous refusnik and head of the Jewish Agency for Israel, explained how the Israeli-American identity has made the IAC the fastest-growing Jewish organization around today.

"Our feeling of responsibility and fearlessness in Israel, combined with the freedom and choice in the Diaspora, is a new identity that can be very powerful," Sharansky said. "We always will have different opinions, the important thing is that we have one identity, one history, and we want to guarantee our future."

Israeli-Americans, who comprise 15 percent of America's Jewish population, are a key asset in helping American Jews connect to Israel. In his remarks, Barry Shrage, CEO of the Combined Jewish Philanthropies of Boston, summed up the IAC's impact best: "I feel like I am at the crossroads of Jewish history here." Shrage was also featured in a short video at the conference.

"This is a community of immense talent, energy, and resources--and for the longest time they were hanging out outside the formal part of the American Jewish community," he said. "[The IAC] brings them right into the middle of it, and we need them."

Two distinguished American politicians spoke about the importance of Israeli-Americans in strengthening the U.S-Israel relationship: former New York City mayor Rudy Giuliani and Sen. Chuck Schumer, who said in his speech, "The Israeli-American community has made our country, and particularly my home state of New York, the vibrant, ascendant and optimistic place that it is today."

By building deeper partnerships between Israeli-Americans and Jewish- Americans, we will make Jewish life in America more vibrant and we will strengthen the Jewish community to stand up and fight against the growing antisemitism in America and all over the world.

Active Philanthropist and National Chairman of the Israeli-American Council