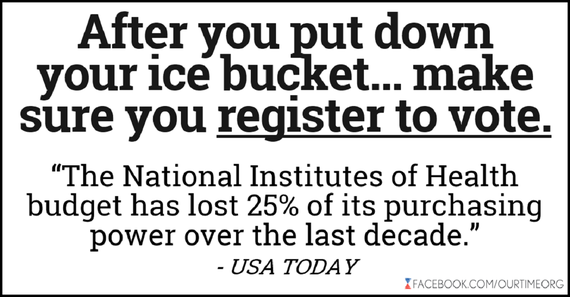 Bill Gates, Lebron James, and Wisconsin Governor Scott Walker don't ostensibly have much in common. But they've all recently poured buckets of ice on their head in support of ALS research. Yes, members of this motley crew -- alongside hundreds of your Facebook friends -- have posted viral videos of themselves shivering gleefully in order to raise money for a good cause. And while their videos have been unquestionably successful in terms of raising awareness (1.2 million videos uploaded) and funds ($13.3 million contributed) on behalf of an intractable disease, they have overlooked the most important message of all: vote.

According to Dr. Francis Collins, the director of the National Institutes of Health, his agency has lost 25 percent of its purchasing power over the last decade due to draconian federal budget cuts coupled with inflation. Why does this affect ALS? Because according to the ALS Association, the NIH is the single largest source of ALS research funding in the world. But in 2014, the NIH has seen their funding slashed 5.1 percent, and their total budget is now $30.15 billion, down from $31.2 billion in 2010.

"We are throwing away probably half of the innovative, talented research proposals that the nation's finest biomedical community has produced," Dr. Collins told the USA Today. "Particularly for young scientists, they are now beginning to wonder if they are in the wrong field. We have a serious risk of losing the most important resource that we have, which is this brain trust, the talent and the creative energies of this generation of scientists."

So what should celebrities, billionaires, and your Facebook friends really start banding together around? Voting out politicians who cut funding for medical research...

You can start by registering to vote at OurTime.org.