It's night in Reykjavík, 21st of January 2009. Hundreds of people stand in front of the

National Theatre, making carnivalistic rhythms by hitting drums, shaking tambourines, hitting cans with pens/phones/sticks, and rattling moneyboxes, dancing around a camp fire on the sidewalk in front of the National. It's not the opening of a new play that draws people down to the theatre. People are chanting "incompetent government." Inside the house, in a club in the basement, the Reykjavík division of the Social Democratic Alliance are discussing their coalition with the Independence party in the government.

Sunday-evening 5th of October 2008, Iceland was the sixth wealthiest country in the world. At 4.05 pm October 6th, the Prime Minister of Iceland delivered a speech on radio and TV: we're trying to avoid a national bankruptcy.

Soon people started protesting. Every Saturday people have been gathering at Austurvöllur, a square in front of Althingi, the Icelandic Parliament. A few hundred at first, soon a few thousand people at a time. Listening to speeches in the cold wet winter.

Facing bleak times with two digit inflation, two digit unemployment, currency restrictions and then some, people have been making their voices heard.

The turning point was on the 20th of January. Thousands met in front of the parliament, bringing pots and pans, drums, anything that made sound, noise. Instead of listening to speeches people chanted, shouted "incompetent government". The rhythm connected people with each other, creating a somehow tribal atmosphere.

Again, people met in front of the Parliament around noon on the 21st. When a funeral ceremony started at the Dómkirkja church aside the Althingi, protesters moved to the government offices where the Prime Minister ran to his car. People surrounded his car, tapping on the windows and roof, and standing in front. The police task force was pushing people away so the Prime Minister could make his way to a meeting with his party. Eggs were thrown, snow too. 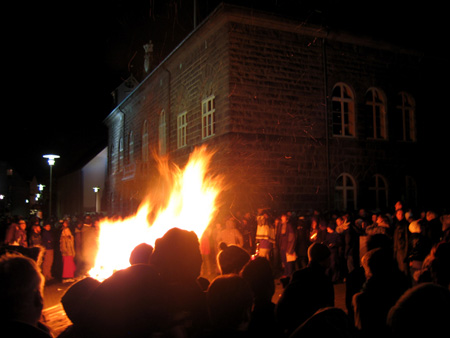 It's night in Reykjavík, around 10pm, 21st of January. A man with a megaphone announces that the meeting has concluded and that the Social Democratic Alliance should break up the government and demand elections to take place in the spring. People cheer. People hug each other. Instead of "incompetent government!" people sing "Áfram Ísland" a motivation used in sports for the Icelandic national teams: "Go Iceland!".

People walk down to the Althingi, with some provoking the police, but most of the people are singing, clapping. Late at night, a few people throw stones at the police, injuring two badly. Other protesters line up in front of the police, making an unarmed human shield. Teargas and the show is over.

Today, January 22. It's early morning in Iceland, late at night in the US. My Facebook shows people are protesting again today. Recent research shows that 95.8% of Icelanders in the 20-29 age group have their profiles on Facebook. From the age of 13 and up, 46.9% of Icelanders is on Facebook.

Icelanders have been rather frigid when it comes to protesting. We don't have the culture of crowds. There are no subways, no train stations. Our culture of cafes is rather young. The University of Iceland, the biggest university, has until recently been scattered around Reykjavík. Facebook has made a great social impact. The Internet has played a vital role in the 110 days since the crash on October 6th.

People are probably meeting at 10.30am at the Parliament. The messages from the meeting of the Social Democratic Alliance were precise last night. Their chairman and Minister of Foreign Affairs, Ingibjörg Sólrún Gísladóttir, is at a hospital in Sweden being treated for her brain tumour. She'll be back to Iceland tomorrow. Will the party wait for her to break up the coalition with the Independence party or not? Will the government resign?

It's 10am in Reykjavík. It's not bright yet, although the sun is breaking it curfew, staying up for a few minutes longer every day.

Iceland. We've come to a conclusion: the laissez faire experiment has failed. Big time. Our message to the rest of the world is: don't try this at home.