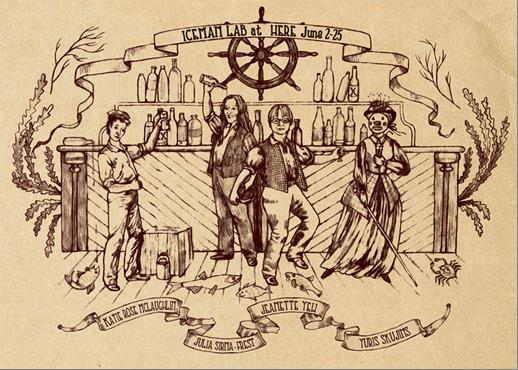 The Iceman Cometh is one of those plays from the American canon whose name evokes a pretty specific theatrical mood and style. Though it is not one of Eugene O'Neill's four Pulitzer Prize-winning plays, the sprawling length and the melancholy tone easily identify the play as the work of the man often considered America's first great playwright. What could possibly be next for a seemingly sacrosanct play that has been done countless times? Well, when Target Margin Theater, a company known for their experimental interpretations of classic works and support of creative theatrical artists, takes on Iceman, the possibilities are both limitless and exciting!

As a part of their two-year exploration of O'Neill, TMT has just begun performances of the Iceman Lab, a four part performance series dedicated to exploring all four acts of The Iceman Cometh. The Iceman Lab will be performed at HERE Arts Center from June 2nd - June 25th, and will consist of Iceman Act I, a sing-a-long cycle by Julia Sirna-Frest, Iceman Act II, a birthday celebration for Harry Hope by Yuris Skujins, Iceman Act III, an all-female dance exploration by Katie Rose McLaughlin, and Iceman Act IV, an audio and live-action puppetry journey by Jeanette Oi-Suk-Yew. I will be covering all four of these performances in a series of articles, so please follow along!

But before we get into the actual performances, I asked Artistic Producers and Lab Curators Sarah Hughes and Moe Yousuf a few questions about this upcoming Lab project. Here's what they had to say.

Bess Rowen: The Iceman Cometh is one of the many O'Neill plays that is, by today's standards, a very long play. Why choose this particular play to break up into different pieces, often performed on different nights?

Sarah Hughes: I think it was originally David's idea to do this; practically, it's just a way to present material that would normally be too long for the Lab format (of course, by presenting two marathon performances we're throwing that "short-form" idea to the wind). Curatorially, I think it works well with this particular piece because a) many people know the story already, so seeing it out of order doesn't make it hard to follow and b) each Act is much like the others, in terms of where it's set, the characters, the pacing, the plot. The whole point of Iceman is that it's repetitive, and very little happens or changes from the beginning to the end of the play, so having each Act led by a different artist is almost like seeing the same play four completely different ways.

Moe Yousuf: We wanted our Lab program to be as ambitious as the play itself. And we wanted to do BIG works by O'Neill and avoid the smaller stuff, the sea plays, the one acts, all of which have recently been done. The Lab is truly about experimentation on an ambitious but modest budget. Breaking the play up enabled us to support four amazing artists with different perspectives and aesthetics AND turn what's generally a five hour production and into a four week festival and celebration of the work. It gives you time to sit with the play over time and gives an audience a new way to experience a familiar play in a very new way.

BR: Do you think O'Neill is still relevant as written? What do you take away from producing and seeing these pieces today, and what do you think it's time to leave behind, if anything?

SH: Coming into working on the O'Neill season, I have to say I was a little skeptical. I hadn't read a lot of O'Neill and I found what I had read pretty dated and often just totally laughable. And I had only ever seen one piece; a community-theater production of Ah, Wilderness! about 15 years ago, which I just remember being really long. But reading some of his lesser-known work, and becoming so familiar with Mourning Becomes Electra and The Iceman Cometh, I started to understand what might be interesting and important about O'Neill. He might be a great writer, or he might be sort of a bad brilliant writer, but the point is that he was mashing up all these ideas about psychology and dramaturgy and melodrama and interiority and presentational-ness and theatricality - and while the result is sometimes a mess and sometimes overwrought, it's kind of revolutionary when you let the inconsistencies and the mess come through in a staging. He goes from one style to another so quickly in the space of a moment -- let's feel how crazy and awkward that is! Let's watch an actor really push the extremes of that! Let's exaggerate it even more! Doesn't that somehow perfectly get at some of the crazy shit that's happening inside our heads all the time?

What excites me about what Target Margin is doing with this work is that we're not afraid of seeing the sloppiness, the roughness, the manifestations of the process that O'Neill was engaged in as a writer. We're not trying to tidy it up, and we're not constrained by reverence for the material or the man, or by expectations of how an O'Neill play is supposed to look and feel. This writing is actually incredibly weird; why are we always staging it in these straightforward ways? No offense to The Goodman, BAM, or the Roundabout, but why do we always just have a bunch of white people trying to stay in some kind of believable Method-acting character? That's the thing we should leave behind, and that's what we're trying to do.

MY: O'Neill stole from the Greeks so if the Greeks are still relevant then so is O'Neill. Actually when rereading Iceman I was surprised at how familiar the characters were to me and how modern the language is. We joke about O'Neill being a bad writer, that his plays are clunky and overwritten, but when you look at what he's getting at underneath the work, the heart of it all, you understand it's all intentional. Some of his plays still don't work for me and I wonder...hmmm, maybe we should do the really terrible ones (and maybe we will next season), but out of all O'Neill's work Iceman seems the most concise criticism of the American Dream. It's great a play. I'm not afraid to say it. My big takeaway from spending a year with O'Neill is that he was a relentless experimenter. When you really get into works like Strange Interlude, Dynamo, Marco Millions, and Mourning Becomes Electra (which we're fully producing next season at the Abrons Arts Center as part of our 25th anniversary season) you see an older artist still challenging himself and audiences, knowing there is more out there to discover on the stage.

BR: What do you want people to know about this series?

SH: The best thing about the Labs for me, as a curator and producer, is having no idea what they will be until I see them on opening night. We narrow down some material, we find some artists interested in pushing their own boundaries, we book a venue...and everything else is totally unknown, and up to the artists. It's the craziest prep process because we are budgeting and planning for something that is yet to be defined. Just a few of the requests we've had (and accommodated) this time around: Can I get a popcorn machine? Can I dye the popcorn red and feed it to the audience? (Yes, yes and yes - thanks to our friends at The Tank!); Can I turn The Iceman Cometh into a glam-rock concert? Do you know anyone who owns a oom-pah-pah marching bass drum? (Yes, and, sadly, no, but we'll help you look!); I want to perform The Iceman Cometh as a dance piece and I need to pour 6 gallon jugs of water on the floor during my shows. Is that OK? (Um, yes.); I need to cast 14 people in the next 7 days. Can you help me? (Yes!)

This is what makes my job insane, and fun, and it's why the Labs are so important! Artists are asked to make strong choices, but Target Margin is totally supportive of those choices being crazy and outlandish. We want to see artists challenging themselves and our audiences, even when the material might be something we all think we know really well.

MY: To our knowledge there has never been a production of The Iceman Cometh like this (broken up by Acts, with each Act by a different artist) and there likely never will be after. So... it's a BIG DEAL. Not only for us, but for the community. We know we're asking a lot of people, to come to HERE multiple times in June to see each Act or to come to one of our two 5 hour marathon performances. But look, this isn't your grandfather's O'Neill. This is Target Margin's. If you want to see Kevin Spacey kill it, go watch House of Cards. If you want to see one of the most original productions of the most well-known and referenced dramatic work in the English language, come to the Iceman Lab.

SH: Come see the Labs! I couldn't be more excited. See each show separately or (recommended!) come to a marathon on June 11 or 18 and see a concert, a play, a dance piece, a puppet-video-extravaganza ALL AT ONCE. (Free whiskey and popcorn!)

MY: I want to recognize the amazing work our lead artists have put into the production. Julia Sirna-Frest, Yuris Skujins, Katie Rose McLaughlin and Jeanette Oi-Suk Yew are all incredibly talented and ambitious and push harder as producers everyday to realize their ambitious pipe dreams putting this piece together. And I wouldn't have it any other way. We also have a ton of free programming including a staged reading of Beyond the Horizon by Associated Artist Ann Marie Dorr, a special works-in-progress showing of Strange Interlude (in partnership with Transport Group), a special Theater Making Workshop with Military Veterans co-led by Maurice Decaul and United War Veterans Council, and an O'Neill Pub crawl with biographer Robert M. Dowling.

You can see the schedule of performances and purchase tickets to all four Acts here. My next article will cover Act I and Act II, so keep an eye out for that. Also, as an added bonus, piece I write will experiment with form in order to respond to the creative approaches that these artists have so boldly undertaken.