Once, years ago, walking across Louis Kahn's magnificent campus designed for the Salk Institute, Jonas Salk answered my question about how he had seen so clearly what others had not seen. He said, "The answers are not the hard part. It is the questions. Asking the right question. That's hard."

We are about to enter yet again into the great debate over American health care, and the discussion once again will be mostly couched in financial terms. I want to suggest money is the wrong question, and it leads us to the wrong debate. Here's what I think we should be asking: Is the health of the American people an essential part of our national security and prosperity? Is America better equipped to deal with the challenges of the 21st century when it has a healthy population more capable of working at its full potential? If the answer is "Yes," then the next question to ask is: Why is our health care system so very bad -- 37th in the world according to the World Health Organization? To answer that, we need to accept this reality and to start fixing it by telling the truth to ourselves about money.

The Center for Defense Information estimates the cost of the Iraq and Afghanistan wars will total over $1 trillion by the end of fiscal year 2010. We have almost nothing to show for these wars, and the sacrifices made by young men and women motivated by honor, duty and a call to serve. Yet we have made these wars such a priority that in the midst of the worst economic downturn in two generations we continue to fund them at a cost of tens of millions each day. It's not about the money.

We have a defense budget that is larger than the defense budgets of every other nation in the world combined -- $683 billion, going to $743 billion in 2015. It's not about the money.

As Senator Bernie Sanders forced the Federal Reserve to reveal we found 3.3 trillion to bail out our financial sector -- to the benefit of a tiny percentage of the population. How can anyone say that when the priority is there the money can't be found? And, anyway, we already spend more on our health care system than any other nation on earth. 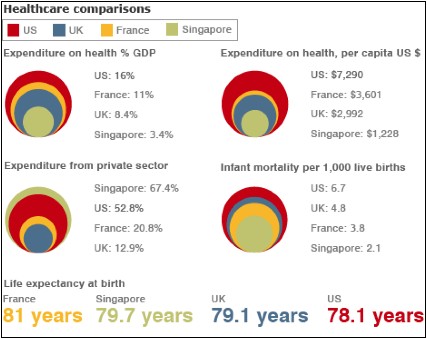 If we believe a healthy nation is a national priority, why aren't we getting results?

Because, measured in a dozen different ways our health care system is not about health. What we have in the United States is an Illness Profit System. The illnesses and traumas of human beings are just the mechanism by which the money taps are opened. It is part of the human condition that everybody gets something that requires medical attention some time in their life, and the Illness Profit System is structured to exploit this. If you get well, it makes money on your treatment. If you don't get well it makes even more money on your treatment. The system is profitable at either end, but weighted towards illness. It's more profitable. If health is a critical component of National Security we have been asking the wrong questions and, I think, having the wrong debate. The result is a system that is ultimately not based on health.