One of the most common questions asked these days is when will the situation [in the Holy Land] calm down? Despite the rhetoric we hear both sides propagate, slogans like, steadfastness in the face of the other; resistance to the violence of the other, and having a united front in combating the other, most Palestinians and Israelis wonder when will the violence stop. When will things return to the normality that everyone seems to have gotten used to? 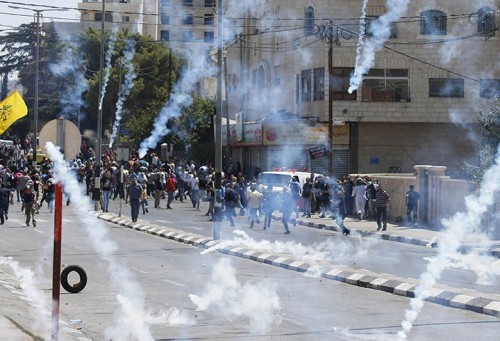 The reality is that the situation is never truly "calm" for those who live under occupation as well as for those who are the occupiers. Any calmness that people expect is nothing more than an illusion created which ignores the reality of the injustice and oppression of the occupation itself. While some might define the word "occupation" in the context of land and statehood, I define it more as the systemic domination of one group of people over the other and the dissymmetry and inequality it creates in the economic, political, cultural, social and civil rights of the occupied.

Creating a sense of calmness became dominant over the past few decades because it promised Palestinians and Israelis alike an end to the occupation, peace, freedom, security, and prosperity. This indoctrination of the minds of the people was done through the establishment of strong political institutions, the signing of countless political and economic agreements, billions of dollars in investments, mechanisms of reward and punishment, and unprecedented numbers of resolutions and symbolic gestures in global institutions such as the United Nations and the International Court of Justice. The Oslo Peace Process and the mechanism of negotiations became the vessels that carried the illusion of calmness because they were presented as the only means to achieving the promises mentioned above.

As the majority of Palestinians and Israelis fell trap to "normalizing" themselves to the illusion of calmness and the illusion of the promises of the Oslo Peace Process, they in turn became its biggest defenders, because it became their bread and butter. When you are hungry and have been blinded to seeing only one fruit-bearing tree in the garden, you will make sure to protect it at all costs. Oslo was presented as that, either Oslo or chaos.

Until recently, and on both sides, those who did not assimilate or "normalize" to the illusion of calmness, challenged it, or suggested alternatives to it became marginalized and even accused of being "normalizers", anti-nationalistic, unpatriotic, unrealistic, naïve or living their own illusion. For the most part, Palestinianism became defined by loyalty to the Palestinian Authority and its agenda and Israelism defined by loyalty to the "defense" establishments of the state, loyalty to its military and/or to its isolationist ideologies.

The time has come for a wider awakening to the illusions created by countless negotiations and agreements, mainly being the Oslo Peace Process and all agreements that came after it. The challenge is not to figure out who is fulfilling or not fulfilling the agreements signed. It is important now to recognize that the foundations of the agreements signed are baseless and in no way meet the real needs of the peoples in the land, (Jew, Muslim, Christian; Palestinian or Israeli).

Real calmness in the Holy Land can only manifest itself if a real peace emerges between the communities of the land, not the politicians. It is a peace that is founded on the principles of mutual trust and respect and a desire to truly bring a sense of justice, equality and equity to all those who live in the Holy Land. It is a peace that addresses the existential fears of the past on both sides and does not allow that fear to be manipulated by the political establishments.

The structures of oppression, control and fear must be dismantled and if not dismantled by choice of the leaders, then dismantled by the force of the people through nonviolent engagement, working in unity and/or separately. A leadership must emerge that is motivated by a vision of peace and justice, not of maintaining calmness, making false promises, and creating space for prosperity of the few.

Some say that breaking the structures created by Oslo can lead to chaos and unprecedented violence; that it is insane to even consider such an option. To those voices I say, look at where we are now? If we had a choice between the insanity of staying attached to the frameworks of the past, that have made all our lives more difficult and challenging, or the choice to break down the illusion and develop new and real models of peace and justice, then what would you choose?