Since I first saw the Houdini biopic and read his biography as a kid, I've wanted to see Houdini's famous Chinese Water Torture escape performed live, and I finally got that opportunity last night at Seattle's 5th Avenue Theatre. The 5th Avenue is presenting a short run of The Illusionists - Witness the Impossible, and the Chinese Water Torture was the finale of Act I. 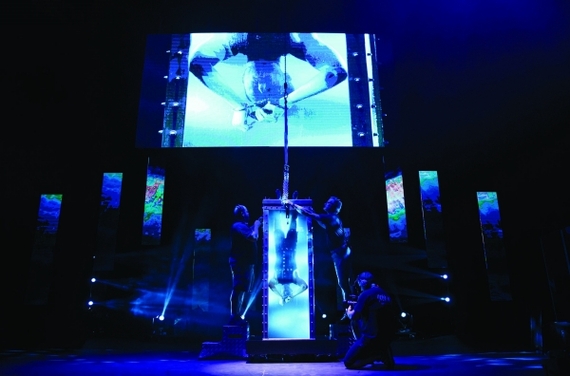 To make it more interesting, escape artist Andrew Basso performed the escape without the traditional curtain covering the water cell in which he was lowered after being handcuffed. The show also had a cameraman positioned in front of the cell broadcasting live to a huge video display above the stage. Add to that the digital stopwatch counting the time Basso had to hold his breath (just over 3 minutes) and tense music provided by the band "Z," and you have an experience that had most of the house watching on the edge of their seats.

Although at times a bit risqué and raunchy (Anti-Conjuror Dan Sperry has a certain Marilyn Manson way about him), The Illusionists is a family show, and the audience was filled with young children eager to "witness the impossible" and believe it to be real magic.

Most impressive to many adults was not the spectacular large stage illusions, but, rather, 24 year old Korean manipulator Yu Ho-Jin who created a great sense of wonder as he made cards and other small objects seemingly appear out of thin air. This was even more amazing because every move of his hands was projected live onto the enormous overhead screen. Still, Ho-Jin seemed to seamlessly create and manipulate cards at will.

All in all, The Illusionists was highly entertaining and genuinely spectacular. It continues at Seattle's 5th Avenue Theatre through June 21 before continuing on its extensive North American Tour.