They come barreling into someone else's country, disregarding laws and sanctity of borders. They live by their own rules. They start taking land, resources and jobs. They steal, sometimes they kill.

So here's an idea. This Thursday, let's have a national day of feasting specifically designed to celebrate the most famous batch of undocumented immigrants ever to plant themselves in the land that we call America.

That would be the Pilgrims. 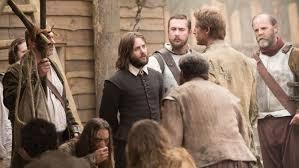 Two quite different TV specials this week, National Geographic's Saints & Strangers (above) and PBS's The Pilgrims, recount at length the story of the British colonists who landed in Plymouth, Mass., in the fall of 1620.

One of their first moves, soon after arrival, was to find an outpost belonging to the people who then inhabited the land, Native Americans, and steal all their seed corn.

Did we mention that some of the English predecessors to these colonists, fur traders who had arrived several years earlier, infected the natives with diseases that wiped out entire villages?

Nor did these immigrants express much concern over collateral damage. As noted in both TV shows, the arriving English viewed the Native Americans as "savages" whose dissipation and ultimate near-dissolution was simply the long-term plan of the English God. The Pilgrims and other colonists were tools of the Lord's will, clearing out the heathen deadwood to make room for His favored people.

It sounds like the worst nightmare of those who fear the subversive potential of immigrants, except that these particular immigrants live today in many minds as the alpha patriarchs of the Real America.

True, America has also been filled up over the years with Irish, Eastern European Jews, Puerto Ricans, Germans, Mexicans and millions of others, including descendants of the African slaves who actually started arriving here the year before the Pilgrims landed.

Equally true, Protestant white guys who share at least nominal kinship with the Pilgrims are still the ones who have largely been running the place for the last four millenia.

Perhaps that's why, for as many Thanksgivings as anyone can remember, we haven't seemed to mind that the Pilgrims were the kind of immigrants who barge into someone else's country and take over, tossing aside existing protocols and customs to instill their own.

Either that or, after almost 400 years, the statute of limitations on inappropriate immigrant behavior has expired.

In either case, seeing a fuller version of the Pilgrim tale is instructive.

Saints & Strangers (Thursday at 7 and 9 p.m.) tells it with dramatic flourishes. The Pilgrims, developed by Ric Burns for PBS's "American Experience" (Tuesday at 8 p.m. and Wednesday at 9:30 p.m.), takes a more traditional documentary approach, with lots of academic experts.

But both take us to the same place.

Immigrants. If you think you can't live with 'em, try living without 'em.