Public perception can beat the shit out of political nuance. The Bush Republicans know this and they have abused it for their own nefarious ends. The Democrats, on the other hand, have somehow overlooked this very basic rule of 21st Century American politics, which is a shame since they would more often than not use it for the betterment of the nation.

After all, one year ago yesterday, we elected the Democrats in overwhelming numbers to amplify our screaming voices to a decibel loud enough to penetrate the unchecked corridors of power in Washington -- we hired this party to speak for us and to use this expressed authority to end the war and to hold this historically unpopular executive regime accountable.

To date and with the exception of some admirable investigations by a few standout lawmakers, the Democrats have done nothing to make good on their mandate from you and me.

It was yesterday, on the one year anniversary of the collapse of Karl Rove's thousand-year Reich, when the Democrats subjected themselves to both public embarrassment and public disgrace, and each within a few hours of the other.

The public disgrace was naturally Senator Schumer's and Senator Feinstein's votes to endorse the Bush administration's pro-torture policy. Make no mistake, despite their wet-bread excuses, that's what they did, say nothing of their endorsement of the regime's unitary executive theory. The reality of the committee vote -- the Democrats' failure to hold their voter-mandated high ground -- is what history will remember. Not the excuses. 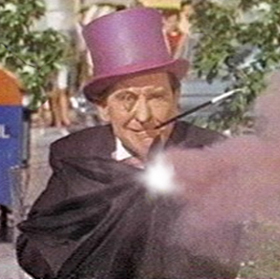 As for the public embarrassment, I'm referring of course to the floor vote on whether to bury a resolution calling for the impeachment of Vice President Cheney. It was a one act tragic-comedy about how fucked up and bizarre our nation has become this decade -- all of it concentrated into a single hour of legislative insanity on C-SPAN.

Vice President Dick Cheney: the most subversive political villain of our time was let off the hook yesterday and the Democrats did all of the heavy lifting to make it happen. Dick Cheney: a man who has proudly committed innumerable high crimes, among them a trillion dollar fraud perpetrated upon the American people and the world -- a fraud which has resulted in nearly 30,000 American casualties and hundreds of thousands of Iraqi casualties. And now he's trying it again with Iran.

Yet there was Steny Hoyer desperately trying to bury this thing; the Republicans, meantime, overwhelmingly voting in favor of the resolution -- daring the Democrats to make it real.

Sure, you and I understand the backwards strategy behind the political theater. The Republicans thought that a debate on the impeachment of Dick Cheney would embarrass the Democrats. Run away! Run away! They said it'll embarrass us, so I guess it will! Run away!

But this begs the question, what made them believe they'd be embarrassed by the clown-car party of Brownie, Mark Foley, Larry Craig and Alberto Gonzales? Easy. Congressman Boehner made them believe it when he strategically rallied enough GOP votes to force a debate. They literally and brazenly dared the Democrats to allow an impeachment debate on the House floor. See, the Republicans still hold a collection of Democratic balls inside a cryogenic flask hidden somewhere on the Mall.

If only the Democrats were attentive enough to the people to realize that a majority of Americans, including a majority of independent voters, support the impeachment of Dick Cheney, they would've treated the resolution with a little more respect. If they acknowledged their mandate and discarded their predictably impotent political habits, they would have had the mettle to at least debate the resolution and entered into the record their collective objections to the vice president's malfeasance, as well as forced into the record the Republican Party's inexplicable support for the man's attempt to undermine their authority. History demands this.

Instead, by engaging in such an awkwardly amateurish fire drill on the floor of the House, Hoyer managed to inject his misguided capitulation into the national debate. He might not know this, but there exists cable news and internet blogs, both thirsting for material. Now, millions of people know that the House Democrats dropped their short pants and stumbled away from the task of holding the vice president accountable -- their trousers bunched around their ankles restricting normal locomotion -- simply because the Republicans dared them to act.

And so in trying to avoid a so-called public embarrassment, they publicly embarrassed themselves anyway.

The average voter doesn't have the time or the patience to analyze the bullshit parliamentary chess match -- the twisted Möbius Loop Beltway routine of asinus asinum fricat. What people know is that Congressman Kucinich introduced a resolution, symbolic or not, to impeach Dick Cheney, and the Democratic leadership crumbled under the weight of a Republican dare -- the House majority leader barely mustering the hand-eye coordination to kill it.

This is what you get when you acquiesce to the Bush Republicans. Under the new rules of American politics, Bush Republicans don't compromise. They don't meet anyone halfway on the important issues. They push back even harder. Popularity doesn't matter. Polls don't matter. To the neocons and Bush Republicans, logic, compassion, reason and rationality are the stuff of the "faggy" left wing.

When the Democrats acquiesce on torture or impeachment or anything that might reunite them with their balls, they're only succeeding in begging the right's aggression. There won't be any favors returned from the Bush/Cheney right wing. I don't think the Democrats fully understand who they're dealing with. And if they do, well then, how dare they play along. How dare they patronize us with I'm against this but I'm voting for it because I'm smart and important and you wouldn't understand anyway.

You stand up and vote NO on torture, Senator Schumer. You allow a debate about impeaching the vice president, Congressman Hoyer. And you sure as shit don't vote to support the administration's Iran policy, Senator Clinton.

In other words, compromising with the White House won't make the president go all limp and soupy -- it will in fact make him louder and more petulant next time around (more from Kos and AmericaBlog here). So please -- by the power of Grayskull -- stop him! We're begging now. I will be satisfied if I never hear his little-man voice and crackly fake twang ever again -- unless, of course, he's saying, "I will resign the presidency effective at noon tomorrow."

Beyond that, and in the awesome words of Han Solo, "Shut him up or shut him down!"

That's what the American people are expecting. Any failure on that score leaves the Democrats in this pathetic ass-up submissive posture. When it comes down to choice of nuance versus aggression, the answer has to be aggression. Take on those bastards with the fury and tenacity these historically imperative issues demand.