I saw a remarkable video once of a man who had been blind from an early age. He was ble to navigate his way around unknown cities and streets through the use of sonar. By making clicks with his tongue and listening to the rebounding echoes, he could "see" the world in sound, in the same way that dolphins and bats can. This astonishing use of sound is testament to the idea that when one sense is weakened or absent, the others compensate and become stronger, almost super-human in their efficiency.

Hannah's senses, as far as I know, are all fine. In fact, her opthalmology and audiology appointments are amongst the very few where I get to hear the words "everything seems to be normal." But, of course, the same can't be said for her abilities. She lacks speech, independent mobility and purposeful hand function. She is reliant on other people for about 98% of her daily existence. Yet, like the blind man learning to see the world differently, Hannah has her own compensatory strengths. Her smile and ability to engage and captivate those around her, even without words, is undoubtedly one. Her intuition is another.

Even from a very early age, long before any signs of "difference" and even longer before diagnosis, Hannah seemed to react instinctively to people -- she knew whom she liked and whom she didn't. I don't expect this is particularly unusual for very young children -- rather like animals, they have an instinct and understanding which takes little heed of social rules or etiquette (babies are allowed to cry and scream when placed in the arms of someone they're not keen on, while toddlers are encouraged to hug and kiss 'Great Aunty Pat' even when they are reluctant!) The thing that always seemed a little unusual with Hannah, though, was that she was invariably right in her judgements. Which is not to say that we frequently introduced her to people whom we didn't like ourselves (!), but she was a remarkably calm and accepting child (symptomatic, apparently, although back then we just assumed she was a "good baby") and it was very rare for her to react to anyone with anything other than smiles. On the few occasions on which she did, let's just say we could understand why.

But there are some people for whom she has always saved the best smiles, and she has been unfailingly right in her instinctive judgements of them, too. Hannah didn't meet her Grandad, my Dad, until she was just over three months old, by which time she had smiled willingly for plenty of strangers and been calmly content in their arms. But with Grandad, it was more than willing acceptance or placid contentment; it was love. Instinctive and intuitive love. The feeling was mutual.

Over the past eight years, as so many of Hannah's physical abilities have weakened and regressed, that intuitive bond between her and her beloved Grandad has only strengthened and grown. It is now an acknowledged family truth that Hannah will be happy if Grandad is there (and, most likely, vocally displeased if he is not). She will look around corners, objects and people (even Grandma!) to see if Grandad is coming too, and will make her displeasure known if he isn't. She will move across a room faster, and be more determined about where she is going in order to get to Grandad than she will for anyone (or anything, perhaps with the exception of Pringles) else. She will break into infectious laughter, even in the midst of tantrum and misery, for no reason other than that their eyes meet. He is undoubtedly her hero.

But why is this instinctive and intuitive, and not simply about a little girl loving her Grandad? Because of this: Here is not a Grandad who has earned a child's love through endless piggy backs, games of hide and seek, the building of dolls' houses, buying of ice-creams or flying of kites. Hannah's Grandad hasn't done any of those things with her, ever, because he can't. He is disabled too. Twenty-seven years ago, in the summer before I started secondary school, my Dad had a stroke which left him without feeling or any movement in his left arm and with limited use of his left leg. In my daughter's lifetime, he has never once been able to sit with her on the floor and build a tower, tunnel with her through a sandpit or even bounce her up and down on his knee. But oh, how she loves him. Completely, unconditionally, instinctively. The feeling is mutual.

Sometimes I wonder if this is because they "get" each other: Does the grown-up man who can remember 43 years' worth of cricket, tennis, skiing and traveling somehow understand the 8-year-old girl who can remember two years' worth of babbling, crawling, tumbling, learning? Do they somehow share an experience of being different, of not always being able to join in, of being often on the side-lines, which gives them membership of a rather exclusive club where only they can understand the jokes? When all the two of them need do is exchange a glance to both fold into fits of laughter, it certainly often seems that way!

My Dad once told me that he still often dreams of skiing and that, rather than find these dreams sad, he finds them wonderful and exhilarating -- an experience once had and relived. I have often wondered what Hannah dreams of -- can she dream of experiences she has never had, and if she does, do they make her happy or sad? I wonder, could my Dad and my daughter's connection be a bit like this: the shared understanding of things had and lost, of dreams not quite tangible, but nevertheless exciting, of happiness and contentment on a level which the rest of us can't seem to understand? I hope so. It is a strangely comforting idea and undoubtedly a beautiful thing to watch.

Today, my wonderful Dad, Hannah's hilarious Grandad, turns 80. As part of his present, we made him a movie, consisting of all the photos we could find of him with his grandchildren over the past eight years. There are beautiful photos of him with all of our children, unquestionably, but the Hannah-Grandad moments inevitably dominate. While getting a photo of Hannah smiling and still is generally a challenge, it is virtually impossible not to take several photos of her and Grandad either gazing adoringly at each other or mid-giggle at one of their secret jokes. As I watch the film myself, it is difficult not to be desperately emotional about the bond between them and the unique place he holds in her life.

I have no way of knowing how Hannah's relationship with her Grandad might have been had she not turned out to have Rett Syndrome, but I do know that when it comes to my Dad and my daughter, those things which may appear, to the outsider, to be weak or missing, count for nothing. They don't need dolls' houses or piggy backs or kites to be everything a Grandad and his granddaughter should be. Hannah makes her almost-80-year-old grandad a child again, he makes her light up, they make each other laugh and sparkle. Hannah's words might fail her, but her laughing eyes and her mischievous giggle in the presence of those she truly, instinctively loves, say it all, and there is no one who makes those eyes laugh or that giggle resound quite like Grandad does. 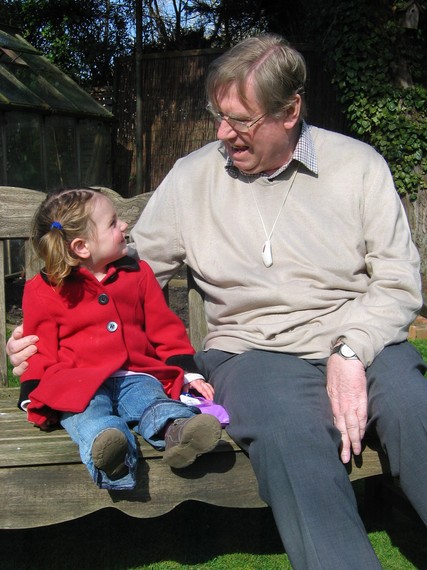 More:
Connectsmilesyndromebondconnection
Newsletter Sign Up
Raise the kind of person you'd like to know
Subscribe to our parenting newsletter.
Successfully Subscribed!
Realness delivered to your inbox