In the fall of 1947, Indiana University President Herman B. Wells left the cozy confines of Bloomington, Indiana, for Berlin, a city devastated by the destruction of World War II.

Many of Germany's greatest universities had been badly damaged or destroyed, physically and intellectually, during the catastrophic conflict, and Wells had been asked by the American government to contribute to the rebuilding process. Back home in Indiana not everyone was thrilled by the prospect of the president of the state's flagship university taking on a mission halfway across the globe, especially with IU suddenly struggling to meet the sprouting demands of student veterans rushing to take advantage of the recently enacted GI Bill. After some negotiation among U.S. government officials, the Indiana governor and IU trustees, Wells was permitted a six-month leave. He used that time to assess the parlous condition of higher education in Germany and begin working on ways to rebuild the country's university system, once one of the greatest in the world.

Wells consulted and travelled widely in Germany and provided vital advice on how to rebuild and restructure higher education. But he also saw first-hand in Berlin the Iron Curtain begin to descend. Through meetings with student demonstrators, scholars and journalists, Wells became a champion for the establishment in late 1948 of the Freie Universität Berlin, or "Free University of Berlin," a beacon of free and independent teaching and learning within Cold War Berlin and now one of Germany's and the world's finest educational institutions.

Wells' involvement in the creation of the Freie Universität marked a key moment in IU's growth as a truly international university engaged with the world through research, scholarship and education of the next generation of global citizens. Shortly after its founding, Freie Universität and IU began an exchange of students that continues to this day and is IU's longest-running graduate exchange program. Since that time, IU has also led institution building in widely differing circumstances in Europe, Asia, Africa and elsewhere around the globe.

IU was back in Berlin at the start of November to renew our partnership with Freie Universität, open a new central hub for the university's many educational activities in Europe and carry on the legacy of Wells, a true evangelist for greater globalization in higher education. That legacy is reflected in IU's continuing efforts to build on a 100-year history of engagement in international activity and scholarship.

The world has not seemed this perilous for 70 years. We have never had greater need for individuals with global cultural understanding and experience and the ability to work productively with people from different cultures and traditions.

In response to an increasingly complex, interconnected and interdependent society, internationally focused universities are actively reshaping how we educate students to be responsible and engaged "global citizens."

At IU, redefining and redeveloping our international curriculum has led to a renewed emphasis on enhancing our numerous area studies programs, which give students the knowledge they need to better understand and appreciate other countries and cultures; and marshaling the talents of our scholarly community toward solving the greatest challenges facing the world, such as climate change, nuclear proliferation and global health pandemics. It has also led to a concerted effort to substantially increase the number of IU students who serve and study abroad, thus providing future leaders in our country in business, government and education who are globally literate and ready to make a positive impact in the world.

Indeed, we believe it is our responsibility as a leading U.S. university to expand our students' horizons, foster responsible global citizenship and address the world's most difficult challenges, and we pursue this mission with the support of a strong and loyal international alumni base, a network of established friends and partner institutions, and a commitment to strengthening our connections in key regions of the world.

We continue to focus our international engagement efforts on countries where we have large numbers of alumni, where large numbers of IU students study abroad, from where IU receives most of its international students and where we have numerous successful academic partnerships with outstanding foreign universities. We now have active chapters of the IU Alumni Association in all of these countries.

A key way we are facilitating and supporting all of these efforts at IU is by establishing international gateway offices. We opened the first of these last year in in China and India; fittingly, Berlin will serve as our European Gateway Office and we plan to open three or four more in other parts of the world by 2020, our bicentennial year. 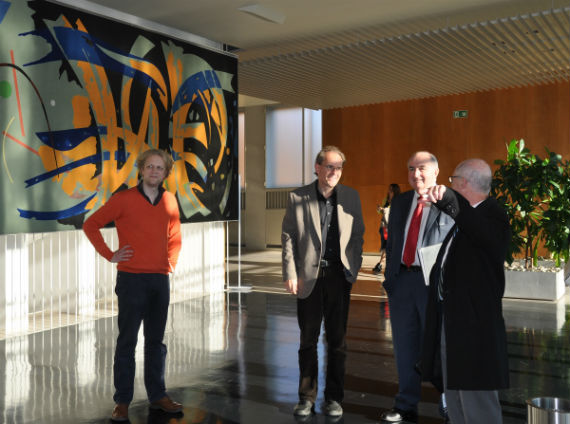 These facilities are not global, degree-granting "campuses" like those some U.S. universities have struggled, not always successfully, to set up. Rather, they serve as IU's front door in economically and culturally dynamic parts of the world. To this end, they provide central places for IU faculty, students and alumni to meet and work, and venues for international conferences, symposia, workshops and other educational events.

Herman Wells once explained that he wanted to bring "the world to Indiana and Indiana to the world." He believed that the best university education instills an understanding of the world outside of the boundaries of the U.S.: of the history, cultures, religions, politics, economies, institutions, languages, art and literature of other countries. Such an understanding has never been more critical to humanity and to building a respectful, responsible and engaged global community.