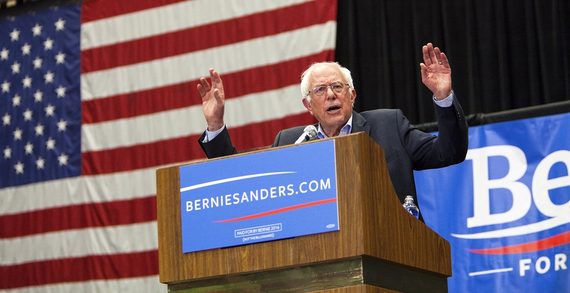 While watching the Democratic Debate on Monday Night (the last before the Iowa caucuses), I was struck by how important Bernie Sanders and Hillary Clinton are to each other. They make each other better candidates -- her more relatable, him more polished -- and no matter how long this fight goes, or who wins, both Bernie and Hillary will come out stronger on the other side.

I was thinking about this in context of my debut novel, Oil and Marble, due out on March 1, 2016. It's art historical fiction about the real-life rivalry between Leonardo da Vinci and Michelangelo.

The Clinton v. Sanders contest will end with one of them as the Democratic nominee and, possibly, the president.

The Leonardo v. Michelangelo battle produced two of the most iconic art works in all of history: the Mona Lisa and David.

That's right. Those two works of art were created in the same city of Florence, at the same time by two rival artists. The young Michelangelo pushed the aging Leonardo to create his most beloved painting, just as the master Leonardo drove the ambitious Michelangelo to reach for greatness.

For much of my life, I have avoided head-to-head competition. I don't like conflict; I prefer to be an agent of harmony. Besides, my quiet, introverted self tends to lose any fight with a more outspoken opponent.

But studying this great Renaissance rivalry -- and watching Bernie and Hillary debate -- has taught me that none of us should shy away from our rivals. We should embrace them in our politics, careers, and lives. Great rivalries beget greatness. Seemingly invincible opponents push us all to greater heights than we could ever reach on our own.

So the next time you are faced with a fierce rival, learn from Michelangelo, Leonardo, Hillary and Bernie -- turn your rival into your advantage. Here's how:

Step into the fight, not out of it. Even though you might want to, you can't run from the fight. When Hillary looked like an invincible candidate, did Bernie Sanders walk away and say, "Eh, I guess she has this thing won"? No. He got into the race and is now giving her a run for her money. And when Michelangelo arrived back in Florence to find the older, more famous Leonardo already dominating the artistic landscape, did the young artist turn and flee? No. He jumped into the fray and fought to win the commission to carve the Duccio Stone, the piece of marble that would eventually become the David.

Let the pressure fuel you. There's nothing like a little healthy competition to make you work harder and stretch to the top of your abilities. When the young, ambitious Michelangelo showed up in Florence, the Master Leonardo had to work harder to prove his artistic value, just as Hillary and her team has had to work harder -- and smarter -- to make maintain strength in the face of Bernie's surging campaign.

Learn from what they do right. When you're up against a great rival, they will no doubt do some things better than you. Pay attention to what they do right and copy it. By watching Bernie's ability to connect with people, Hillary has become more relatable, and by copying the works of Leonardo, Michelangelo honed his skills to became a better, more innovative artist.

Use the comparison to highlight your strengths. In comparison to your opponent, some of your strengths will shine even brighter. Use that contrast to your advantage. Leonardo charm seemed even more magnetic when compared to the rough manners of Michelangelo, but Michelangelo seemed more passionate and alive. Hillary seems more poised next to Bernie's disheveled hair, but he seems more relaxed and approachable next to her tailored suits.

Capitalize on their mistakes. When your rival stumbles, it's time to make your move. But not by kicking them (they're already down; there's no need). Instead, it's time to do something brilliant on your own. During Monday night's debate, when Hillary incorrectly accused Bernie of wanting to dismantle the Affordable Health Care Act and the Dodd-Frank Act, Bernie didn't get mired down in a "he-said, she-said" argument. Instead, he focused on his winning points; the result was a win. Likewise, when Leonardo took the job as Chief Military Engineer for Cesare Borgia's army (a traitorous mistake in the eyes of many Florentines), Michelangelo used his absence to solidify his place as Florence's most beloved artist.

Never give up. Having a winning rival might make you want to give up. It's easy to think, They have this won. I might as well walk away. But remember, if you do quit, your opponent -- that awful jerk who has been making you mad and pushing your buttons -- will win. Don't let the bad guy win. Neither Hillary nor Bernie are giving up anytime soon, and neither Michelangelo nor Leonardo walked away either. They were both working, creating art, and expecting to be revered as the greatest living artist until they were dead and gone.

Hillary, Bernie, Michelangelo, Leonardo... they didn't run away from their rivals. They faced off against them and grew into better candidates and artists because of it. Don't ever run away from a rival. Face them down. Grow. Become better. Don't avoid great rivals for fear of how they may destroy you; embrace them for how they can help you.