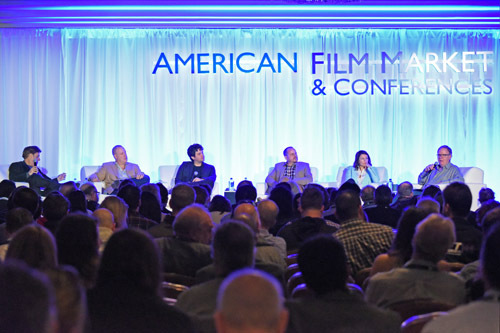 The increasing dependence on foreign pre-sales as part of a film's financing package was the focus of a conference panel at this year's American Film Market in Santa Monica.

Producers rely on the estimates of a film's value in the marketplace they get from sales agents in order to determine a project's budget. They also turn to the agents to get guarantees from buyers they can take to banks that will lend them the money to make their movies or television shows. But the insistence that these films have at least one known actor or director and be in a genre such as horror or action tends to make it more difficult to create anything else.

"You have to understand the buyer," said Tom Berry, founder of Reel One Entertainment. Pre-sales are a must for his company that develops, finances, produces and distributes television films and series for the global marketplace.

Berry uses pre-sales either to take to a bank as a guarantee for a loan or he sells them in order to raise equity for financing. He can usually obtain half of his budget from pre-sales. He adds in tax credits from different countries where the films are shot and finished (post production) with outright subsidies that different States and countries offer. The rest comes from a sale to a US distributor. It's a formula that works.

Berry says the United States is the most lucrative market because there are so many people here and outlets competing for content. Germany is next, followed by Spain, the UK and France.

Because of Reel One's size and the number of films and TV episodes they produce every year they're able to offer output deals to buyers. This is something most independent producers can't do.

"A broadcaster with 1,000 hours to fill needs rolling volume," said Berry. "Have to begin the process knowing about it."

Being able to offer enough programming to fill up a sizable chunk in that schedule solves a broadcaster's problem. There are pitfalls. Especially if a broadcaster isn't able to pay when a show or series is delivered. "You have to make sure it (the broadcaster) is bankable," cautioned Berry.

The other big hurdle for producers who are in the business of creating programming in bulk is to find ways to fund that programming with domestic sales at first.

"Many broadcasters will buy it when you get 50 episodes," said Berry. The challenge is to keep it going with the US sales until you have enough episodes on the shelf for foreign sales.

That doesn't mean there aren't opportunities out there for producing one-offs. Berry advised independent producers to approach some of the smaller cable channels.

"Look at cable channels in the 15th to 40th place," he said. He suggested Ion, Lifetime, Hallmark and UPTV as places to start. For the long term, he sees growing opportunities in Africa, Asia and Portugal.

Some countries like France don't buy American series for their prime time slots but they do for afternoon.

"Indies should plan to be a major player in the afternoon and on second level outlets on prime time," said Berry.

What's important for Indies is to own your rights. Then you can start exploring the programming opportunities that exist all over the world.

Others on the panel emphasized the importance of realistic budgeting at the outset. "I want to know the value of a film overseas," said Eric Brenner, President, ETA Films.

Brenner produces a range of films every year from dramas to action. All of which rely on foreign pre-sales.

He's built up relationships with foreign sales agents over the years that he can trust. "You need to know which sales agents are going to give you real numbers and not wishful thinking when they evaluate your film," he said.

Based on their estimates you can decide if you can afford that actor you want or the number of days your director wants to shoot and if you'll have to take a lower producer's fee.

What this means is that often, "you have to figure out how to do the impossible," said Brenner.