After a screening of the live action short film Menschen, Sarah Lotfi was approached by a young woman who exclaimed, "That's me!"

The young woman with Down syndrome referred to her resemblance to the costar of the film, Connor Long. Seeing someone who looked a little bit like herself on the movie screen was an exciting and moving moment for her, and an enlightening moment for Lotfi. "It moved me as a filmmaker," said the director.

It does mean something. Witnessing people who look like us and those we love in the media and culture impact our daily lives with confidence and hope. 24 years ago when I told friends and family that my son was born with Down syndrome, I was comforted by the phrase, "Like Corky, from Life Goes On." Chris Burke was our lone star for many years, but not anymore. In these last 24 years there have been many changes in community, education and workplace inclusion. Now actors, actresses, and models with Down syndrome are beginning to blossom throughout the media. Young Natty has been "changing the face of back to school advertising" and Down Syndrome in the Arts and Media shows a variety of actors you may recognize from TV shows like Glee and American Horror Story.

For the same reasons that Lydia Callis recently explained in the importance of "Superheroes Who Are Deaf and the Power of Diversity", having characters that share personal attributes helped "raise the aspirations of deaf young people." This same concept holds true for people of varied abilities. But, the benefits of diversity in the media run deeper than meeting the needs of one niche group.

It's not just about seeing ourselves, but about opening up to the human connection, to aligning momentarily with those who may look, learn or experience life differently. Matthew Lynch wrote, "The best way to combat this tendency (of aversion to unknown/unlike people) is to provide students with ample evidence that people that don't look like them are, at the core, people just like them." His article is about cultural diversity, but the same values can be seen and taught about diverse abilities as well.

It is exciting to see a few examples of people with Down syndrome making it to the "Big Screen."

I'm anxiously anticipating the 2015 release of Produce. The trailer already shows the way this movie's costar David DeSanctis, will introduce "the masses" to lessons our modern world is still learning including what inclusion means and can mean. Seeing DeSanctis gives us hope, like the tagline promises.

The modern story of Produce is a sharp contrast to the historical story of Menschen. Menschen takes us back to WWII and reminds us about the Nazi's T-4 project, a time and place where people with disabilities were taken into killing centers because they were "life unworthy of life."

In the film, an Austrian soldier chooses to protect a young man with Down syndrome as they trek towards the Americans at the war's end. Connor Long, the actor with DS, earned 'Best Actor' for his performance in Menschen from Filmstock Film Festival in 2013. In this film, the characters met are shown to be, at the core, people "just like us," as Lynch suggests we teach. Yet these people are not all what we expect, from "good guys," or from "bad guys." The film, in its utter honesty, is moving, horrifying, and hopeful, as "life worthy of life," must be.

For as long as stories have been told, it is empowering to see and hear someone like yourself. For the sake of all of human connections, I hope we further embrace and watch more stories like these of those who look, learn, think, and just plain are, like someone else, as well.

This image is Connor Long and some of the cast of the short film Menschen. 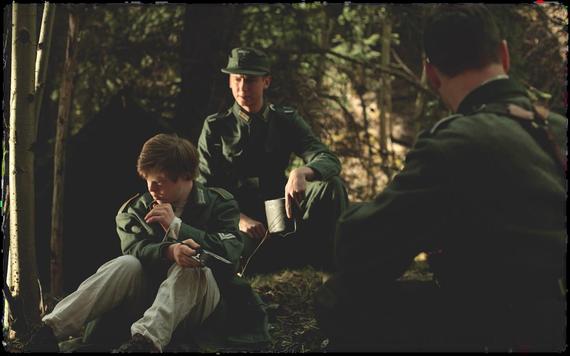