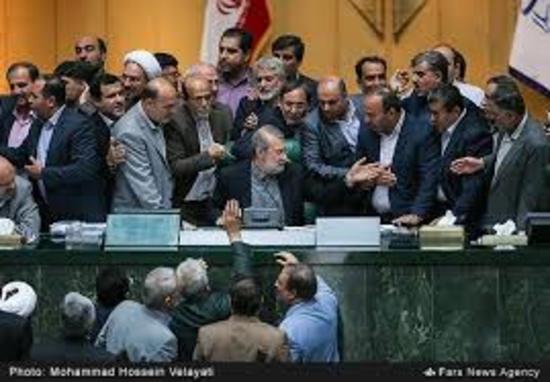 The United States is a democratic state, and Iran is governed by a political dictatorship. But, this general observation is subject to some exceptions. On the one hand, the American political system is gradually being transformed into an oligarchy. On the other hand, Iran's dictatorship is unlike those in, for example, Saudi Arabia that has had limited elections for city councils for only a few years, and its woman citizens are not even allowed to drive.

Nationwide elections are held regularly in Iran for the President, the Majles [parliament], the Assembly of Experts [a Constitutional body that appoints the Supreme leader and can theoretically fire him], and city councils. Unlike in such dictatorships as Saudi Arabia in which no dissident voice is heard, there has always been a power struggle in Iran ever since the Islamic Republic's inception in 1979. The deep struggle within the ruling elite is over the scarce resources of wealth, power, and social standing and respect. In a separate recent article I explained why the upcoming elections for the Assembly of Experts on February 26 are highly important. In the present article I would like to discuss the elections for the Majles, to be also held on February 26, and its relation with the United States. There are at several reasons why the Majles elections are also very important.

Two. A large number but 12,123 candidates have registered to run in its elections; that is, 42 candidates for each Majles seat.

Three. Twelve percent of the candidates are women, a 4 percent increase over the elections of four years ago. Some of the political and social groups have declared that half of the elected Majles deputies should be women, but the conservatives are strongly opposed to it. In major cities people usually vote to lists of candidates presented by various groups, implying that in such cities the lists of the reformists and moderates should be equally divided between male and female candidates.

Five. Vetting the candidates by the Guardian Council, a Constitutional body that has the authority to disqualify candidates from running, has always been the most important issue in the run-up to the elections. Six clerics of the Council are appointed by Ayatollah Ali Khamenei, Iran's Supreme Leader, and they are all extreme conservatives. The clerics claim that the candidates must demonstrate that they are qualified to run. To reduce chaos and arguments, the Majles passed a law according to which the Council must ask four governmental organs - the ministry of intelligence, the office of the nation's chief prosecutor, the national organization for civil registration [operating as part of the ministry of interior], and the police - about the candidates and their background. Despite this, the Council has its own national organization with offices in every city and town and, in addition to the four aforementioned organizations it uses its own local staff to investigate the candidates.

Six. The clerics play extensive roles in Iran's national affairs. Despite this, the number of clerics elected to the Majles has been decreasing significantly. 164 clerics were elected to the first Majles right after the Revolution, but the number in the current 9th Majles is only 27. The clerics have been forced to compete with non-clerical candidates, and the fact that their numbers in the Majles have been decreasing indicates that the majority of the Iranian people have changed their views regarding the clerics.

Seven. Two important pillars of any elections are people participation and competition between the candidates. The latter is linked to the number of candidates representing different views and positions regarding important issues. In the U.S. elections the competition has always been mainly between Democrats and Republicans, and the rate of people's voting has been decreasing. 48.4 percent of the American people voted in the Congressional elections of 1966; only 36.3 percent voted in 2014.

According to the official statistics by Iran's ministry of interior, the rates of people's voting in the 9 Majles elections since the 1979 Revolution have been, respectively, 52, 64.4, 59.7, 58, 71.1, 67, 51.15, 51, and 64.2 percent. The last elections for the Majles were very important because they were held 2 years after the disputed presidential elections of 2009 in which 85 percent of the people voted, and the hardliners cracked down harshly on the Green Movement. The opposition boycotted the elections, but the Iranian regime was trying to show that a high percentage of the people still voted. The hardliners could achieve high rate of voting by limiting the number of eligible voters, and by increasing the number of voting stations.

The elections were held on 21 February 2012. Then minister of interior Mostafa Mohammad Najjar declared on February 22 that, "So far, 26,472,760 votes have been counted." He emphasized that it was not the final tally, and that vote counting was continuing. He estimated that 64.2 percent of the eligible voters had voted. In its final report, the ministry of interior stated that 29.5 million people had voted, but that 29 million votes had been counted (the rest were not considered null for various reasons).

On 21 March 2011, Khamenei repeated Najjar's lie and claimed that 64.2 percent of the eligible voters had voted in those Majles elections, adding,

"That over 64 percent of the people voted is highly important. The average percentage of the eligible voters casting their votes in the U.S. congressional elections is 35 percent. Over the past decade the average rate of electoral participation in the United States has never reached 40 percent."

Eight. Undoubtedly, a larger number of candidates will be declared unqualified by the Guardian Council. If 3,500 candidates are allowed to run, it would represent 12 candidates for each seat. But, will the conservatives have enough candidates to make the elections completely competitive?

On December 31, Ayatollah Ali Movahedi-Kermani, a Tehran Friday prayer Imam and a member of the Assembly of experts said,

Sayyed Reza Taghavi, a Khamenei appointee who is the head of the national council that runs the Friday prayers has been highly active and has organized the prayers' Imams against the Reformists and moderates. The goal of the IRGC and the conservative clerics is to have a Majles totally obedient to Khamenei and his "imperial court."

Ten. Since the nuclear agreement between Iran and P5+1 was signed last July, Saudi Arabia, Israel, and their lobbies in the U.S., as well as the Republicans have tried to create a situation whereby Congress can take advantage of many opportunities to prevent lifting of the U.S. economic sanctions against Iran, and to do this they use such excuses as Iran's tests of its missiles, its alleged support of terrorism, and violation of human rights. Proposing new sanctions against Iran is another way of preventing the nuclear agreement from implementation.

After the 9/11 terrorist attacks, the George W. Bush administration was not sure which countries it should attack. It was basically flipping a coin to decide whether Iran or Iraq must be attacked. Dick Cheney flipped the coin, and poor Iraq became the target of invasion. If the Republicans win next year's presidential elections, they may try to cancel the nuclear agreement with Iran, and will not even flip the coin to decide whether the U.S. should attack Iran. The situation will not be much better if Hillary Clinton is elected President. She supported invasion of Iraq; played a key role in the attacks on Libya, and threatened to obliterate Iran in 2008. In a meeting with senior officials of the Obama administration in 2010,Clinton suggested the U.S. give the green light to Israel to attack Iran. And, in a recent speech at Brookings Institution, she made many wrong statements about Iran in order to develop a new road map for attacking it. As Stephen Walt put it, "What a diplomat she is."

Regarding Iran, the U.S. has always had double standards. At least 15 Saudi citizens took part in the 9/11 terrorist attacks on the U.S. The Saudi official ideology is Wahhabism and Salafism, which are also the ideological backbone of Daesh (also known as the ISIS and ISIL). Saudi Arabia has supported Daesh and many other terrorist groups, has been bombing Yemen for 10 months, committing war crimes there, and on January 2 beheaded 47 people.( 1 , 2 , 3 ). Yet, Saudi Arabia is a strategic ally of the United States. Similarly, Turkey has been supporting Daesh; murdered 3100 of its Kurdish citizens during 2015, and its President, RecepTayyib Erdogan expressed his liking for Hitler's kind of power in Germany. His government has also sentenced the editor-in-chief of theHurriyet, one of Turkey's most important newspapers, to 5 years of imprisonment, yet Turkey too is an ally of the United States. But, it is Iran that the U.S. calls States the most important supporter of terrorism, and violator of human rights. The U.S. also helped and rewarded Saudi Arabia to become the head of human right council of the United Nations. Is the U.S. really aware of the effect of its double standards on the Iranian people?

Eleven. To escape war and Sanctions, Iran has no way other than becoming a democratic state and improving the state of human rights. If the Guardian Council rejects a large number of candidates for the Majles elections, the next Majles will be a conservative and anti-U.S. one, and that will create the right environment for Congress and the next U.S. president for taking action against Iran. Instead of rejecting the election candidates by accusing them of being agents of the U.S., Britain, and Israel, the Islamic Republic must release all the political prisoners. Iran needs a Majles that can establish contacts with U.S. Congress.