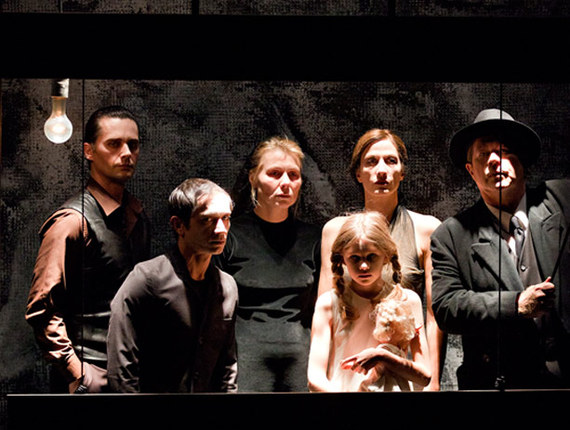 A few years ago, I was sitting at the Brooklyn Academy of Music smiling through a production of Eugène Ionesco's Rhinoceros directed by Emmanuel Demarcy-Mota. The piece was sharply witty and beautifully rendered, and it has remained one of my favorite productions of recent years. Therefore it is even more of a pleasure for me to introduce you to the words of that same director, back now to share his production of Luigi Pirandello's Six Characters in Search of an Author (in a version translated and adapted by François Regnault) at BAM's Harvey Theater. I asked the impressive director of Théâtre de la Ville in Paris some questions about his approach to this production and theatre in general and his answers will hopefully inspire you as much as they have me. As Emmanuel's answers were given in French, I owe a great deal to my talented translator Pamela Kierejczyk Thielman for bringing his poetic words into English for us all.

Bess Rowen: Your background is very impressive, and I see you've been working on Pirandello since the early part of your career. What keeps drawing you to him? What is it about his work that speaks to you?

Emmanuel Demarcy-Mota: He is an author who has fascinated me from a very young age, and who continues to do so because of the multiplicity of paths that one can take to reach the heart of his work: Six Characters in Search of an Author, for example, is a magnificent homage to the theatrical art that at the same time reveals, dissects, exposes--sometimes cruelly--the limits of this art in the face of the real. It challenges in a very concrete manner the "impossibility of theatre," which resides in the profound contradiction between reality and fiction, between imagination and objective reality. It even proposes a dramaturgy for this confrontation. Moreover this is also, for me, the play that brought European theatre into the modern era: it begins without scenery, during rehearsals, it seems to mock the fourth wall, sends the classic "bourgeois" aesthetic packing...and it provokes an enormous scandal, which would result in violent brawls during its premier in Rome in 1921. To direct Six Characters in Search of an Author, to work on a writer like Pirandello, is also to enter into an other theatre. A theatre that, paradoxically, intervenes in the story to bring into being a truth: a little like Shakespeare, or Büchner, or even Peter Weiss, whose Marat-Sade I directed: it is necessary, in the theatre, to reveal the truth, to unveil lies, to denounce subterfuge, moral, political, aesthetic lapses....This is an idea that I like very much, a theme that recurs--and sometimes I only realize it after the fact--very often in my work. And if I push further, this theme of truth, so present in Pirandello, can, in the work that I do with the actors, penetrate all of the phases of our process: when is an actor "truthful?" When is he "artificial?" And the director, at what point is his artistic method sincere?...all of that returns us to another play of Pirandello's that I like very much: So It Is (If You Think So).

BR: Likewise, I see that you've done several productions of Six Characters in Search of an Author. Why this play? And, similarly, why this play now?

EDM: Since my adolescence it always intrigued and astonished me. So when I was about 20 years old I worked on it for the first time, in school, with the first theatre group that I founded, and together in the courtyard of that Parisian school, we put up the first version. It was only a few years later, and at that point our company was performing in theatres in Paris and the suburbs, that I decided to work again, this time in a "professional" context, on Six Characters in Search of an Author. I had just directed Shakespeare's Love's Labor's Lost, for which I had brought together a troupe of young actors with whom I wanted to continue to work, and I wanted to bring in two actors: Hugues Quester and Alain Libolt, who I knew from their work with Patrice Chéreau. The play offered that possibility, of working on a production for a large stage, putting to the test our theatrical language, and of bringing together a troupe that integrated two more experienced actors into our group of young people. And today, thirteen years later, I wanted to go back, in a way, for the third time, to this foundational work; and somehow our challenge is to make a sort of return to origins, perhaps also to put to the test the young people that we were at that time, to see if we can rediscover that energy, that kind of "savage emotionality" that we brought to the production and its creation. Some of the actors who were 25 then are forty today, others were 58 and today they are 70, many had no children and now have several. So life has gone on, and it is necessary for us to reconnect with the energy that nourished the production in 2001, while finding the deep inner need for it today.

BR: Plays about theatre are some of my favorite things to watch on stage, but they provide all sorts of interesting challenges for the production process. How did you go about rehearsing? Did you spend a good deal of time discussing intellectual aspects of the play, or did you work from a more intuitive place?

EDM: I have a method of working that is very intuitive with the body, the movements, the balance of space, the decorative elements that constitute the world that we invent on the stage. Very intuitive in the first phase, which brings about a precise construction, an architecture of space and movements that is very shaped. In order for these first intuitions to come, I must explore the text beforehand, dissect the play and its structure so that it is somehow "infused" in me, I devote a rather long time to the preparation of the production, then we move on, with the whole artistic team, to a table reading of the play. Once we have gone through this step we go up on to the stage, and then I am more than ready to observe the actors, to guide them...in a way that is pretty spontaneous, I think, or animal...You were saying "theatre in the theatre," I think that what interests me above all in the play is the connection between the terrible tragedy of the characters and the artistic necessity to represent it, the attempt to render its violence, or to soften it, with the weapons of the art form.
The theatricality of seeing, the staging of the creative process, the initial absence of décor and then its almost spontaneous appearance, the impossibility of the actor becoming the character without passing through interpretation...all of this interests me primarily because at the end of the road, what Pirandello asks is for us to represent a powerful drama, worthy of classical tragedy, where there is mingled incest, suicide, the sacrificial death of a child...Without the power of that tragedy, the questions of "theatre in the theatre" for me, today, are just decorum.

BR: What's your favorite line (or moment) in this play, and why?

EDM: The dramatic construction of the play, the way that the tragedy of the characters is unveiled clue by clue, and the suspense that comes out of that, makes it difficult to extract one "cog" that makes up the clockwork, with its mechanical precision, its diabolical dramaturgy. But if I must give you an answer, there is a moment that condenses what I like most in the play: the passage that offers both fear and laughter, profundity and fantasy...the way that it blows hot and cold all the time. Precisely like this is the moment when the little girl drowns: we see her fall into the pool, seeing it as spectators, just as all of the actors and characters are brought together on the set at her drowning. The rest of the stage is petrified with emotion, the little girl is dead and the director says, softly but with enthusiasm, "Very good! Excellent!" He only sees it from the point of view of a work to finish, and we laugh three seconds after being moved to tears.

BR: I was fortunate enough to see your production of Rhinoceros when it came to BAM in 2012, which was excellent. This caliber of production, as well as your many educational programs at Théâtre de la Ville, makes me want to ask you a sort of daunting question: what is it about theatre that excites you? Why is it important? I don't mean to be reductive, I know that this is an impossible question to answer, but your commitment to theatre makes me think you'll have something fascinating to say!

EDM: There are obviously many ways to approach your question. Personally, I have always been emotionally attached to theatre, from my childhood, for its capacity to bring together individuals around a work: the collective that is formed with the team that accompanies me for several years, some even from school; and then the community that we form with the public. Human beings in front of other human beings. The thing that constitutes a major difference from film. The sharing and, therefore, the exchange. And finally, the capacity that art has, the theatre in particular, to influence individuals, to develop the imagination, the sensibility...because you spoke about the program for children and youth, it is very important that we conduct them at the Théâtre de la Ville, I personally experienced how essential it is, from a young age, to be in contact with art, even more so an art that is practiced together in a group, like the theatre. I have seen, concretely, how this can influence our way of understanding each other, of perceiving the environment, and of assessing the world around us. And if I take even another step back I think that a theatre, I'm talking now about the building, also has a mission to accomplish in the area, the city in which it is built, to meet the population, to overflow its walls, to offer beauty, reflection, wonder, invention, audacity, even enthusiasm-which doesn't hurt these days...I do not know if art can change the world, but I see many ways it can influence individuals.

BR: Is there anything in particular you want to tell people before they see this show?

EDM: The American tour of Six Characters is taking place two years after that of Rhinoceros. We discovered at that time an exciting interpretation of the production by the American public, a different one from that of Paris, Lisbon, Moscow, Santiago in Chile...I hope to find once again that energy, I hope for "reunions." I am very curious to see the reactions of the American (or New York) public to this work, and beyond the production, to the play by Pirandello. Such a European piece that, we hope, is universal, that comes from France, and interrogates the actor, the art of acting, in a country which has been able to launch this art into modernity. I look forward to this encounter with enthusiasm.

Six Characters in Search of an Author will be playing at BAM's Harvey Theater from October 29th through November 1st at 7:30pm and November 2nd at 3pm. It will be performed in French with English titles, so don't worry if you're not a French speaker! Instead join me to watch these six characters find their director, who seems to specialize in staging pieces that make "the impossibility of theatre" the most theatrical possibility of all.