If you want a good laugh, watch this determined little dachshund make the impossible happen in this YouTube video:

He's my new hero, and when I am next battling a "shark" in my own life, I think I will remember how this little pup conquered his -- like when I run my next marathon.

I ran my very first, the L.A. Marathon, this weekend. I had only trained three months, which didn't feel like quite enough for a 51-year-old woman who hadn't run in years. I was in shape, but even when I used to jog for exercise, I had never run more than a 10K, so this was going to be a stretch. Throw in a chronic immune-system-bending disease I have and one begins to question my sanity. I missed a few weeks all-tolled of training due to this disease, so I found myself repeatedly defending my choice to my beloved inner circle.

Less than 48 hours before the race I found myself getting an emergency tune up in my acupuncturist's office in the hopes of shifting my health in time. I had no energy and couldn't even imagine running 3 miles, let alone 26. But I found myself tap into what I now know is my inner Dachshund with respect to that ominous marathon shark. I remembered that my friend's cousin had just finished chemo when she ran the New York Marathon last year. It was her "F you" to cancer.

I declared to my acupuncturist that this was my "F you" to my disease. So she and I both got to work on getting me healed. Her treatment (including the little tiny acupuncture needles that remain in your ear that Russian and Chinese Olympians use!) coupled with my inner dachshund worked to increase my energy over the next day and a half. I had a successful first marathon with no injuries and plenty of energy left to even celebrate with friends over dinner that night.

This video has one sweet moment in it when the camera operator/doggie mom clearly adjusts the position of the shark to help the tiniest bit. If you interviewed the dachshund I think he would say he didn't need her help, no matter how impossible a feat he had ahead of him. He was not going to lose.

I, though, needed the subtle adjustments of my friends and family. Were it not for them helping move that shark a tiny bit I wouldn't have made it. People I have never met on Facebook cheered me on with such love and enthusiasm. A Facebook friend's son (genius writer you will one day hear about, Tanner Walters) who was home from college for the weekend did this for me: 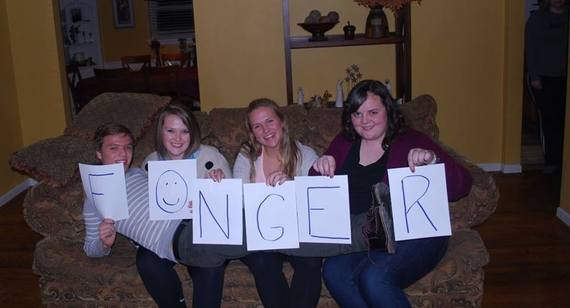 All of my friends and family filled the invisible Energizer Bunny pack on my back with their cheers, wisdom, love and support. Then the spectators on the road refilled what I was losing along the way with their hilarious and moving cheers: "Don't forget you PAID for this!" and, "The pain is temporary, finishing is forever."

And check out this stellar spectator I recognized around Mile 16. As I walked closer to him I screamed "NO WAY!" He replied "WAY!" I asked him to tell my running buddy and I that we would make it and, in fact Bob Harper of "The Biggest Loser" told us he had no doubt we would finish. As I ran on I turned around and snapped a photo of the proud papa who literally watched each and every runner as if he was their coach. 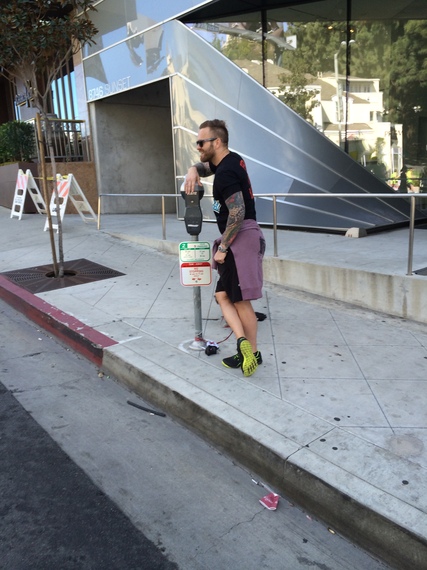 If you've got a shark you want to catch, a dream you have no idea how to attain, pick up the phone and call the person in your life that might have a clue about how to help you turn that unwieldy beast in the right direction. I would not have completed this marathon injury-free without my friends near and far, even with my inner dachshund at full throttle. But he helped, that's for sure.

Heart firmly affixed to sleeve + cape. Author of upcoming "Superhero of Love: Heal Your Broken Heart & Then Go Save the World" from Red Wheel/Weiser (2018)