April 24th, 2016: It was beautiful, sunny Sunday afternoon in Santa Fe. That day, the unique, typically bitter and awful taste of ayahuasca did not seem to be so bad going down my throat. Perhaps it was because the vegetal, or hoasca--as ayahuasca is called in the União do Vegetal (UDV), a religion originating in the Brazilian Amazon in the 1960s--was not made in the Amazon, but with Banisteriopsis vine from the UDV's new plantation in Hawaii. Or perhaps the brown liquid tasted different because I, too, was enjoying, alongside the members of the UDV, the pleasant taste of justice, freedom, and victory. It was the opening ceremony of the núcleo Santa Fe, the UDV's new temple. The solemn occasion was attended by some of the church's leaders from Brazil.

This event was the result of a long and hard journey: five and half years without being able to legally drink the vegetal in the US; seven years of fighting all the way to the Supreme Court; four years of negotiating the regulation of the administration of hoasca with the DEA (once the case had been settled); and nine years of struggling with the county of Santa Fe to build the temple.

"This represents a dream fulfilled. It's the accomplishment of Mestre Gabriel's [the humble rubber tapper who founded the UDV] vision that the UDV would reach out to other countries. The federal justice determined we had the right to drink our sacrament, but without a place for our community to gather, 'religious freedom' was just an abstract concept," Mestre Jeffrey Bronfman told me. Thanked with appreciation during the ceremony by the community, Bronfman is one of the main strategists of the case. A warrior whose personal wealth also made this religious exemption to use a schedule I "drug" possible in the United States, home of the Drug War.

I have been attending the UDV sporadically for the past 20 years. It was in their temple that I tried ayahuasca for the first time; an experience that changed my life forever. I have always been fascinated by the UDV's combination of ayahuasca with an incredible institutional organization and a conservative ethos. The UDV represented to me a kind of "flirtation with normality." I've thought of joining a few times, but never did.

On that afternoon, in the "colorful religious landscape of northern New Mexico's high desert," as put by anthropologist Michael Brown, I couldn't have been more excited. The UDV's expansion to the US was a delight to my anthropological mind. A Mestre (religious leader) told me I looked like a kid in an amusement park. 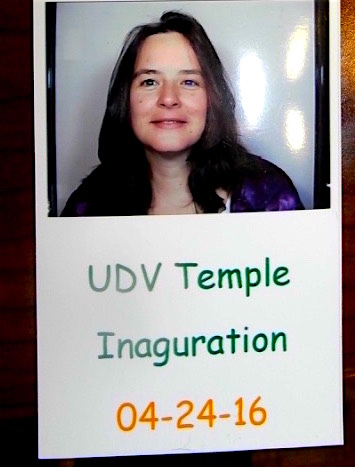 The UDV aimed to keep their caboclo (rural mestizo based) identity and style alongside the introduction of powerful technology and structure. The ceremony was held entirely in Portuguese, with teachings by the traditional Mestres da origem (contemporaries of Mestre Gabriel). North Americans heard their words through an electronic apparatus for simultaneous translation (while one ear heard the English translation, the other could hear what was being said in Portuguese!)

The simultaneous translation was done in a booth on the second floor by Renata Cassis Law, a Brazilian living in the US for 18 years and married to the local head of the church. "When I am translating, I get more focused on what the Mestre is saying. I do not let my mind wander around. I connect in the burracheira [the effects of the vegetal] and I translate. I feel there is a direct line of transmission. I really like it. It is also a pleasure to serve others," she shared, while working some extra hours after the session preparing a nice dinner that was served to everyone.

While expanding nationally and internationally, the UDV has adopted some strategic decisions: to be legal, and never underground; to be ecologically sustainable; and not to translate their teachings into other languages. No chamadas (songs) or histórias (stories that are part of the religious doctrine) are translated, though other parts of some sessions might be held in other languages. Foreigners who wish to ascend in the internal hierarchy of the group must learn Portuguese. The result is a mix, a fascinating community speaking different levels of Portuguese; a distinctive characteristic of the bourgeoning process of diaspora of the Brazilian religions to the global religious context.

Nancy Hollander, the acclaimed lawyer responsible for this victory, stated: "Today is the culmination of 17 years of work together with the UDV, and it is the birth of this house of worship. It's a good night and a good morning at the same time." Along these lines, Luis Felipe Belmonte recognized, "This represents a significant victory in the recognition of the value of the work of Mestre Gabriel and his disciples in the expansion of the UDV throughout the world." A Brazilian lawyer based in the UK, Belmonte has been working with dedication on the legalization of the UDV in Italy, Holland, Spain, the UK, Switzerland, and Australia.

After the ceremony, a video showing the construction of the temple was shown. The unanimous feeling was of happiness and joy. Underneath this was the sad recognition of the huge amounts of prejudice and misunderstanding that surround the UDV. Absurd claims from the neighbors involved baseless accusations, including that the DMT present in the brew could contaminate the groundwater and poison their children. All who have had the opportunity to be able to drink vegetal, know and share silent agreement that it keeps us in good shape, health, and discipline.

I took a photo in the photo booth and grabbed a piece of wood with the image of the temple: souvenirs from the grand opening and, to me, tokens of the UDV's amazing development. I hopped back on an airplane full of gratitude for the privilege to be able to travel to the inside of my heart and soul, visit an enchanted spiritual land, and share this experience with so many friends in the UDV.

Congratulations to the exemplary perseverance of the brotherhood. And also to my fellow researchers who have the curiosity to study ayahuasca and things like the UDV's concept of "mental concentration"--the opposite of a pathological hallucination. They risk their careers to address this taboo topic, navigating into these mysterious waters with the tools of science. All those who love justice and freedom are part of this victory.

CORRECTION: The language in this post has been updated to clarify the attendance of the opening ceremony of the núcleo Santa Fe.