Uncanny thoughts seem to tread their own geography, so that you cross paths with them again and again over time. Here's one uncanny thought I have encountered repeatedly in my life: the proposal that time continues in dreams, whether or not you are currently dreaming them. So that if you should wake from the dream, and then dream of the same story a few weeks later, you will find that a few weeks have passed in the dream as well. There is something deeply disturbing about this proposal. It suggests that your dream is not a creation internal to your mind, but carries on its own independent life, into which you glimpse during the period that you dream it.

There is a quality like this to Hayao Miyazaki's magical 2001 film Spirited Away. The young heroine, Chihiro, encounters a town which grows progressively less abandoned the longer she stays. Chimerae, monsters, spirits, and gods move into view. It is clear they have been conducting their own unseen lives, and will continue to do so once they have become invisible again. The first act of Spirited Away is wild with menace, each major character alien and threatening, driven by sinister and unknowable motives. With the flexibility of a child, however, Chihiro settles into life in this strange alter-universe. The menace of it softens. Its evils become less fearful as they become more comprehensible. Each of the terrifying characters is revealed as two-sided, capable both of virtue and cruelty, allowing Chihiro to learn to navigate among their generosities and vulnerabilities and imperfections.

Some such aspect inheres in Andrew Sendor's extremely peculiar body of work, much of which is on view in Paintings, Drawings, and a Film, open now at the Eli and Edythe Broad Art Museum at Michigan State University. His paintings, drawings, and film work offer flashes of an ongoing story. It is possible they are meant to occur in another world, much like our own, but different in important and unstated ways. On the other hand, we may fall into them, as through a previously unnoticed trap-door, emerging somewhere else on our own Earth, but so strangely different as to suggest we didn't understand how things were until now.

Sendor's world, like Miyazaki's, initially glitters with menace. Sendor paints in the lush black and white of the golden age of Hollywood, and appropriates many of its stagey elements: the lustrous textiles, the sparkling props, the not-quite-convincing interiors, and the stylized, eye-catching characters. 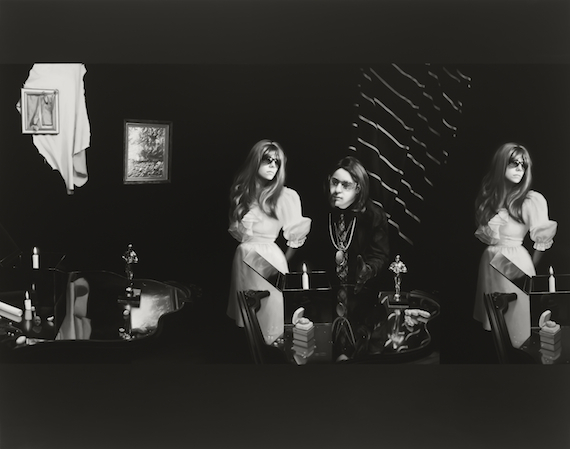 Seven scenes from the documentary "The Interior of Delicates and the Enigma of Boris Flumzy"
2015, oil on panel, 34"x43", courtesy of the artist and Sperone Westwater, New York

As we can see in Seven scenes from the documentary "The Interior of Delicates and the Enigma of Boris Flumzy," Sendor's work can appear like a disarticulated film noir, each element urgent and narrative, and yet the entirety illegible as to its history and destiny. When I first encountered this painting, it seemed to me possessed of a kind of mean hipness. It is an oil painting, but its technique is obsessively perfected. Its characters are clearly very cool, but we can never know what acts they performed, or parties they dazzled, to make them so. They appear like the ultimate in-joke: every single human being is on the outside of it. The painting is a machine for inspiring anxiety and crestfallenness.

As in Spirited Away, though, the longer you stay, the more you understand. The initial aloofness dissolves, and you are welcomed into a whispering world, numinous with alien wonder. The floating elements of narrative fall roughly into place: the male character, Boris Flumzy, is one pole of a duo, of which the other is a fleshy imp named Fenomeno. 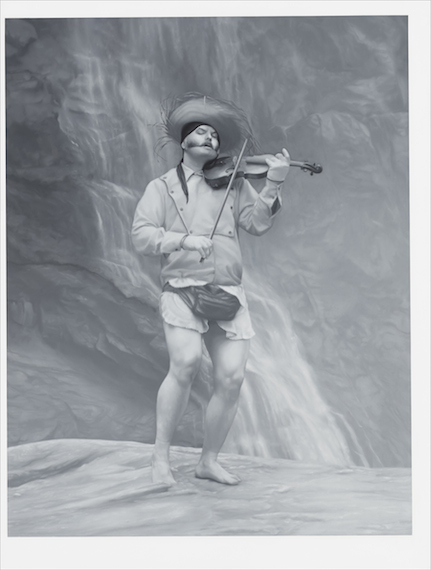 From the documentary "The Tchaikovsky Effect on Fenomeno at the Geirangerffjorden, Norway"
2014, oil on panel, 45"x34", courtesy of the artist and Sperone Westwater, New York

Flumzy and Fenomeno appear in paintings and in Sendor's short film. Each has something the other needs. They perform a series of transactions. The only one we get to see is Flumzy burning Fenomeno in effigy, while Fenomeno quakes in - in what? Agony? Grief? Metamorphosis? The nature of the transactions between Flumzy and Fenomeno constitutes a deeper layer of weirdness in Sendor's world - more than the peculiar set dressing, it is the element that makes his world so seemingly unlike our own. Each of the reciprocal actions can be interpreted as one character giving to, or taking from, the other. Each can be argued to be kind or vicious in its gestures, and a theft or a gift in its essence. Flumzy and Fenomeno are either dear friends, or mortal enemies. Their relationship and transactions are irresolvable ontological riddles.

Sendor himself plays the half-shaved Flumzy. An associate of his plays Fenomeno - acting the part in the film, modeling for the paintings and drawings. In a halo around the central mystery of their relationship, certain dynamics emerge: men with facial hair seem to represent a dionysian liberty which Sendor himself, in the real world, where he spends hundreds or thousands of hours on each meticulous painting, craves but cannot quite touch. They act boldly, and fluidly combine masculine and feminine markers in ways that the uptight Flumzy, split male and female down his vertical shave-line, cannot. 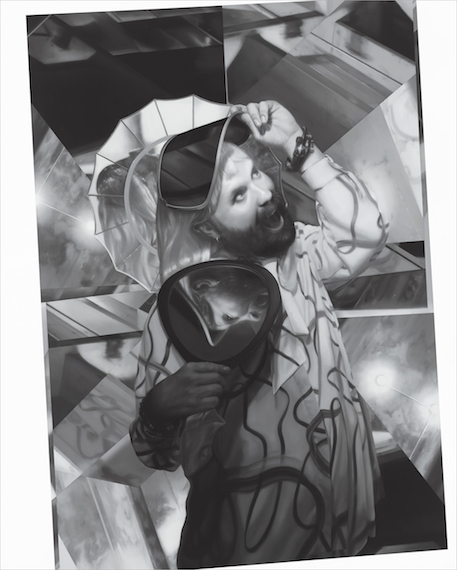 From the documentary "Nocturnes: A Music Therapy Clinic Founded by Lamar Beray"
2015, oil on panel, 30"x24", courtesy of the artist and Sperone Westwater, New York

Set somewhat apart from the odd procession of these two F's, there is a little girl who has misplaced her parents. The prematurely self-possessed Plumita Lunes Nuñes presents a poignant spectacle in a separate strand of Sendor's work. He depicts scenes from her passage across Europe, making an ancient Christian pilgrimage in the hopes of finding her mother and father. 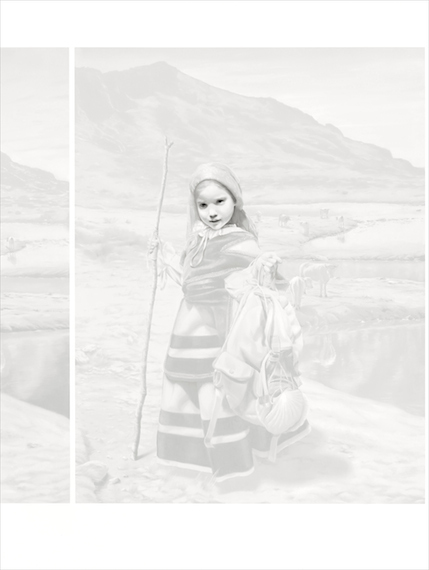 This headstrong orphan seems to bring out the gentlest of Sendor's touches. He cloaks her journey in soft whites, as if in mute grief for the disappointment she must surely face at the end of her ordeal. Perhaps it is too much to assume that she - or Flumzy or Fenomeno - represents some element of Sendor, and yet her story strikes me as the most straightforward, single-sided, and accessible. There is something to her that speaks to something simple in him; this too is touching.

An extensive analysis could be performed of the perplexing role of ironic distance in his work. There is irony not only in its content, with those elements of inside-jokeness we were discussing; there is irony in its form as well. It is made in the manner of classical painting, but it owes transparent debts to the aesthetics of cinema, photography, and photorealism, jostling it into the realm of pastiche. Most profoundly, the very perfectionism of its approach makes its inevitable imperfections all the more forceful. Everything that is in any way off - a pants crease that does not convince, a facial muscle that fails to sit quite right - interferes noisily with the illusion. The sum of such trivial errors is a lingering impression of visual weirdness, a definitional flaw so intense as to form its own expressionism. The material of this expressionism is the flaw, but the construction of the work to foreground the flaw gives it an ironic quality. It is a rare quality, because there are few painters as talented and patient as Sendor, and as willing to expose their vulnerabilities. This exposure, however, gives the irony a sincere aspect. It makes the role of irony in the work as flickeringly irresolvable as the Flumzy-Fenomeno relationship. 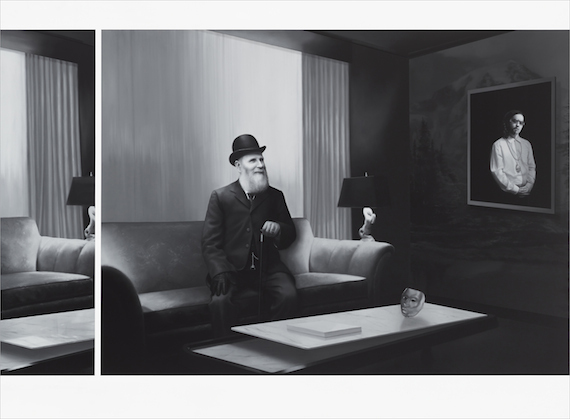 That's about as far as I can go as regards irony, because I am not a student of it, nor especially interested in it.

The fruitfulness of this line of inquiry, in addition to a purely technical inquiry, and a literary one, a cinematic one, a psychoanalytic one, a stylistic one, &c., brings us to the point that interests me most, which is the sheer ambition of Sendor's work. I happened to become acquainted with it around the same time I saw Jenny Morgan's work in person for the first time. These two artists impressed me very much with their ambitions, which are generically similar. They share an ambition to master a set of difficult tools, to execute work at a high level of technical accomplishment, and to assert and live up to a rigorous set of formal demands. Further, their ambition is to use all of this mastery to imbue the work with a dense network of meanings. Certain densities of meaning are only possible in the context of semiotic precision. In visual art, semiotic precision often depends on visual precision. Sendor and Morgan dedicated themselves to their craft in order to prepare themselves for their art. The craft is ambitious, but the art more so - the art is struggling toward the thematic density of the novel.

To specify the discussion to Sendor again - notice how much he gives up in exchange for his ambition. He paints very few paintings, because each one takes a long time to conceive and execute. He has eliminated virtually all color from his work. His work, so rich in images, actually draws upon a strictly limited image reservoir - they all have to build the story he is telling. Most limiting of all, he is more or less telling a single story. He has spent years telling this one story. He cannot have flings with other stories, as ordinary painters do, because there is not enough time to do that, and to meet his ambitions. He must spend all of his time on his one story, and even so, fail to plumb its depths. His story is larger than he is, but he has done everything possible to purify his process so that even a fraction of it will transmit clearly. This results in mysterious, jewel-like paintings. They have become like the independent dream: small apertures, but peering through them one sees the entirety of an ongoing world.

Sendor's work reminds you how much painting is capable of. 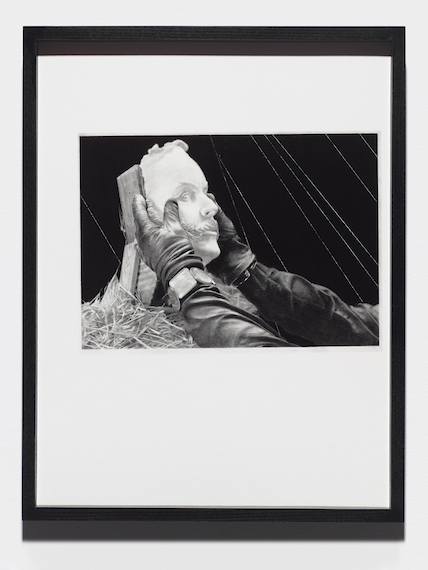