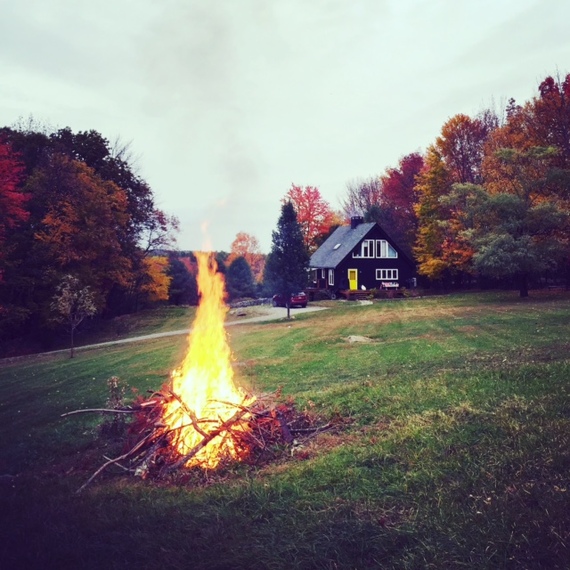 Flashback to the early 80's. I'm eleven years old, living in a non-descript Long Island suburb with a simple chore; rake and bag a half acres' worth of leaves. Nailed the raking part, the disposal, some would argue, not so much. I never was a fan of plastic bags and I have to say, a massive ten foot high pile of leaves makes for a glorious blazing spectacle. Apparently, it also freaks out the neighbors and local fire departments. You know what they say, live and learn...or just by a place in the country.

One of the joys of owning a plot of land in the Catskills is that you can build bonfires at will and to your hearts content. No one cares. Some would say its a right of passage in these parts. This particular bonfire consisted of fallen branches and leaves and parts of a few trees that I had cut down (more about that moral dilemma in a future post).

Sitting outside and watching a large burning fire feels instinctual, zen-like and, for no apparent reason, quite satisfying. The crackling of the wood, the brilliant flashes of color, the plumes of smoke dispersed by the wind, it's an all consuming experience. On this particular evening, I sat for an hour and retired inside, perfectly clear headed and at peace. Who says you have to close your eyes to meditate.

I care so you don't have to.