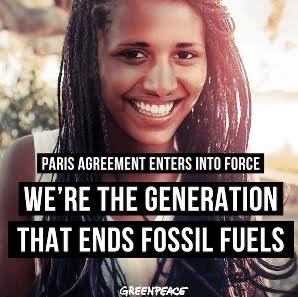 Last year, 197 countries adopted the historic Paris Agreement on climate change. Today (November 4th) it comes into force, in one of the fastest ratifications of any international agreement.

A huge global movement has driven this momentum - from enlightened city governments to global leaders to forward-thinking businesses and corporations. But a critical role has been played by ordinary people, who have applied pressure, petitioned their governments and demanded a clean, safe climate.

The Paris Agreement is historic not only because of the urgency and the speed of ratification. It is historic because of the degree of international cooperation, and its ambition to tackle the biggest crisis facing this planet in a way that is transparent and measurable.

The Agreement includes long-term goals to phase out global emissions to zero, to shift finance, to implement and strengthen national action plans which include scaling up of renewables, putting a price on carbon, regulating major sectors and building resilience to the impacts.

This radical transformation was demanded by a growing movement of hundreds of thousands of people from around the world. What happened in Paris was a consequence of this momentum and the Agreement can and must continue to accelerate the momentum and drive change.

Understanding that this transformation is inevitable is no longer the idea of a group of scientists or campaign groups like Greenpeace. People from different walks of life and from different sectors and industries are ready to work together to tip the balance even further in the right direction.

City mayors understand it. In the financial sector, Allianz, Axa, the Norwegian Wealth Fund and now BNDS all understand it, as they divest from coal.

In the US, the Securities Exchange Commission is investigating how ExxonMobil values its assets in a world of increasing climate-change regulations. Depending on the outcomes of this investigation, there may be far-reaching consequences not just for Exxon, but for the entire oil and gas industry.

In the Netherlands, the Urgenda Foundation, together with 900 citizens, filed a case against the Dutch government, winning a lawsuit in June 2015 that forced the State to take more measures against climate change.

It's not just the people using legal means to bring about transformation; it's also state governments. In the US, state governments are investigating whether fossil fuel companies - including ExxonMobil - may have violated laws pertaining to fraud and deception, by actively undermining the science of climate change, even while they have known about the dangers since as early as 1977.

But time is not on our side and the pace of the inevitable must be accelerated immediately. Although the political and economic climate is moving against fossil fuels, the impacts of decades of carbon dioxide release from the burning of fossil fuels is rapidly taking its toll on the natural climate.

Temperatures have broken records in 2016. Scientists believe that CO2 levels have now permanently passed the threshold of 400 parts per million, compared to 280 ppm in pre-industrial times, much too high to avoid dangerous impacts.

We can't negotiate with the atmosphere. To avoid even greater impacts than those we are already experiencing and to have any serious chance of staying below 1.5 degrees, we need to peak global emissions and turn them into a rapid decline towards zero right now.

The priority in our action must be in the very near future - the coming 5 to 15 years - to scale up renewable energy and energy efficiency, reduce deforestation and provide sustainable mobility options for people around the world.

Fortunately, as outlined above, people understand what is going on and are becoming more active, just like in Paris during the climate negotiations, where people showed up on the streets in large numbers and became increasingly engaged before, during and after the meeting.

They showed up not just to pressure their governments to agree to the transformation we need. They showed up in solidarity with those countries for whom climate change is not about profit and loss, it's about life and death. Those countries most at risk are the ones who have done the least to contribute to the crisis. That is why a just transition must be part of future negotiations.

Governments embraced the transformation, they agreed to accelerate it, they ratified the Paris Agreement in record time and now they have to implement it and overachieve it.

There's another part of this inevitable transformation: The clean energy revolution is already underway. Renewable energy is breaking global records while coal is entering a terminal decline. We just need to speed this up.

It's about delivering better energy for all. It is now possible for people who are currently without any reliable access to electricity, such as in India or parts of Africa, to gain energy services powered by solar, leapfrogging the carbon-fuelled industrial revolution and avoiding the negative impacts of fossil fuels.

There are those who are fighting hard to slow down this inevitable transformation, whether due to self-interest, the loss of short-term profits, or the fear of losing their tenuous grip on "power".

We need to hold the carbon majors accountable for the harm they have caused. We want to make them contribute towards the just transition to a better world; a just transition that demands temperature rise stays below 1.5 degrees.

A profound and inevitable transformation underway. Greenpeace will continue to challenge mindsets and collaborate with those working to create a green and peaceful world.