What are the ingredients of a great entrepreneur? I decided to tackle this question head on in this Q&A feature series, where I sit down with numerous dynamic entrepreneurs to find out how they think, what drives them, and the influences in life that have shaped them to become the people they are today.

Introducing Fran Tarkenton
Fran Tarkenton knows better than most what it takes to succeed in a competitive arena. As one of the NFL's all-time great competitors, he was inducted into the National Football League and Collegiate Football Halls of Fame and was an All- American athlete at the University of Georgia. 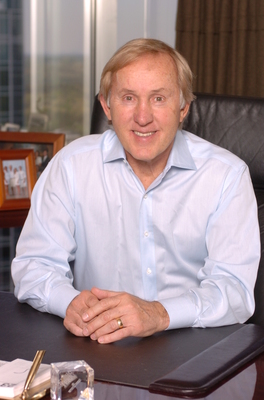 Since 1996, Fran has been a trusted advocate for small business as the founder and CEO of Tarkenton Companies, whose offerings include small business consulting, coaching and software, telecommunications services and insurance-based retirement planning. Fran was also a founding board member of Coca-Cola Enterprises and served on the Board of Directors of Sterling Software, Blimpie International and Pre-Paid Legal Services, Inc. (Bio courtesy of Zeno Group)

Jamilah Corbitt: What does success mean to you?

Fran Tarkenton: That's a big question, Jamilah. I have had my hands in the soil of everything I've done. I think success is being transparent, being truthful, doing the right thing, and treating people the right way with great respect in whatever we do. I don't care whether you're in medicine, politics, sports, or business, success is doing those things I just listed. Doing that will create a happiness for life.

Jamilah Corbitt: How were you able to apply the lessons you've learned in life, into your businesses?

Fran Tarkenton: I think life's lessons have helped me thrive. Let me give you an example. From age five to 11 I grew up in Washington, D.C. about six blocks from the Capitol building. My first job was a paper route in the inner city of Washington, D.C. from age seven to 10. When I was playing college football at the University of Georgia, I had my insurance license, and was the number one seller for Franklin Life Insurance Company. When I played pro football, my salary was $12,500 my first year in 1961, and I also had an off-season job. My off-season job was to work for Wilson Truck System, where I'd go and visit the shipping clerks on their docks — in North and South Dakota — to get them to ship their goods on Wilson Trucks. Wilson Trucks paid me $600 a month.

The reason I mentioned that, is because I've worked all my life. I haven't disliked any of my jobs, and what it comes down to is that somebody saw a value for what I did. That notion has always meant something to me. As modest as it might seem now as I look back on that, I enjoyed working for Wilson Trucks as much as I enjoyed, later on in life, making $50,000 to give a speech. I have always enjoyed the idea of having products or services that brought value to people, and people showing me that value by paying for it.

Jamilah Corbitt: You've launched 20 companies over the past 30 years. What motivates you to create a new venture?

Fran Tarkenton: That's a very good question. People always ask me why do I keep working. I'm not digging ditches you know. *Laugh* I will never retire because I like building relationships. I like solving problems. Business is having products or services that solve problems for someone, or enhances someone's life. My mission of business is very simple: To help other people. Some people say 'No the mission of business is to make money! That's what it is. It's free market capitalism!' — I disagree.

Jamilah Corbitt: Can you name a person that's had a tremendous impact on you as an entrepreneur?

Fran Tarkenton: I could give you so many names, but I'll give you one that you will recognize. Back in the mid-80s, I did a lot of work with Sam Walton, the founder of Walmart. Mr. Sam was a high school quarterback in Oklahoma, and we got to be friends in the 80s. I spent a lot of time with him. He was one of the most humble, generous, and smartest people that I've ever known. He was so committed with what he was doing. He was the first to call the people who worked for him 'associates' and not 'employees.'

I would go with Mr. Sam to open stores all over the country, and he didn't spend his time with the manager or executive, but the people actually working. He would ask them questions like: 'How is your work?'; 'How is it going?'; 'What can we do better?'; 'How can we make your life better?'; 'What products do people want?'; 'What products do they not want?' — I never forgot that. I learned from his actions. I learned from what he said. A lot of my philosophies are steeped in his fundamentals.

Fran Tarkenton: I think they should possess honesty, humility, and the desire to help other people. I think that's essential. If they're built with that, then that will help them thrive, and give them the energy to work and do the right thing.

Jamilah Corbitt: You strongly believe people should watch out for "Silver Bullets." Can you explain what that is?

Fran Tarkenton: Good people are preyed on by all these get-rich-quick schemers. The charlatans out there...the silver bullets. They are out there preying on these people like crazy. They say: 'Come do my deal! Come buy my stuff! Come do my training! I'll charge you some ridiculous sum of money, or I'm going to charge you a little bit of money but going to get you when you get here to buy more.' These people have two traits, Jamilah: 1. They are gifted. They are con people. I'll listen to them sometimes and say 'WOW, maybe I should do that!' *Laugh* I have to catch myself! They're good. That's how they get these people into their web. 2. They've never built a business. They have no idea what that's about. That's like teaching someone to do brain surgery, without ever having done brain surgery themselves. Those people are all over the landscape! That's why I've spent my life working with hundreds of thousands of entrepreneurs coaching them and telling them the truth. Telling them things they didn't want to hear.

Jamilah Corbitt: Is that the motivation behind one of your newest ventures, SmallBizClub.com?

Fran Tarkenton: Yes. About a year and a half ago Office Depot called and said they loved what I was doing and wanted to join with me to create one place where an entrepreneur or startup company can come to get trusted information and knowledge from real entrepreneurs so they can have a better chance of starting and running their business. We launched SmallBizClub.com about four months ago. It's a free website. We now have about 175 contributors that are all entrepreneurs. They have their hands in the soil. They're not these people we talked about earlier. Not only are we giving them access to this type of information, we're also letting them form communities where a carpenter from Atlanta, Georgia can talk to a carpenter in Seattle, Washington. Carpenters learn from carpenters. I learned how to play quarterback from watching and listening to other quarterbacks who played before me. That's what we want to do. Our aim is to build trusted communities of like-minded people that can go there and get information.

Jamilah Corbitt: What advice would you give to the struggling entrepreneur that's on the brink of giving up?

Fran Tarkenton: Come join our club and we'll coach you. If you quit, you'll never accomplish anything in life. Quitting is not an option. You became an entrepreneur because you didn't want to work at big companies anymore. You wanted to have the joy of being the master of your own life. The opportunity to do that in this country is still there...better than ever! Let us coach you. We'll help you out.

Jamilah Corbitt: What's one book you recommend entrepreneurs read, and why?

Fran Tarkenton: I don't have just one book. I would encourage entrepreneurs to read the books of other entrepreneurs. There's a biography of Sam Walton that's one of the best books I've ever read. Read books by people that have actually built businesses. I read the biography of Steve Jobs and it was brilliant because he wrote it on his deathbed with a great trusted writer. He poured his heart and soul out, and told the truth. He told about his defeats, and why he thought the way he did. That's where you learn from.

Jamilah Corbitt: Tell me a fun fact about yourself that few people know.

Fran Tarkenton: Ah-ha! I'll try to give you a real answer here, because as you can tell I'm a pretty transparent person. People that know me, know I have a great passion for life. I love animals. I've got two German Shepherds that are five years old. I've got a nine-year old two-and-a half pound teacup long-haired Chihuahua — and these are central parts of my life as my 10 grandchildren, four children, and my great wife Linda. It's all the relationships that I'm able to make everyday. I'm not a clubby guy. I don't belong to clubs and things. I spend my time with the people. I don't know whether people know that about me or not. I don't go to the important ESPN ESPY awards. I was inducted into the NFL Hall of Fame in '86, and I haven't been back. Not that I don't appreciate it, but my life moves forward. I don't look back very much.

Thank you for sharing your time and wisdom with me Mr. Tarkenton.

Stay updated on this Q&A series by becoming a fan.

Jamilah Corbitt
Social Influencer. Founder of i am a brand®