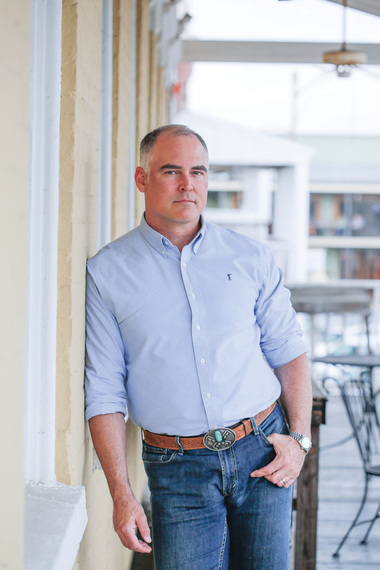 Ace Atkins, while working as a crime reporter for the Tampa Tribune, earned a Pulitzer Prize nomination for his coverage of a cold case from the 1950s. At age 27, his first novel, Crossroad Blues, was published and be became a full-time novelist at age 30.

The Innocents is the sixth installment of his critically acclaimed Quinn Colson series. After a stint in Afghanistan where he trained local police, Quinn returns to his hometown of Jericho, Mississippi. Along a country road, an eighteen-year-old former high school cheerleader is found engulfed in flames; and there's no shortage of suspects in her murder. Working with Lillie Virgil, the first woman sheriff in the state, Quinn and others sort through a web of intrigue and secrets, trying to bring justice to the town of Jericho.

One of the striking things about The Innocents and the other books in the series is how the town of Jericho almost becomes a character. Will you talk about setting?
I'm always struck by how many novels today focus on international intrigue and involve white-knight superheroes. While I enjoy reading them, I try to write a different kind of novel. I write about ordinary people living in a small town such as Jericho, Mississippi. I love capturing the atmosphere of Southern life with its unique ambience and everything that goes on--the good, the bad and the unexpected.

I also think one of the advantages of a series is the author can elaborate on the setting and the characters with each successive novel. I can expand and dig deeper with each novel. Six books into the series, Quinn Colson has become a more complex character, and Jericho's corrupt underbelly has been more vividly exposed.

You anticipated my next question. In the Quinn Colson novels, is Jericho a microcosm of the larger world?
Yes, absolutely it is. You don't have to be in Paris, London or New York, and you don't have to write international thrillers to experience corruption, intrigue, brutality, and criminality. It's as much a part of life in a small town as anywhere else.

So, as you said, the fictional town of Jericho is a microcosm of the larger world. And a protagonist like Quinn Colson has all the flaws and warts you would expect to find in people anywhere: he's had a problematic off-again-on-again relationship with a married woman; has issues with work; and must sort out complicated relationships with his father and sister. 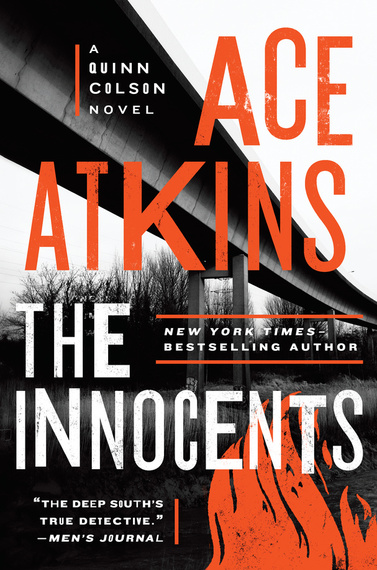 The Innocents, as are all your other Quinn Colson novels, is peppered with authentic dialogue. Tell us how you approach writing dialogue.
I think dialogue is the engine driving a novel. It propels the story and bespeaks character. A novel's characters are made real by their dialogue more than by anything else. I've always felt dialogue is not just what people say to each other; it's what they do to each other with words. I love walking around and jotting down little bits of dialogue I overhear, whether it's at the general store, standing in a supermarket line, or sitting in a restaurant.

Without trying to eavesdrop, I hear the most amazing bits and pieces of conversation, some of which I can fit in a novel.

A short while ago, while walking around, I heard a man and woman talking. From their conversation and the tones of their voices, it was clear they knew each other very well. She gave him a gentle punch on the shoulder and said, 'How dare you sleep with another woman.' He laughed and said, 'What can you expect? I was in jail for a month.' [Laughter]

By listening to conversations taking place anywhere, a writer can find a treasure trove of dialogue that might wind up in a novel.

The Born Losers, a motorcycle gang, plays a significant role in The Innocents. Is any of this based on your observations of real-life people?
Some of what I try to capture in my writing is the way the South was back in the Seventies--motorcycle gangs, overt prejudice, and things like that. And I've always loved films like Easy Rider and I've done research on motorcycle gangs; but most of what appears in the Quinn Colson books is a product of my imagination.

Quinn's relationship with his father, Jason, is interesting. Tell us about that.
In the previous Quinn Colson novel, I decided to bring Jason Colson back. He was something of a ghost in Quinn's life, having been largely absent when Quinn was growing up--Jason was a Hollywood stuntman living the fast life.

When I reintroduced Jason, I wasn't really sure what to do with him. I didn't have him sketched out as well as I'd have liked. I gave the script to a psychologist friend who made a very perceptive observation: he felt that as a Hollywood stuntman, Jason Colson had a risk-taking personality and that trait would permeate his lifestyle. So, Jason is a risk-taker, and gets immersed in various high-stakes ventures. True to form, in The Innocents, Jason wants to get involved in a huge land deal.

Because of Jason Colson's absence all those years, he and Quinn don't have a close relationship. In fact, it's quite strained, as are many father-son relationships in real life.

I work on my books every day except when I'm on vacation. To be a professional novelist means you want to improve with each project, and there's no substitute for always working and trying to write better prose.

I've been doing this for almost twenty years, and it's a constant struggle to keep at it and grow as a writer.

What do you love most about the writing life?
Sometimes I love it and sometimes I hate it [Laughter].

I do love the freedom the writing life allows, but as a professional writer, I've got to make deadlines. I have to deliver a manuscript on time and it has to be good, sharp, and right. My editors expect a solid book, not a rough draft. So, while I love being my own boss, and having independence, the writing life also confers responsibilities.

What's coming next from Ace Atkins?
I'm working on my twentieth novel. It's going to be my sixth Spenser novel. I'm overwhelmed by how accepting readers have been of my taking over the series after Robert B. Parker's passing. Writing those books has been very satisfying.

Congratulations on penning The Innocents, another compelling and atmospheric Quinn Colson novel in a series about which John Sandford said, 'With terrific, inflected characters and a dark, subtle sense of place and history, these are exceptional novels.'