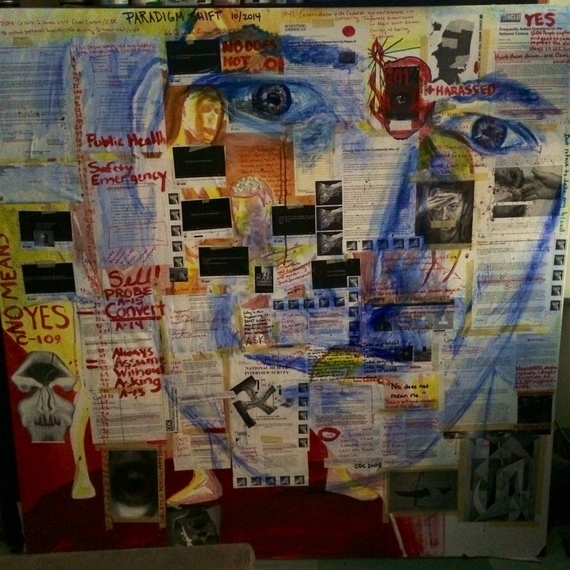 Mixed-media collage/painting made during a prolonged anxiety attack.


In this recently published case study, authors Amir Garakani and Andrew G. Mitton detail the case of a man who... well, he could be me. Age 37 (my age), the man had sudden-onset panic attacks and suicidal ideation. He sought out a psychiatrist, and was given generic Zoloft and Clonopin -- at one to two milligrams per day, which I can say from experience can cause dysfunction of its own. (Clonopin can be great for acute panic attacks; taken daily, it and Zoloft can cause what I call "Mindless Zombification Disorder (MZD)," a condition for which there is -- shockingly! -- currently no prescription drug.)

Despite the heavy medication, my clinical doppelganger's symptoms worsened, in addition to inexplicable pains, "muscle spasms, weakness and tingling in his arms and legs, and general fatigue." And this was just the beginning. Ultimately, man of his psychiatric symptoms resolved with antibiotic treatment, but his physical symptoms persisted and he ended up being unable to work.

Daniel Cameron, M.D., a physician who specializes in Lyme disease, discussed the case in a recent blog post. Cameron talks about the difficulty in diagnosing Lyme with the standard ELISA and Western blot tests that are used by most physicians, and also points out that the patient was not treated for babesia, a common Lyme coinfection, despite having had a positive babesia test.

As a sort of mirror image to the nameless man in the study, I've been diagnosed with Lyme, as well as bartonella and babesia coinfections, and have been treated (in stages) for all of these -- currently taking "a combination of azithromycin and atovaquone," just as Cameron recommends for babesia. (Side note: The latter medication is also used to treat malaria, as babesia is a malaria-like pathogen common to the Northeast United States that has now made its way into the blood supply. I'll discuss more on this in a future article dedicated to Lyme coinfecitons.) And while I still have "good days" and "bad days" (some very bad), my health is markedly better than it has been in about five years and is better than the person profiled in the study.

As far back as 1994, the American Journal of Psychiatry published an article called "Lyme disease: a neuropsychiatric illness." This was 21 years ago, and three years before I was first diagnosed with Lyme disease. And yet, despite being from Northern Virginia and now living in Washington, D.C. where Lyme disease has reached epidemic levels, it took years of visiting family doctors, neurological, psychiatric and other specialists before I found -- through personal, not medical referrals -- a Lyme-literate medical doctor and discovered that Lyme and associated infections are at the root of my most life-affecting cognitive and emotional health issues. That study concluded:

Psychiatrists who work in endemic areas need to include Lyme disease in the differential diagnosis of any atypical psychiatric disorder. Further research is needed to identify better laboratory tests and to determine the appropriate manner (intravenous or oral) and length (weeks or months) of treatment among patients with neuropsychiatric involvement.


My psychiatrist told me recently that she now routinely discusses Lyme disease with patients whose symptoms could be related and who present with other, usually inexplicable and non-psychiatric symptoms. Which is good, but it's baffling that it took an insufferably vocal Lyme advocate (Hey, what can I say? "Know thyself.") to make the case for my non-Lyme-specialist doctors to look into the reality of this disorder. I can't count the number of times my shrink has told me, "You're not crazy" over the years -- and yet I was driven to the brink of losing my mental and emotional faculties because of this nightmarish constellation of insect-borne infections.

And I am one of countless people for whom this is a reality. If you or anyone you know has developed sudden and seemingly causeless anxiety, severe depression, or even psychotic symptoms, do yourself a favor and see your physician with this brochure in hand. Make sure you read every word of it together, including, most importantly, the "Diagnosis" section that states, "Because blood tests at the top three general medical laboratories in the nation fail to detect 35 percent of Lyme antibodies, ILADS recommends the use of [specialized] laboratories that specialize in Lyme and other tick-borne infections ... The CDC criteria for positivity apply only to surveillance and reporting, and should not be used to make a diagnosis." This will be new information for many or perhaps all doctors, and that case should be emphasized.

According to this overview of eight studies evaluating the efficacy of the CDC-recommended two-tier Lyme testing protocol, the accuracy rate of these tests falls between 18-67 percent, averaging 52 percent. This means that a patient who has Lyme disease literally has about the same chance of an accurate diagnosis with the flip of a coin than with the currently recommended standard for diagnosis. That this is the diagnostic standard by which Lyme disease is diagnosed is, despite all psychiatric problems Lyme can cause, perhaps the most insane aspect of this disease. And it means that both doctors must be familiar with Lyme symptoms, including neuropsychiatric symptoms, so that they can make clinical diagnoses and treat symptoms that can be life affecting and as in the case of the man profiled above, even permanently disabling if not properly addressed.