After a bad breakup, Alyssa found her balance--and eventually, romance--by getting back in the saddle.
By Alyssa Shelasky, SELF 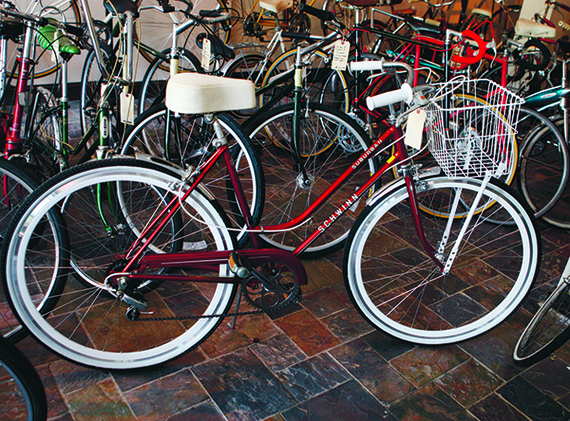 I've never been afraid to take risks, especially when it comes to love. But the spontaneous (OK, manic?) decision to move to Rome to live with Marco (not his real name)--a sexy, cigarette-rolling Italian--was my biggest gamble yet. "Never trust a guy who smokes," warned a friend's husband as I left my Brooklyn, New York, loft, supportive family and well-designed fitness routine behind. Love comes first.

Friend's Husband was right. After almost a year, Marco broke my heart on top of the Spanish Steps. He had come to the conclusion he wanted to be "single forever" Sure. It was an emotional ambush, and it hurt like hell. I started to think real love comes ... never.

Utterly defeated and, for the first time I can remember, dead scared about the future, I flew home to New York City, bitterly aware that the healthy and successful life I'd cultivated for myself had been shut down. My beloved apartment was rented out. My regular writing assignments--which always kept me busy with spa travel, sex experts and starlet interviews--had been contracted out to others. My membership to Equinox, canceled; my 30-class package at SoulCycle, absorbed by my sister.

All I had to call my own was a twin bed at my parents' place and a weak, vulnerable body composed of pasta and pain. The worst part was that my inner strength was injured. Despite years of romantic ups and downs, I had always felt somewhat emotionally bulletproof, like there was nothing I couldn't handle. Because this breakup was so dramatic (Italy!) and so dark (before my eyes, he turned into a different person), I'd lost my bravado along the way. I knew exercise would help me get it back and feel better--we all know that by now, right?--but I was too broke to rejoin all the fancy gyms I had become accustomed to, where tampons are complimentary and Claire Danes is in your kickboxing class.

Frankly, I also wasn't ready to reimmerse myself into the society of fit New York women--the intense, often intimidating go-getters with their perfect hair (even post-sweat!), Free City gear and 3-carat diamonds. A helpful thing to remember when going through a breakup is that you don't have to explain yourself to anyone. Still, people feel free to probe: "Weren't you living in Italy? What happened?!" Aaargh! Interacting with my gym friends was something I couldn't afford financially or emotionally.

So what did I do to get back on my feet? Well, I got back on my feet. It started as a necessity. I had to get places--to meet with editors and visit my sister--and I didn't want to spend a minimum of $10 on subway rides every day. Instead, I hopped on a Citi Bike--NYC's extensive bike-share system--and began the oldest female exercise in the world: hauling ass.

I'm originally from New England and am happiest when outside. I rode my bike to school every day of childhood; my best memories are of biking in Cape Cod. But for me, Citi Biking was not about sunny, freckle-faced merriment. Too soon, too wounded. As they say, "It's hard to see the rainbow when you're sitting in the storm."

Also, the bikes are big, Grover-blue and bulky. Until you get the hang of it, dislodging one of the 45-pound monsters from its dock can be tricky, and locking it back up can be impossible. But it was my best option. So I rode my big log of a bike over the Manhattan Bridge and all through the city because I had to get from the coffee shop to the dentist to the editor to home. Or some version of that.

Now, biking the Manhattan Bridge is no picnic. It's about 12 minutes, or just over a mile, of pretty hard going in both directions, with a gnarly hill at one end. You can't really listen to music, because it's important to stay alert with all the other bikers. All you can do is be present, keep pushing, breathe deeply and move forward. So that's what I did. Two, three, four times a day.

Once I made it over the bridge, I'd have to survive the city. It takes blind confidence to weave through Manhattan traffic--this honking jungle is not for the weak. I was glad to see I still had the mental fortitude to stare chaos in the face. Also, call me a masochist, but what a rush! When you've been dumped by a smoking lothario, you take the endorphins where you can. I was soon riding those streets with Sons of Anarchy ferocity.

If I really wanted to rage, I'd ride the Brooklyn Bridge--a sea of clueless tourists wandering in and out of the bike lane. Everyone hates these people. Gandhi would hate these people. "You're going to f--ing kill someone!" I'd wail at the sightseers in their I ♥ NEW YORK T-shirts. With the help of my middle finger, the healing process had begun. My inner badass was alive and well--it was good to see her again.

I was getting my outer strength back, too. At the end of each day, my muscles ached the way they would after a double Spin session. I'd take long, hot baths, noticing the definition of my calves and tightness in my core. My goal, of course, was to feel better, but it was reassuring to see one part of my life more intact.

After a month, I felt steady enough to go out with friends again. As I got ready, I would notice a glow to my skin--hopefully from within, unquestionably from being outside instead of on the couch. Everyone said I looked terrific. They were being generous, but I allowed it.

My friends got a kick out of me hopping on the bike after our buzzy nights of rosé and restaurant openings. "I'll pay for your cab," one friend always offered, but I couldn't wait to unlock that bike (effortlessly now!) and sail away. And summer nights were the best time to ride. The tourists were gone and the streets were more spacious, allowing me to pedal with a young-hearted freedom that made me feel like myself again. I came to rely on that warm summer air on my face and slight burn in my legs as a way to digest the night, to hear my own thoughts and to--once again--spread my wings without fear.

Two months passed and I still hadn't rejoined a gym. Out of the blue, my pal and occasional personal trainer, Ricky, offered me a free training session to catch up. When I walked in, he gave me an epic "Damn, girl!" and as we did push-ups, sit-ups and squats, neither of us could believe how strong I'd become. "All this from Citi Bike?" he said in disbelief, motioning to my tight new booty.

It does seem kind of crazy. I figure that with all the riding--plus walking and schlepping the bike--I burned 300 calories a day, every day, for two months. That's not as rigorous as Spinning five days a week. But there's something to be said for moving our bodies organically, in a survival-oriented way; pushing up a killer hill because there's a job interview on the other end, not because you've paid $30 to turn the dial up. Plus, every hour on the bike was an hour I wasn't eating a cannoli.

By summer's end, I could see the rainbow, and Rome was in the past. I even went on a blind date that started at Bobby Flay's new restaurant and ended at a bike dock a couple of blocks away. My date had a Citi Bike membership, too, and offered to ride with me toward the Manhattan Bridge. My heart did a happy dance as he released the bike from its dock with one graceful tug and smoothly adjusted the seat to his height (6 foot 2, ahem!).

Riding had started out as a solitary, somewhat combative experience: me against the world. But by the end, the bike had become a vehicle for the beautiful thing that is strength through pain. I couldn't help but notice how nice it was to share the restorative summer air with someone else--the shine of the city lights, the sounds of frantic, unfiltered life.

At a streetlight in SoHo, with our bikes side by side, he kissed me. I melted. And then I reached for my handlebars and pedaled forward.

7 Books To Read With A Broken Heart