How is the Internet impacting the human being? Ever since the beginning of technology humans have expanded new forms of connection. Modernism and alterations have influenced a greatly linked world. Alexander Graham Bell, Steve Jobs, Mark Zuckerberg; each one of these innovators have bridged the gap between human to human interaction. What does this mean to the world? Everyone knows the impact that technology has placed on the economy, money flows from each click or share. However the impact on the individual, and the effects of and on each person are rarely noted. 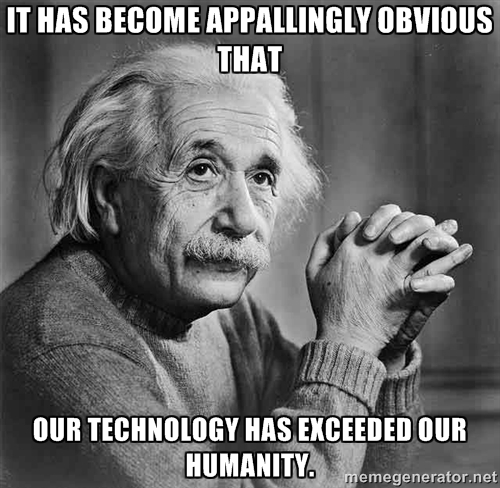 Janus Bryzek forecasts not only the opportunities created by the Internet of Things [IoT], including its economic values (which is now measured in 10's of Trillions USD); making it,

'the largest growth in the history of humans.'

This is a wholesale disruption of major global markets, without considering the major disruption to human life; and that's going to be disrupted in every aspect, particularly the one's we haven't considered. In the world of "connected diapers". Sensors are leading to a today where a child's every move in known and monitored. These same sensors will eventually provide emotional data as well. Leading to a potential tomorrow world where you can know how your child feels at school or on the playground. This at onset sounds incredible, but could lead to "to massive digital over-parenting". Children need the freedom to explore the world, experiment and grow into rounded adults.

Ironically limited research exists and the various documents, White Papers and the Pew Research Center: The Internet of Things will Thrive by 2025, do not in any real depth include the challenge of how IoT impacts upon humanity. We concur with Nick Bostrom's [Future of Humanity Institute] perspective of,

What if, [2 of the most powerful words in language], What if the IoT was explored through the lens of the humanity? What if we were brave enough to ask controversial challenging questions? Questions that empower a readjustment to technology; one's that encourage us to collectively think about what we do with the future instead of being enslaved to it, enabling us as Nick Bostrom suggests,

'to see the bigger picture for humanity, so that we can more wisely choose what to aim for and what to do, which can only make a positive contribution to the world.'

'one class of existential risk is that of flawed realization: Humanity reaches technological maturity, but in a way that is dismally and irremediably flawed.'

Questions are beginning to be asked: Steve Wozniak, Stephen Hawkins and Elon Musk are all concerned about the threat that IoT poses to humanity. Elon Musk recently donated $10million to the Future of Life Institute that

'strives to mitigate existential risks facing humanity by catalyzing and supporting research and initiatives for safeguarding life and developing optimistic visions of the future, including positive ways for humanity to steer its own course considering new technologies and challenges.'

Marie LeRose, of The Dalai Lama Centre for Peace and Education, shared the reason for their upcoming conference: Human Connection in a Digital World,

'research takes time to conduct and we have less time to reflect as we spend more of our time being digitally connected.'

The conference aims to

'provide an opportunity to pause, ask questions, reflect and become the architects of how we're going to use technology.'

The time is right for catalysts to embrace the dialogue necessary for us to push humanity forward and strive to create a better society. Are you interested in how we evolve the IoT, instead of letting it happen to us? What if we think differently? What if we created the www.internetofhumanity.org Would you want to be part of this debate and dialogue?