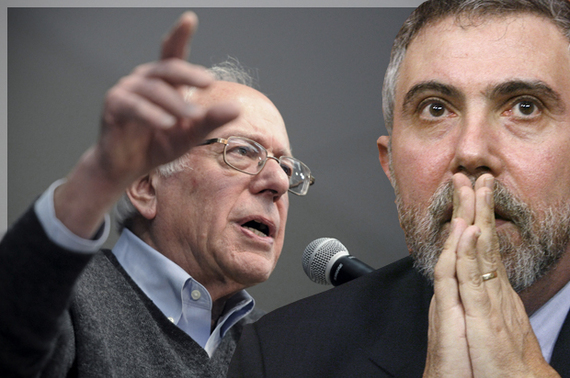 Here are 10 of the best responses from Sanders supporters across the Web:

"Ordinarily I wouldn't pick on a particular columnist but I respect Paul Krugman. Also, his perch at the New York Times gives him broad influence - especially just two and a half weeks before the important New York State primary. But his piece today (which I've attached) is shot through with errors.

1. The biggest Wall Street banks did indeed precipitate the crisis on Wall Street in 2008 because of their gambling in newfangled financial instruments and fancy derivatives even they didn't understand.

2. Their size did make a difference because they were so interconnected with other financial entities both in the U.S. and around the world that they were "too big to fail." Today's biggest Wall Street banks are much bigger than they were in 2008.

3. Size also has a bearing on their political influence. The reason the Glass-Steagall Act was scotched by Bill Clinton's administration, and the Clinton administration wouldn't agree with the CFTC to regulate derivatives, had a lot to do with the influence of Wall Street over the Clinton administration and over Congress. The political power of the biggest players on the Street is even larger today - as evidenced by their capacity to whittle back significant parts of Dodd-Frank in the regulatory process.

5. Bernie's other ideas -- for a single-payer plan, and for free tuition at public institutions of higher education - are sensible, and also backed by many experts. It's well-established that a single-payer plan would be far less costly and deliver far better care than our own system, which is based on private for-profit insurers. As to free tuition in public universities, we were well on the way to this goal in the 1950s and 1960s. It was and is a logical extension of free K-12 education.

6. Finally, the current brouhaha over who's "qualified to be president" was arguably started by Hillary Clinton. Personally, I think neither she nor Bernie should be calling the other unqualified, but to blame Bernie for this exchange is simply incorrect.

What do you think?" 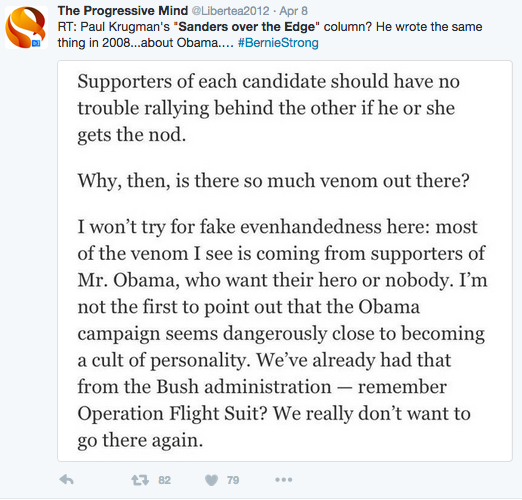 "This is incredible. This hit job comes days after the "Bernie doesn't know how to break up banks" myth was debunked by New York Times (his own publication) and he is still clinging to the narrative(1). All the while he is exactly defending the big banks as if they were innocent victims of the mortgage lenders. Let's not count any of the credit default swaps nor defrauding the rating agencies that was done by the major Wall Street players. Then, now, after FactCheck revisited and qualified the statement that Hillary taking money from fossil fuel industry lobbyists was correct he still wants to harp on that as if it was untrue (2). He, as a supposed journalist, still wants to use Bernie Bro to insinuate that Sanders is sexist. Which by the way, the media seems to be very lax on calling out the "HillaryBros" (3). So all of this together is supposed to paint Sanders as a person with character and value issues? Give me a break. Hopefully New York Times's readership can see through the blatant hatchet job."
(1) http://www.nytimes.com/2016/04/07/upshot/yes-bernie-sanders-knows-something-about-breaking-up-banks.html
(2) http://www.factcheck.org/2016/04/clintons-fossil-fuel-money-revisited/
(3) http://berniebrowho.tumblr.com/

"This essay is breathtaking in its dishonesty. Orwell could have used it as an example of the hack genre in his classic "Politics and the English Language."

PK sets up the fraud by citing "many if not most... wonks." He names not a single name; doing so might out them as campaign surrogates or advisers. If he were honest, he would have cited the 170 economists sttesting to the soundness of Sanders's proposals.

There's more weasel-wording: "some" Sanders supporters are angry cult members. This is not only ridiculous, it's a lazy and shameful way to categorize the millions of people I would assume Hillary needs should she win the nomination.

And how about that over-hyped editorial board meeting? The News is owned by billionaire Mort Zuckerman, a Neocon war hawk who's given hundreds of millions to the Clinton foundation. Robert Reich has already made short work of the media "going bonkers" over Bernie's answers, which were essentially correct.

PK fails to note that Sanders let off his steam based upon reading a provocative misleading headline in the Washington Post -- another big media contributor to the Clinton foundation.

No surprise that the consolidated corporate-owned media are actually the ones going over the edge here, with their identical talking points coming straight from the Clinton campaign. Not one original thought among the slew of sponsored content propagandists with the nerve to call themselves pundits and journalists."

"Yes, Secretary Clinton has apologized for her support for the free trade agreements, but her apology has not given displaced workers their jobs back; nor has her admission that support for the Iraq war returned the dead from their graves. She has made some bad decisions as we all have, but the effects of her previous mistakes have been too large to overlook. Sanders is no angel,but he does not have as much blood on his hands."

"Given the choice of candidates, I'd choose the one who voted against the Iraq War and is in favor of Medicare for all, single payer health care. Bernie has made his positions clear and has a right to defend them against spurious claims. Supporting the Iraq War (and most wars since WWII), trade agreements that send US jobs overseas, and opposing Medicare for all disqualifies a candidate in my view. That's the reality for me. You can call it idealism, but I call it sanity."

I'm a US citizen living abroad in a Nordic country. I work here, and pay ~1/3 of my income in taxes to my host country.

I observe the citizens of my host country paying their taxes into the system as well. This Nordic country boasts very little systemic political and financial sector corruption, excellent public transportation (I don't have to own a car, and thus don't have to devote a significant chunk of my income to associated expenses), high-quality cradle-to-grave medical care, good preK-12 education, free university education for anyone who can pass the entrance exams, clean and safe streets, a surprisingly multiethnic population - and a conspicuous absence of the petulant self-righteousness you decry in my fellow Americans at home.

I managed to carve out a life for myself up here, and I'll apply for citizenship as soon as I'm eligible. If my fellow Americans at home could have a reasonable approximation of what I get for paying taxes here, I would be delighted. That's why I support the Sanders campaign. And that's why your blowing off his campaign from the Olympic heights of a Nobel Prize very much rubs me the wrong way. You could use your considerable clout for fair and just economic policies in the US. Instead, you seem to have sold out to neoliberalism."

"Lol he actually said 'Bernie bros' non-ironically. Krugman is becoming a parody of himself."

"Paul Krugman over the edge?"

Did Krugman go too far in calling Sanders a Bernie Bro and attacking the candidate in Sanders Over the Edge, or did he hit the nail on the head? What do you think?