At the 2014 Grammys, I performed "Same Love" alongside Madonna, Macklemore, Ryan Lewis, and Queen Latifah while 33 couples were married on live television. And then I floated to the planet Orkjar on a golden pop-tart, because in what universe does a chubby lesbian get to be a red sparkling princess lady that sings about gay love? I cried for hours in the rehearsal, overwhelmed by the implications of what we were about to do. 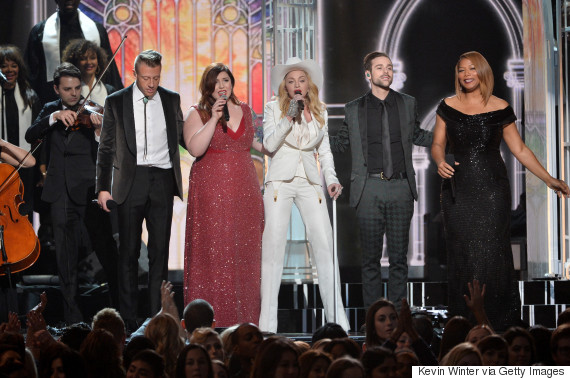 The day after that surreal performance, I felt electric. I was in the middle of recording my first full-length album, and was scheduled to appear on a live celebrity talk show to promote my single. It was one of those shows where they recap vapid useless celebrity gossip, so naturally I couldn't wait to dish on the moment when I pulled up to the glitzy after-party in a dirty red minivan with my parents, or when my girlfriend and I danced with a tipsy Anna Kendrick, or that my mom continued to insist that Skrillex was the nicest boy she'd ever met, and we ought to "sing a duet." Unfortunately, this interview on this TV show was nothing like that. This interview pulled the golden pop-tart rug out from underneath me.

The morning-after interview started the way most interviews do: "How was working with Macklemore? Did you know Madonna was going to come out on stage? Do you shit cupcakes?" For some reason, the interview took a strange turn. Perhaps it was the interviewer's hunger to be taken more seriously, to have a compelling story, to catch tears falling on the couch a la Barbara Walters. But whatever the reason, I was asked without relevance or warning about my childhood abuse, as well as being raped in an army barracks as a teenager. Any hopes of giggling about Skrillex evaporated quickly. I was aware that the information of my sexual abuse was out in the world, but that morning, when I was putting the final touches on my makeup, my sexual traumas hadn't crossed my mind once. Why would they? I tried to respond as best I could, knowing that it was live television, but everything afterward was a blur. As soon as the cameras were off, I went into a full-blown panic attack. I didn't know it then, but this same situation would happen multiple times in the year.

I questioned so much after that interview. Have I done this to myself? Is this what happens when you are vulnerable and open? How do I take back control of the telling of my own story? I started noticing weird shit after that interview -- the disassociation we create between us and celebrity. How much I craved honest connection, and how I realized I was only receiving a strange form of being collected. I started realizing my own fascination with celebrity culture. Started wondering why people hate the Kardashians so vehemently -- or, on the other side of the coin, adore them and obsess over their facial structures. It dawned on me -- people have misdirected anger at the Kardashians or celebrities who have a disproportionate ratio of fame to talent. They don't actually hate Kim Kardashian. They are upset with the culture that fetishizes them -- where media prioritizes and praises ratings rather than substance. The Kardashians are simply opportunists. I began fearing the heavy societal commodification of celebrity culture, and was deeply saddened with the realization that music consumption is only vaguely a part of the equation for successful artists.

I wrote "Ribcage" because I was exhausted. I wrote it because my truth was hungover and needed a sarcastic joke. I wrote it because "Secrets" was an optimistic version of vulnerability, and because self-empowerment doesn't always come wrapped in a bow.

I will continue to talk about my own sexual trauma when I feel safe enough to, and when I'm in control. I still believe in the power of vulnerability -- that openness is the key to empathy, and that empathy is the key to human connection.

singer-songwriter, poet, comfy-bed enthusiast, hella gay. i've got my heart on my sleeve.