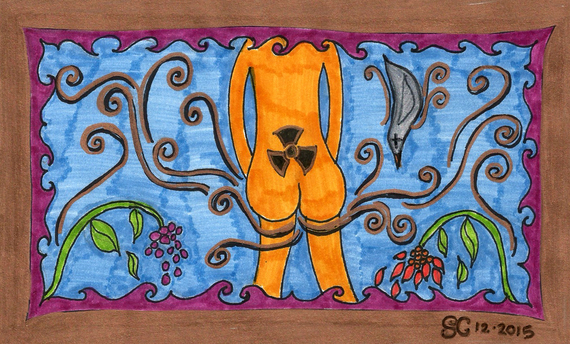 "You don't trust me," Peter said with sadness in his voice.

He had been trying for months to get me to fart in front of him and I refused.

When we first began seeing each other, I was shocked at how quickly his comfort level came to include farting with abandon in my presence.

Fortunately, due to either a specific diet or just good genes, his passed gas was completely inoffensive, and combined with my life-long inability to smell anything but the most intense of odors, the only issue I had was my embarrassment at the incredible volume, diversity in style and frequency with which it occurred.

I was also concerned about the my family's reaction as we are not above mocking each other for socially embarrassing behavior, farting being at the top of the list.

I felt protective of my new love and wanted to spare him from becoming a marked man, the butt of relentless jokes by my warm and welcoming family whose one major flaw, or attribute depending on your perspective, is a sick and twisted sense of humor that spares no one.

Meanwhile on the home front, I had my own problems. Having had Crohn's Disease since I was 11, I was already quite aware of the potency and lingering effects of my own digestive issues. Whenever we drove by an oil refinery or sewage plant all fingers pointed at me, and I became rather sensitive about my role as the family farter.

I grew used to the teasing and collective disgust of my family, and in no way did I want to bring these elements into my new relationship with the man who was quickly becoming my soul mate and the love of my life.

But the more I tried to shield him from my horrific farts, the more he desperately wanted me to be free and let loose in front of him, considering it a reflection of my holding back in the relationship and thus avoiding a certain intimacy that I was sure could only end badly.

"I DO trust you," I insisted. "It's just that you can't imagine how bad it can get. I'm telling you, you will be in a state of shock and disbelief that something so vile could come out of me."

"Oh Honey, I'm sure you're exaggerating." He saw me through rose-colored glasses and refused to acknowledge that his romantic ideal could be capable of anything but the most feminine and delicate little bubbles of gas that smelled of rose petals and lavender and then immediately evaporated.

Eventually, as time passed, I began to test him. If we were watching TV and he went to the bathroom, I would fart alone and then privately evaluate the strength. If it passed quickly and wasn't terribly malodorous, I would then fart again in his presence, feeling confident in having vetted the situation beforehand.

"Yeah," I'd reply woefully. "That was nothing compared to what I'm capable of. But at least I'm farting in front of you."

He was genuinely thrilled. "I know! It's great!"

I pitied his happiness, as it was clear to me that he was blissfully ignorant as to what was in store for him.

As time passed and we fell deeper and deeper in love we began to discuss marriage. I felt in the spirit of full disclosure it was only fair to let loose with one of my most heinous farts before the nuptials.

But for whatever reason, as the date of our wedding approached my farts became innocuous. No matter how many times I tried to warn him he still had no tangible way of grasping the utterly horrific havoc my body was capable of wreaking on his sweet, unsuspecting adoration.

The wedding day was magical, with my family contributing everything from the flowers, photography and food to the hair and make-up, our good friend officiating and my beloved grandnieces dressed as fairies. It was simply the happiest day of my life.

And then it began.

It wasn't because I knew Peter was now my husband and had to put up with whatever human flaws emerged. I had done my best to give him a sample of what was coming, but for whatever reason was unsuccessful.

No more than 24 hours after we became husband and wife, the farts returned. And they were bad.

Unlike his previous acceptance of my demure gas passing, his face registered the slightest hint of shock, and it was obvious it was beginning to dawn on him that perhaps I had been telling him the unvarnished truth all along.

Today we have been blissfully married exactly two weeks and three glorious days. And in this short period there have been more offensive farts than he experienced in the previous three years of our courtship.

He is taking it very well. He doesn't mock or tease me. When necessary he hides under the blankets but always with a twinkle in his eye.

He tells me how much he loves me and how my farting in front of him is a reflection of our intimacy. He is a world-class keeper and I couldn't adore him more.

But, sadly, he has no idea that the worst is yet to come.

This first appeared in "The Coffeelicious" on Medium