The author himself Joggling on a track in Princeton, NJ.

"Joggling" is the sport of running while juggling, and yes it's a real thing. I learned about joggling from Bill Giduz, the man who introduced it in the late 1970s. I first met Bill at the finish line of the Davidson College Freshman Cake Race in 2001, and we soon became friends. I spent four years learning joggling and many other tricks from him, but only recently did I begin to take joggling more seriously as a way to return to running after a long hiatus. Curious about the origins of the sport and why others are drawn to it, I interviewed Bill and two of the fastest jogglers in the world: Dana Guglielmo and Michal Kapral. These are their inspiring and hilarious stories.

Joggling has its origins in a happy accident in 1975 when Bill Giduz brought his juggling balls to the N.C. State University track to practice some tricks after a workout. That day, he started jogging as he juggled and discovered something amazing: the pace of a three-ball juggling pattern easily matches with a wide range of running cadences. In other words, every throw coincides with the natural motion of the arms. Bill realized that the motions complemented one another beautifully, and he called it "joggling" almost immediately.

In 1976, Bill learned that the International Jugglers Association (IJA) was looking for a new editor for their newsletter. The idea appealed to him, and he traveled to the yearly IJA festival and began taking photographs and interviewing people. No one else showed any interest in the volunteer editor position, so Bill was elected. Then, in 1979 Bill received a serendipitous press release from juggling educator Dave Finnigan announcing that he had "joggled" a 10k race. Bill had never spoken to Dave about joggling, nor had he ever heard another person utter the word, but after hearing from Dave, Bill began writing a column called "The Joggler's Jottings" for the IJA newsletter. He received a few responses from others interested in the sport, and so Bill invited all jogglers to organize a race at the 1980 IJA festival in Fargo, North Dakota. 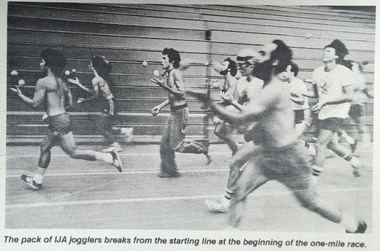 That first joggling race was held at North Dakota State University's indoor track (photo courtesy Bill Giduz). The eventual mile champion actually missed the starting gun and had to sprint barefoot to catch up, eventually overtaking the other competitors to finish in 5:44. The event was so popular that it became an annual IJA tradition, and thus joggling was born.

Of the many talented athletes to try joggling over the years, one of the best known is the current marathon world record holder, Michal Kapral. He became a runner after college as a way to lose weight, and only intended to run one marathon. However, since 1999 Michal has run 30 marathons, including a 2:30:40. When his second daughter was born in 2004, he decided to raise money for Toronto's SickKids Foundation by running the Toronto Waterfront Marathon while pushing a baby jogger. Michal "accidentally" set a world record for fastest baby-pushing marathon in 2:49:43, and SickKids Foundation delightedly asked what he would do next year. Michal said that he would juggle it, and he did, setting a new world record of 3:07:49 and raising another $2,000 for charity.

Michal's record was almost immediately broken by Zach Warren, and the joggling duel was on. The two traded the record back and forth until the 2007 Toronto Waterfront Marathon, when Michal joggled a 2:50:12 in a race that he described to me as excruciating. That record has held ever since.

Joggling may be a silly activity, but Dana Guglielmo explains that she enjoys being serious about her silliness. Dana came to joggling after a strong collegiate track career at the University of Richmond (17:33 5k, 10:36 steeplechase). What makes her athletic performance even more impressive is that she developed inflammatory arthritis when she was 17. The pain can be debilitating, and she has to be careful to manage her training and racing in a healthy way, but ultimately she refuses to let it slow her down.

Dana loved the crowd response from running the steeplechase in college, and began joggling after graduation to stave off boredom during road races. During her training for her first joggling half marathon, she experienced a flare-up of arthritis and yet she still managed a 1:35:15. That experience left her thirsty for more, and Dana set a goal of running the 5k joggling world record at the 2014 Codependency 5k. In spite of pausing three times to pick up dropped balls, Dana clocked a 20:40, shattering the previous women's world record by seven minutes.

Dana loves the competitive aspect of joggling, and describes herself and fellow jogglers as "competitive goofballs." However, joggling also gives her a platform for discussing the widespread impact of the varied forms of inflammatory arthritis. After volunteering with the Arthritis Foundation, Dana was inspired to do more, and she now raises money for the Arthritis National Research Foundation and shares uplifting stories about how ordinary people can manage the chronic pain of arthritis.

Joggling is a unique challenge, even for talented athletes. As fatigue sets in, it becomes increasingly difficult not to drop the balls. A joggler has to ignore the million nagging disturbances of pain, other runners, and changes in the running surface. The motion is simple and fluid, but it doesn't allow for a moment's distraction.

But as anyone who has joggled a race will tell you, the physical challenge is only half of joggling's charm. Joggling quickly attracts the attention of everyone along the route. Jogglers like Dana and Michal find a way to feed off that energy even as they put on a brief show for the people they pass. Children laugh, fingers point, everyone smiles. And all of this has grown out of Bill Giduz's chance discovery at a track in 1975. A few absentminded throws, a glance ahead at the horizon, and a tentative first step towards a new way to run. 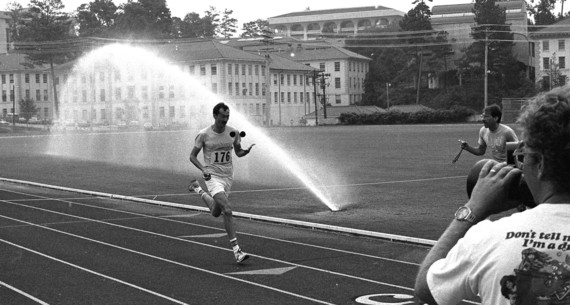