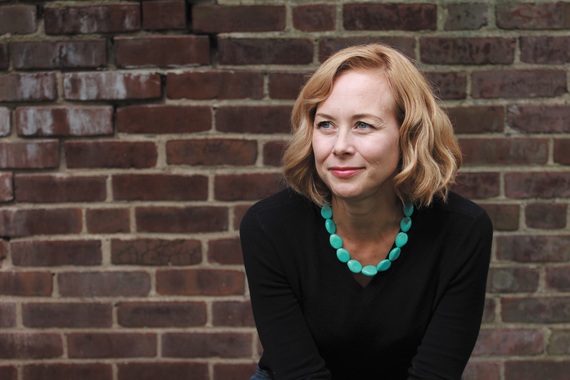 Writer Cecilia Galante was raised in a strict religious commune until the age of sixteen.

Her YA novel, The Patron Saint of Butterflies (based loosely on her own experiences), was a NAIBA Best Book of the Year Award, and an Oprah's Book Club Teen Reading Selection.

It was also officially banned.

Galante's latest novel, The Invisibles, is for adults.

It was published yesterday.

Here, Galante opens up about her past, her banned book, and why we are always in a process of becoming.

Congratulations on your new novel. Was there a moment in your life when you knew you needed to write a book?

I do remember the period of time in my life when I realized (that).

This need, I believe now, was born despite a life shut off from the larger world, a life that not only encouraged silence, but demanded it and a need that in the end, refuted everything I had been taught.

My first book, The Patron Saint of Butterflies, was a loose reimagining of the first sixteen years of my actual life in a fanatically religious cult, a place where babies were separated from their parents at six months of age and raised in a mass nursery, a societal structure that preached, above everything else, that we as children, were nothing in the eyes of God.

"Less than the dirt beneath his sandals," the leader used to tell us, and I believed him.

Not only did I believe him, I absorbed this mantra, adhering so tightly to it that it became my life's blood.

Until the edges of this bandage began to fray and loosen.

The result of this understanding was an intense desire to scream. And after that passed, to write.

But when I began to transcribe these images, putting them down in words on a page, they became real. For the first time I was able to use my voice, not only to speak of these things, but to bear witness to them.

It was a transformative experience, one that shaped me forever after. And does to this day.

The Invisibles is your first novel intended for adults. Was it a different experience writing for them (as opposed to younger readers)?

I think I prefer writing for younger readers, if only because I feel that being an adult, and therefore trying to transcribe things as honestly as possible as an adult, is ridiculously difficult.

Adults are so complicated, with so many layers, and digging down through all those layers can be exhausting.

Writing for a younger audience is much more forgiving, because kids still don't possess quite as many of those layers. Their personal narratives and emotional arcs - while still just as painful - are usually much shorter and less convoluted than adults.

Your book, The Patron Saint of Butterflies, was officially banned a few years ago. Can you talk about that experience?

The only information I ever got about The Patron Saint of Butterflies being banned was from my publicist at Bloomsbury. She told that me that there was an article in USA Today that had listed it as banned for "religious reasons."

We never got any more information than that, but I have to assume that such a decision was based on the fact that the book ultimately spoke out against organized religions of this kind and that the people who banned it took offense to that.

We live in an amazing country though, where two dichotomies such as this can exist alongside one another and I'm grateful for it.

The Invisibles- which is brilliant, a real page-turner - considers the ways in which the past and present connect. How much of our childhood, our past, would you say, determines who we ultimately become?

I think our past plays a huge part in the people we ultimately become. How could it not?

The things we experience in our formative years are some of the most powerful and affecting we will ever experience, if only because nothing else at that point has made its mark.

It's like a stamp made in permanent ink on a blank page - afterwards, you can realize the mistake that was made by putting it there, but it takes a hell of a lot of effort to erase it. And sometimes it's never erased.

Sometimes, despite all the elbow grease and Magic Erasers, a faint outline of the stamp will remain. And even just a faint outline, like the edges of memory, can still be seen and felt, sometimes throughout the remainder of our lives.

This is exactly what I was trying to illustrate in The Invisibles.

We never really arrive at who we become.