The Apple iPad 2 was launched by the so-called "rockstar CEO" Steve Jobs today in San Francisco to a broad reception of live blogging, tweeting and "cloud" participation online. It will give shareholders a brief moment of comfort to see that Steve is still fit and well despite his medical leave.

While there has been a lot of online coverage of events and conferences in recent time, the live blogging and tweeting around the iPad 2 launch shows that we really are living in a real-time 'news' consumption age. The concept that you can have a press release to 'spin' an announcement anymore is just ridiculous. You are dealing with real-time assessment of your brand, your products and capability now. It is engagement 2.0. Now... back to the iPad 2.

The new iPad 2 will retail at the same base price ($499) as the old iPad, and will retain the 10-hour battery life. But the new iPad is 1/3rd thinner, 10% lighter and is more than twice as fast as the old iPad. The video processor, often criticized when it came to gaming and video playback, has been upgrade to 9x the speed of the old video chip.

The iPad 2 also comes with two cameras, a front and rear-facing camera enabling the FaceTime live video chat capability. The iPad 2 has simple HDMI integration also so you can play your iTunes video downloads straight to your HD TV, infact, the Airplay feature even allows you to stream video and pictures to your TV and other devices. You can sync wirelessly, too, with the new iPad 2.

Apple has come up with an innovative 'case' they call a smart cover. The case is actually a screen protector with magnets that integrates with the iPad 2. When you remove the screen cover, the iPad 2 automatically senses it and powers up automagically.

Apple has sold more than 15 million iPads since their launch last April, and they've just sold their 100 millionth iPhone globally. Impressive! But the really interesting stat is that they've remitted more than $2 billion to app developers globally (350,000 apps plus), and have more than 200 million account holders who've supplied their credit card details to the iTunes store. With 200 million customers, they would be a major competitor to any bank if they decided to build banking/payments into the iTunes store...

What the iPad 2 means for service organizations

The iPad 2 continues to shift expectations for consumers. Consumers now have very high interaction and user experience expectations, but most service organizations are still stuck in the '80s and '90s when it comes to 'functionally'-led solutions for customers. User interface design needs to be a core competency of any services business these days, or you need to have a great supporting team in place.

Apple showed off Apps like iMovie ($4.99), GarageBand ($4.99) and the FaceTime (free) App as examples of how interaction is changing as a result of the iPad. But more than that, Apple showed how the iPad is changing interactions in schools, at the workplace, for doctors treating patients, for pilots doing flight planning and many other examples. The iPad user interface along with multi-touch is reinventing these types of journeys through smart redesign of the interaction.

To expect that customers will be forgiving in the face of poor operating procedures, poor interaction design and outdated screen design and flow is a huge mistake. Using regulation or internal bank policy (for an example) as an excuse, just won't cut it anymore. Customers will be measuring the effectiveness of their service providers based on these types of 'interaction' metrics now, not on how many branches you have or what your interest rates are.

Start thinking about redesigning your customer journeys and interactions. This is a core capability for any customer facing business these days. 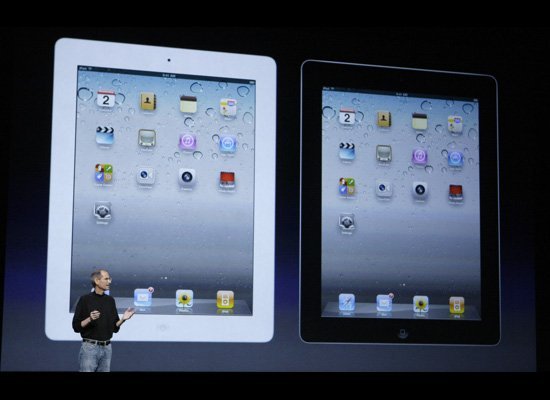 The iPad 2 launches in the US on March the 11th, and in the UK, Australia, Canada and a bunch of other countries on the 25th of March. You can check it out on the Apple.com site right now!

Mobile Crunch did a great live coverage on their blog of the iPad2 launch event if you'd lke more details.