No one believed that a nuclear deal with Iran was possible. No one thought marriage equality was going to happen in our lifetime. No one thought we'd see the American flag over our embassy in Cuba.

It is all happening! 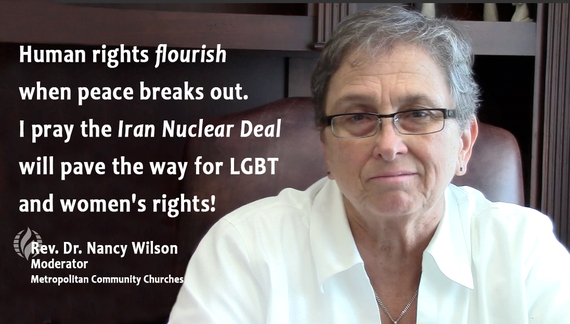 The deal with Iran is not perfect, but it is surprisingly good! Coming up with an agreement that United States, Germany, Britain, France, Russia China, and Iran could sign may be one of the greatest diplomatic feats of history. Does this guarantee peace? No. But this committed coalition of countries with a hard won deal has given the world the potential for more stability in the Middle East.

Jewish leaders in the United States came out on both sides. Hundreds of rabbis signed a statement supporting the deal while lifting up the need to continue challenging Iran's support of terrorism. Think Progress quoted Major-General (res.) Israel Ziv, former head of the Israeli Army's Operations Directorate branch:

"There is no one in Israel who thinks the nuclear agreement is a good agreement, but the discussion should not focus on that," he wrote in an op-ed for the Israeli news site Ynetnews.com. "Because this agreement is the best among all other alternatives, and any military strike - as successful as it may be - would not have delayed even 20% of what the agreement will delay, not to mention the risk of another flare-up with Hezbollah, which an operation against Iran would have generated. The agreement is an established fact, and it's not particularly bad as far as Israel is concerned."

There is no question that this does not make Iran a friend of the West. Hatred for Israel and the West expressed by Iranian leaders in the past is not gone. Many in the LGBTQ world opposed the deal. It is true that this deal ignores religious authoritarianism that oppresses women and minorities.

However, the lifting of the sanctions has the potential to help women and those most vulnerable to the sanctions from the West. I believe increased trade may lighten the burden and create opportunities for women who represent more than 50% of students in Iranian Universities.

While the purpose of the deal is forestalling Iran's capacity for nuclear weapons, the collateral benefits could be far reaching. This deal with Iran shifts the balances of power in a region rocked by decades of war. This deal could lead to a breakthrough in how we resolve the war in Syria, combat ISIS, and address the terrible refugee crisis. As Iran becomes more of a part of the community of nations, coming out of its isolation, economically, and culturally, political changes are more possible.

A statement by Iranian Americans in the New York Times recently said, "...diplomacy with Iran has the potential to do much more than prevent a war. It provides an opportunity for engagement between cultures, people and ideas."

As the global moderator of Metropolitan Community Churches, I have been part of one of the greatest social movements for changing moral and social norms in history. Today, the world knows that morality is not determined by your gender expression or whom you love. LGBTQ people around the world are standing up and claiming our rightful place as part of humankind. Many of us lost our lives in the fight -- all of us experienced harm -- but we kept on demanding our human rights -- and will continue until all countries recognize our human dignity.

My experience with gaining marriage equality for LGBTQ people leads me to believe that the greatest hope for the Iran deal is human rights. The less isolated a country is, the more it trades with and opens itself culturally to the rest of the world, the more difficult it is to keep human rights abuses secret, and the more difficult it is to resist the movements within its own borders for democracy.

Human rights flourish when peace breaks out! The Iran Nuclear Deal will pave the way for LGBT and women's rights!

I have met refugees from Iran, same sex couples who feared for their lives, who had to escape with nothing, just to be able to be who they are. Let's open the doors and windows so change is possible. Make this deal with Iran to prevent a war and expand human rights for women and LGBTQ people.

For those of us LGBT folks who are getting accustomed to marriage equality and other basic rights and freedoms, telling our Congressional representatives that we fully support the Iran deal is an important way to continue to win the struggle for LGBT human rights.