Clinton's US colleagues are supporting neo-Nazis in Ukraine

When Hillary Clinton compared Russian President Vladimir Putin's actions to Adolf Hitler in remarks this week, you wonder if she was aware that the US government is supporting a government with ties to neo-Nazis in Ukraine today.

Claiming that Putin is acting like the former Nazi leader is unsophisticated and preposterous, particularly for a seasoned official like Clinton. But did she really not know that the US is openly supporting the anti-Semitic Svoboda party in Ukraine and that any mention of Hitler could bring attention to America's ties to the neo-Nazi movement in the former Soviet Republic?

You wonder if Clinton was aware of the phone call between her former State Department colleague Victoria Nuland and US Ambassador to Ukraine Jeffrey Pyatt in which they discuss Oleh Tyahnybok, the leader of the Svoboda party who has a history of anti-Semitic remarks (Tyahnybok is the person John McCain was criticized for meeting with in Kiev in December). Nuland describes Tyahnybok as one of the big three within the opposition leadership that the US was assisting in overthrowing the government in Ukraine. This is the same Tyahnybok who was expelled from the Ukrainian parliament in 2004 because of a speech he gave praising World War II partisans who fought Jews and "other scum." Tyahnybok also claimed that the "Jewish-Russian mafia" were running Ukraine at the time, and is the person who declared that Nazi death camp guard John Demjanjuk was a hero who was "fighting for truth." In 2005 Tyahnybok wrote open letters demanding Ukraine do more to halt "criminal activities" of "organized Jewry."

The ultra nationalist Svoboda party has a "history of anti-Semitism and [has a] platform of ethnic nationalism," according to Abraham H. Foxman, National Director of the Anti- Defamation League. Maybe Clinton was just ignorant of this fact, and the fact that "white supremacist banners and Confederate flags were draped inside Kiev's occupied City Hall, and demonstrators have hoisted Nazi SS and white power symbols over a toppled memorial to V.I. Lenin." Openly anti-Semitic parties include White Hammer and C14, the neo-Nazi youth wing of the Svoboda party, according to Haaretz. 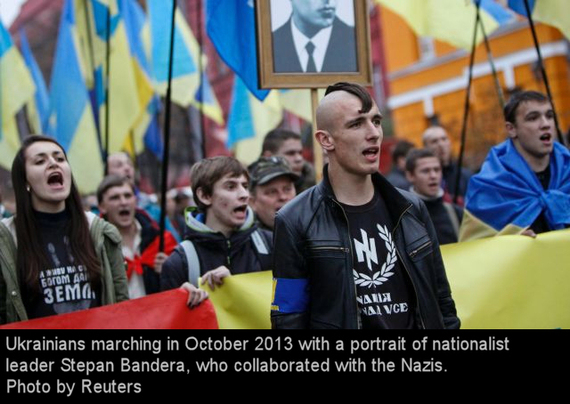 It could be that Clinton is simply uninformed, like some others, as described by Seumas Milne of the British Guardian, "You'd never know from most of the reporting that far-right nationalists and fascists have been at the heart of the protests and attacks on government buildings."

But Clinton had to have known that a 2012 European Parliament resolution condemned the Svoboda party for its racist, anti-Semitic and xenophobic views, and that the US is today supporting that same party. "The [Svoboda] party traces its roots to the Ukrainian partisan army of World War II, which was loosely allied with Nazi Germany, and its debut in Parliament [in 2012] elicited objections from Israel and groups that monitor hate speech," according to a recent New York Times article by Andrew E. Kramer. Kramer continued, "Until 2004, Svoboda had been called the Social-Nationalist Party, which critics said was just a word flip away from its true ambitions and a deliberate reference to the National Socialism of the Nazis. Unabashed neo-Nazis still populate its ranks, organizations that study hate groups in Europe say."

It's clear that people like Hillary Clinton are pushing for more US influence in Ukraine, and attempting to make Russia look bad is one tactic to achieve this goal. But by ridiculously comparing Putin to Hitler, Clinton unwittingly brought to the surface the ironic fact that it is her own country's government -- not Russia's -- that is supporting forces in Ukraine who embrace the Nazi philosophy.