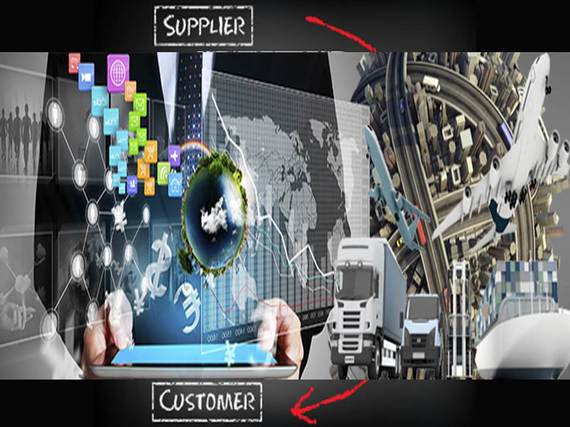 Even though a raft of more economic troubles seem to be coming from the slowdown in China, widespread commodity price collapses, resource sector credit crises, the dominoes of emerging markets beginning to fall, credit markets rolling over, interest rate shocks, the third longest bull market on record, an artificially inflated US equity market, and etc., there still is not even the slightest sign of a feasible, sustainable solution to solving the economic malaise that engulfs us. Time is now rapidly running out.

What is really wrong? Why can't we find any clear solutions to these problems? What is the real cause of the current economic breakdown? The economy has corrected itself in the past in previous business cycles. Why not this time?

The Internet vs. Synergy

Synergy is the keyword. Synergy refers to the phenomenon in which two or more discrete influences or agents act together to create an effect exponentially greater than that predicted by knowing only the separate additive effects of the individual agents.

With the advancement of IT and networking technology, multiple-to-multiple based communication has been developed in the Modern Information Age. As a result, synergy effects were developed easily, broadly, comprehensively, intentionally, logically, and in unlimited ways across the board in information.

Moreover, because this multiple-to-multiple based communication was very economical all over the world, and also possible in all directions through the development of the World Wide Web, the synergy effects of efficiency and effectiveness were created in far greater degrees than ever imagined. This multiple-to-multiple based communication with the World Wide Web was the (Digital) Internet as a meta-platform for the whole information process.

Synergy Development in the Information Market or Economy

The information market or economy, such as the economy for information itself and information-based products and/or services, has rapidly matured developing numerous synergies in the Modern Information Age. It has been made possible with the realization of exponential efficiency increases and universal application devices (digital devices) through the Digital Revolution, and also with the construction of IT infrastructure (hardware application) for the Internet Revolution and the development of numerous digital contents (software applications or digital synergies) at the base of it. Because these digital synergies were developed with the base of digital code, they have not only been freed from the restriction of time and space, but also the logical development for them has been made possible with a fair rule and standard. That is, the efforts and investment for the synergy development were not only economical, but the estimate for the results could also be much more accurately predicted. Accordingly, there have been no limits in maximizing the synergy effects. It has depended principally on imagination.

Therefore, with the rapid, economical spread of information itself and information-based products and/or services, which benefited considerably from synergy effects, all of the individual members and units on the supply side have greatly increased their productivity and product or service development capability. On the demand side, all individuals' knowledge has increased, which was directly linked to the escalation in the needs and wants of consumers.

Synergy Development in the Physical Market or Economy

However, even with the broad use of the Internet, multiple-to-multiple based transactions have not been utilized to their fullest potential in the physical (or supply chain) process, and the situation of synergy development has not changed much over the last several decades in the physical market or economy from that in the Industrial Age.

As a result, only privately owned networks have been developed in the modern physical (or supply chain) process, mostly by big companies and used only for their own benefit. No public multiple-to-multiple based transaction platform (or infrastructure) for the whole physical process has been developed at all. Not even a single one in the whole world.

Since the whole physical process comprises of only private networks of individual functions with some synergy effects, only limited effects such as additive (or arithmetical) effects could have been made in the physical market or economy.

What Has Happened in the Market or Economy?

Some structurally abnormal and unbalanced conditions have occurred in the market such as:

1. The employment condition on the supply side has been rapidly aggravated, mainly due to the adoption of advanced information and automation systems and active globalization, and this has also worsened the situation of consumer spending on the demand side.

3. Because consumer needs and wants increased faster than consuming effects, consumer spending has been curtailed.

4. The curtailment of consumer spending has brought the abrupt increase of consumer price sensitivity, and this has also caused the abrupt increase of excessive price competition in the market. This situation has developed concomitantly with the rapid expansion of efficiency-increase-oriented (cost-oriented) globalization activities such as off-shoring and outsourcing to foreign countries with lower labor costs, which has directly led to the decrease of available jobs and the reduction of income in the domestic market.

5. More seriously, a fair condition for competition between SMBs and big companies has been seriously damaged. Due to this, SMBs in almost all industries of the market have actually lost much of their business activities, and jobs at these companies have been killed on a massive scale. Very strangely, no economic experts have considered this seriously in their ruminations about the economy.

What is the Real Cause of the Current Economic Breakdown?

Put simply, it's the lack of an appropriate public multiple-to-multiple based transaction platform (or infrastructure) for the whole physical (or supply chain) process, that is, the lack of a true Inter-Supply-Chain-Net (ISCN) in the modern physical process.

The real cause for the current economic failure is to be found in the existing physical (or supply chain) process, which cannot engender sufficient synergy (or multiplying) effects as required in the Modern Information Age. With the physical market process outdated, the market will also be a laggard. Only the development of a new physical process, that is, the ISCN, will allow us to solve our numerous economic problems. If a new physical process is not developed soon, economic problems will persist. Then, as a result, national competitiveness, national prosperity, and the welfare and safety of the nation will fall into even graver danger.

Information technologies, facilities, devices, solutions, and people are already in place to develop it.

Therefore, I strongly recommend the government initiate the development of a new ISCN better suited for the Modern Information Age, and provide the active assistance and support necessary to revitalize the economy as soon as possible.