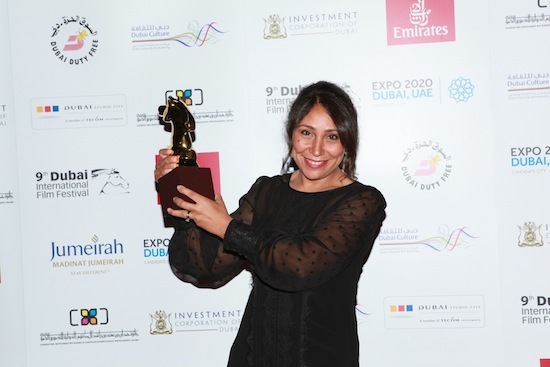 To me, Haifaa Al-Mansour's beautiful film Wadjda represents everything that is right with the world. The Arab world. I make such a statement because at this year's Dubai International Film Festival, more than 40 percent of the featured filmmakers were women (compared to 10 percent at Cannes in 2013), and because I find the stories that have been coming out of the region, the MENA region, especially in the last few years are touching, truthful and wonderfully human.

Yet in the Western world these poignant stories get caught up in politics, misconceptions and just plain ignorance. Overlooked by both the Hollywood Foreign Press Association for the Golden Globes and the Academy of Motion Pictures for a Foreign Language Oscar nomination, Wadjda holds up a mirror to all that is wrong with the cinematic elite. If we look at numbers, the Academy voting members are 94 percent white, 77 percent male, 14 percent under the age of 50, and have a median age of 62. The only thing I can see that's not completely demoralizing there is that their recently elected president is Cheryl Boone Isaacs. But really, for a medium that is watched mainly by men and women under 25, in all parts of the world, it's disheartening to see who's making their "best of the best" choices.

And don't even get me started about how groundbreaking and pioneering Al-Mansour is, being the first female filmmaker from Saudi Arabia who managed to also make the first feature film shot in the country. A nod from the Academy would have proven that the seventh art can transcend politics and forego all that other chaos-inducing stuff. Too bad the voting members were so shortsighted.

But beyond what I think of Al-Mansour, her stunning film and the way her soulful storytelling managed to take hold of my heart and never let go, it's undeniable that Wadjda has created a wave, with ripples and tides felt around the world. Following is my exclusive interview with Al-Mansour for Shawati' Abu Dhabi.

What story would you tell, if you had complete creative autonomy and open financial backing?

Haifaa Al-Mansour: I want to tell more stories in Saudi Arabia. I think it is more than just creative autonomy and financial backing; there are a lot of other factors that go into making films in this part of the world. People are very sensitive and you have to be considerate of the world they live in if you want to reach them. I want to make film as a medium seem less threatening to people here, especially for those that don't accept cinema. I think of the people I grew up with and our neighbors in the small town in Saudi that I am from. I want to tell their stories in a way that they understand, and in a way that doesn't offend them. It is difficult sometimes, but I think working within this framework is the only way to lay the foundation on which to further develop a film culture here.

What was the last movie you watched which moved you?

Al-Mansour: The Act of Killing was a very powerful and troubling film. Josh, the director, did an incredible job of showing the depths of inhumanity we are all capable of. It was very moving, and haunting, in so many ways.

Who are your top two favorite directors, and if you had to choose to only work with one, which would that be and why?

Al-Mansour: I like brother directing teams: the Dardenne brothers and the Coen brothers were both big influences on me. I would love to work with either of them. Rosetta by the Dardene brothers is such a brave film, since it really requires an audience that will invest in it, but the way they made it has so much emotional weight. I would love to learn more about their process.

Who are your favorite actor and favorite actress, and again, if you could only work with one, who would it be?

Al-Mansour: I really liked working with some of the first-time, amateur actors on my film. It was an emotional journey that we embarked on together, and we explored the themes and story together in this very fresh and exciting way. And they were very eager to prove themselves, so I felt like they worked even harder than some of the more experienced actors. I guess I would like to work with an actor who feels they haven't reached their full potential yet. Maybe someone like Lindsay Lohan, I think I could get a great performance out of her!

Who is your greatest inspiration?

Al-Mansour: Both of my parents are my inspiration. My father was a poet and philosopher who thought far beyond the borders of the tiny town he was from in the middle of the country. And my mother is a free spirit. They never listened to people who criticized their way of life, and never limited opportunities for their children. It is incredibly brave to stand up for what you believe in, and neither of them ever backed down.

What is your greatest passion?

Al-Mansour: I love developing stories, and looking for the meaning behind the adventures and episodes of every day life. I think Saudi is such a great environment for drama, since there are so many restrictions. I think the spaces that people create for themselves and the ways they work around the system are so fascinating.

If you could not be a filmmaker, what would you be?

Al-Mansour: If not a filmmaker, I would still want to be involved in story telling somehow. Writing is such a difficult but rewarding experience. I think I would always want to be writing, if not for film maybe just writing fiction or short stories.

What single personal philosophy guides you through your daily life?

Al-Mansour: Be positive, and don't be a victim. It is so easy to throw up your hands and accept your place in the system, and it can be so discouraging to go against what is expected for you and the ways people think you should act. But it is always worth standing up for what you believe in and moving forward.

The one moment in your career you are most grateful for? And the one you most regret?

Al-Mansour: I am really grateful that I found my German producers, Roman and Gerhard from Razor Film. When they came on board I knew that we were going to find a way to get the film made. They stood by my vision and helped me bring together a great team to pull off my film. I don't like to focus on regrets, since all of the difficulties we faced in developing this film ultimately made it a stronger movie, but I guess I regret spending so much time trying to convince reluctant partners to believe in the film. Still, it was a valuable learning experience, and good pitching practice!

What types of films do you think the world needs to watch more of, and less of?

Al-Mansour: I think the world, especially the Middle East, needs more hopeful stories! It is easy to be pessimistic, and to feel like a victim, but we need films that inspire us to go out and change things for the better. We have plenty of tragedy in real life in this part of the world; we don't need films to reinforce an already pervasive sense of despair.

What important lessons have you learned from your years in the film industry?

Al-Mansour: There are no sure things! Financing is an incredibly long, difficult process. It can all fall apart so easily. But hang in there, you can always rebuild and find new avenues. The extra time it took me to finance my film benefitted the project tremendously. It gave me time to develop the story and to make it better. If you constantly have to pitch your film, it gives you the chance to get feedback and further review the details.

What advice do you have for those new to the industry? And what do you hope your legacy will be?

Al-Mansour: My advice is build partnerships and don't be afraid to take advice. It is difficult to take criticism if you feel passionately about your project, but if everyone is telling you it needs to be changed, it probably needs to be changed. Don't be afraid to step out of your own perspective and try and see your work from their viewpoint. Filmmaking is a very collaborative art form, so learn to compromise.

If you could choose one film in history, which would it be, and why?

Al-Mansour: Movies are like music, and I think we will have favorite films and songs as we grow and change through the course of our lives. Film has the power to bring you back to the place and time when you first experienced it. So for me the movies of my youth, even the Hollywood blockbusters, are so special because I remember that feeling of being transported to another world and the exhilaration of seeing the outside world. In a lot of ways I feel as strongly about Snow White and all those Jackie Chan movies I watched as a kid as I do about Bicycle Thieves or Jafar Panahi. They are all incredibly important to me and instrumental in every decision I make as a director.

A bit of background on my interview with Haifaa Al-Mansour. Recently, I received my dream assignment. To write a comprehensive piece on the cinema culture and industry in the Gulf region for Shawati' Abu Dhabi. To call the magazine an elegant hub for arts, culture and lifestyle would be the understatement of the century. Looking through its pages feels like being a part of something luxurious yet down to earth, exclusive but deeply caring.

The piece was a dream come true for me because of my love for film from the region. Arab cinema has a humanity that connects deeply to its audiences, and year by year, is conquering fans all over the world. Perhaps it's because Arab films deal with women who look real, men who act real and stories that really get to the heart of the matter. As easily understood in Beirut, as in Berlin, Baltimore and Bombay.

While the entire piece, a 60-page stunning supplement in Shawati's current volume 7, issue 25 titled "In the Beginning, There Was Film," is my pride and joy, the individual interviews and voices present throughout are really what make the story. The story of a region in transition, growing daily, so much so that even a sentence written yesterday about it can seem obsolete today. And the voices of those who know it best, who create a cinematic culture by their sheer presence, are an indispensable guide to the industry's undeniable success.

The interview above, as well as the one with Saudi Hollywood producer Mohammed Al Turki, and many more to come, are all part of the cinema supplement. I wanted to share them online, since Shawati' is only available at selected newsstands and bookstores.