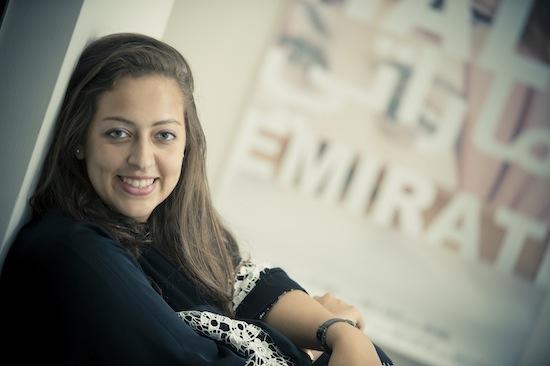 Filmmaker Amal Al-Agroobi is one of those women who never cease to amaze. Born in the UAE, she studied biomedical sciences and neuroscience in the UK before turning to filmmaking, which she admits to learning on her own through observation. She has had no formal filmmaking training, except the "occasional odd course here and there," as she puts it, yet her work is touching, beautifully shot and deeply important.

Her short film Half Emirati has screened in both the Dubai International Film Festival and the Gulf Film Festival, as well as around the world. Her latest project, the feature documentary The Brain That Sings, which won the Emirates NBD People's Choice Award in December at DIFF, follows the three-month journey of musical therapy for two autistic boys in the UAE. Al-Agroobi is already preparing to work on a TV-web series titled Proud to be a Sharjonian, showing off her hometown of Sharjah.

Catching up with the beautiful, intelligent, insightful Al-Agroobi, as I did to interview her for Shawati' Abu Dhabi, is always a pleasure and her answers cut to the heart of the matter.

How do you think being Emirati has helped in shaping your story as a filmmaker?

Amal Al-Agroobi: Being a filmmaker from any country is difficult because everyone is trying to prove themselves, get their stories out there and try and deliver the best work they can in order to advance in their career. I think the only thing about being in the UAE and being Emirati in the film industry is that it is all fairly new. This means that Emiratis should get pushed more, supported more and funded more but I still don't see that happening the way it should. That being said, we have a great backdrop to work with and some great stories that need to get out there that people don't know about. In making my first short doc Half Emirati about mixed parentage and the social affect it had on our people, a lot of people would say "oh, I never knew that". Well that's excellent because we want people to know and see things they've never seen before and the UAE can offer that because it's very much untouched.

What are the biggest challenges in being in the UAE and doing what you do?

Al-Agroobi: I think lack of funding and support is a big one. There is a lack of know-how, people don't take their work seriously because they know that options are limited so if, for instance, I have to use a particular post-production studio and there are only five in the country, those studios won't work as hard to gain your trust or deliver because they know you don't have many options -- and they're right! There aren't many options.

The industry is all about leaning to work with people, especially those you can rely on because it takes a team to make a film but this becomes a challenge when there aren't enough options or people trained in a certain field. Many a time, there have been issues that could have been prevented if only the person knew what they were doing. So there's a loss of trust -- trust in people and trust in the system... Abroad, if you're in film you're just a number and so you have to prove yourself in order to be involved with more productions. Here you're limited edition, so why prove yourself.

How did you learn to make films?

Al-Agroobi: I learnt through observation and by doing. I had no real formal film education except for the odd course here and there. I trained as a scientist and was doing my masters in neurosciences in London when I became more involved with film. I had done theater acting all my life and I was used to that but acting for film was a totally different ball game and being in London allowed me to seek out these opportunities.

If you want something bad enough, nothing is going to stop you. I would attend my morning lectures then jump on the tube and walk to a film audition or stay up all night and finish my papers just so I was free to go to a short film course the next day. Waking up at three a.m. suddenly became fun because I was where I loved to be, on set. I sacrificed a lot of holiday time and pay while I was working just so I was around to observe feature films being shot, be involved or learn. And as soon as I felt like something was not benefiting my career, I moved on.

I've been very lucky in that I've found a few hidden gems who have guided me and given me opportunities regardless of me being a scientist and an Emirati, the crew which was almost 95 percent foreign would treat me like a newbie industry professional and got me delivering bits of paper as a runner on set and rolling around in the sand with a walkie talkie in my hand. As a scientist, they could easily have said "your place isn't in this industry", as an Emirati, they could have been intimidating, bossing me around or found it awkward that a full-grown woman in an abaya was carrying heavy, dirty equipment or grappling around on the floor but they could see I really wanted to be there and do this. And I did.

What advise would you give to future filmmakers?

Al-Agroobi: Know your stuff. Don't be lazy. Failure is just not an option and not knowing is just not an option either. You can either ask or find out but don't tell me you don't know or can't make it because if this is really what you want then you need to prioritize. "I'm not coming in, is that ok?" is a question that I was often asked. I wouldn't say anything but I just knew not to invite those ones back on set again. A filmmaker who wants to be a filmmaker or anyone in fact who wants to be in the industry, has to take pride in their job and ensure they do the best job they can do. They should constantly be asking themselves "is this good enough for me? Could I put my name to it?" because if the answer is that it's not good enough for you then it certainly isn't good enough for anyone else and people like that aren't needed. A film will only work if people really want to be there, they respect you and they're giving you 110 percent.

What improvements would you like to see in the Emirati film industry?

Al-Agroobi: I would definitely like to see more support. There are a lot of talkers with big money who make it their mission to show off how much they have and what they're doing. Arrogance/Ego is the industry's number one vice. But when it really comes down to it, none of them trust Emiratis or Arabs enough to give them projects or budgets.

We see a lot of 'one-of' film courses and acting courses but not a lot of follow up. Students who attend universities that teach film in the UAE come out with no skills -- suddenly, you have them on set and they don't know what they're doing or how to do it or even basic things like what the role of a production manager is, etc. So all this film education is not really attributing to the industry per say or the future of film in the UAE.

And your thoughts on crowdfunding?

Al-Agroobi: Crowdfunding has worked really well for me in the past. I used the portal Aflamnah for my first feature documentary, The Brain That Sings and that was a success -- the project managed to raise about $15,000! I think this worked because The Brain That Sings is about autism, which makes it a community matter and therefore, a community-driven project so you can count on the support of others. When I saw that audiences were keener to support the films they wanted to see, I thought about crowdfunding for my next project, Proud to be a Sharjonian. Sharjah is close to my heart and I'm very proud of it and I was sure there were people out there who felt the same way so I pitched my project on the website and within two days I had already received 30 percent of the funds that I needed. I definitely recommend this route, especially for young up and coming filmmakers who aim to make short films, TV shows or the like. This can even work for low budget feature films which is why I feel that it might be the future of funding in the Arab region and the world for that matter, especially when you see professionals like James Franco and Spike Lee crowdfunding for their own projects. The fact of the matter is, if you want to make a film, you're going to find a way come what may and that separates those who really want to be there from those who are just doing it for the sake of making a film.

A bit of background on this interview with Amal Al-Agroobi. Recently, I received my dream assignment. To write a comprehensive piece on the cinema culture and industry in the Gulf region for Shawati' Abu Dhabi. To call the magazine an elegant hub for arts, culture and lifestyle would be the understatement of the century. Looking through its pages feels like being a part of something luxurious yet down to earth, exclusive but deeply caring.

The piece was a dream come true for me because of my love for film from the region. Arab cinema has a humanity that connects deeply to its audiences, and year by year, is conquering fans all over the world. Perhaps it's because Arab films deal with women who look real, men who act real and stories that really get to the heart of the matter. As easily understood in Beirut, as in Berlin, Baltimore and Bombay.

While the entire piece, a 60-page stunning supplement in Shawati's current volume 7, issue 25 titled "In the Beginning, There Was Film," is my pride and joy, the individual interviews and voices present throughout are really what make the story. The story of a region in transition, growing daily, so much so that even a sentence written yesterday about it can seem obsolete today. And the voices of those who know it best, who create a cinematic culture by their sheer presence, are an indispensable guide to the industry's undeniable success.

The interview above, as well as one with Saudi Hollywood producer Mohammed Al Turki, one with Wadjda filmmaker Haifaa Al-Mansour, another with Emirati filmmaker Khalid Al Mahmood and many more to come, are all part of the cinema supplement. I wanted to share them online, since Shawati' is only available at selected newsstands and bookstores.