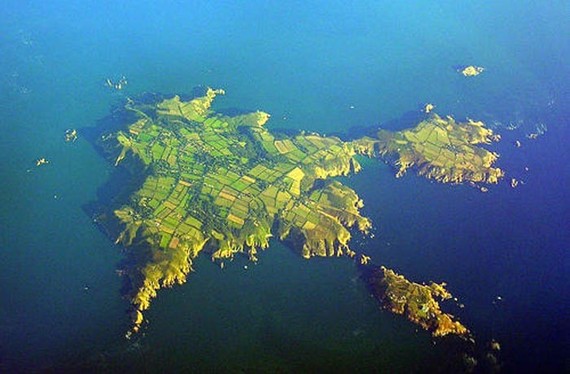 You're right off the coast of Normandy, a speck of land in the cold waters of the Channel between France and England. A mere 25 miles west of the Cherbourg Peninsula of France, and 80 miles south of the British coast. A steep-sided and car-free paradise.

The Isle of Sark is one of the few remaining places in the world where cars are banned from roads. Only tractors and horse-drawn vehicles are allowed. And yes, they do have an ambulance hooked to a tractor whenever necessary to transport somebody to the harbor, where a boat will take that person to the next island, where a helicopter will be waiting. 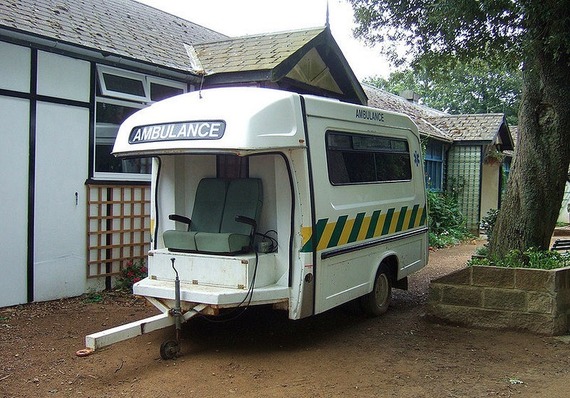 To visit, ferries will take you from the French coast or from the larger island of Guernsey, as well as from the south of England, the mother continent. In French, the island is called Sercq.

In 2011, the island was designated as a Dark Sky Community -- and the first Dark Sky Island in the world. A Dark Sky appellation means that naked-eye astronomy is possible from that spot. Usually located in desert-like or inhabited locales, the all-willing residents of Sark had to adjust their electric consumption to obtain and retain their proud status.

Sark is the ideal location for Dark Sky observation, as there are no public street lights -- and it is not needed because Sark had no paved roads and cars are banned. Being 9 miles from Guernsey and some 25 miles from mainland France, Sark is far enough away from any sources of light pollution to allow naked eye astronomy.

A time warp visit to tiny Sark reveals idyllic lifestyles, where a quaint atmosphere reminiscent of Amish or Quaker vibes makes the island unique and charming. No cars also means a good air quality, better grass and wildflowers, purer air to breathe for all, animals and humans alike. Can you imagine living without air pollution?

In 1610, Galileo Galilei described astronomical observations he had made with his homemade telescope . Among many, one of his discoveries was that the Milky Way is made up of individual stars; it resembled a streak of spilled liquid, and was so bright that it cast shadows on the ground. Today, most of us are unable to see the Milky Way in the sky above the place where we live, unless you travel to a place like Sark. 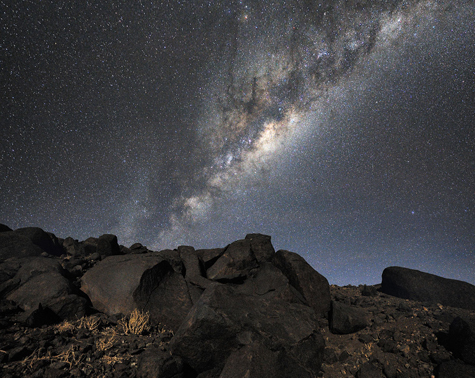 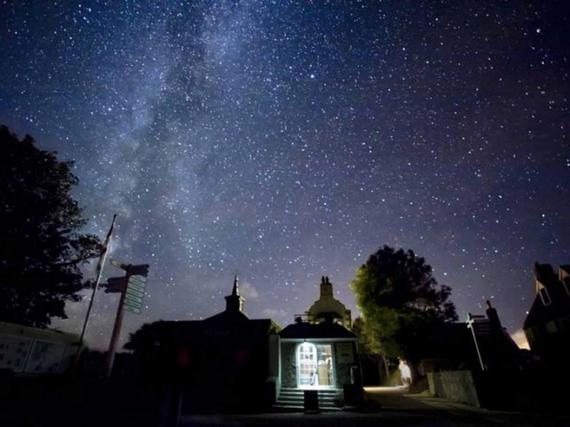 Using the Bortle Dark-Sky Scale, scientists have devised a gauging measure by which to classify the purity of skies and the naked-eye observation possibility of stars visibility. The range is from 1 to 9, with number 1 being the best possible clarity. Meteors and shooting stars are the stuff of every clear night on the island, which is a Class 3.

For example, the New York City sky is a Class 9; American suburban skies are typically Class 5, 6, or 7; the very darkest places in the continental US are never darker than Class 2 -- such as at the Grand Canyon on a moonless night.

Almost British and Yet so French.

Part of the Channel Islands, Sark is encompassed in the British Crown Dependency of Guernsey, which makes it a British property of sort. The 600 residents welcome over 40,000 visitors a year, and use the Sterling pound as currency.

With its own parliament, the royal fief has its own set of laws based on Norman law. A real hybrid community where French and English are the official languages, in addition to the local Sercquais dialect, spoken by the older inhabitants.

Sark consists of two parts, Greater Sark and Little Sark, connected by a tiny narrow isthmus called The Cut or in French La Coupée - - 300 feet long with a drop of 330 feet on each side. Until the beginning of the 20th century, the access to Little Sark was almost impossible or extremely difficult at best. 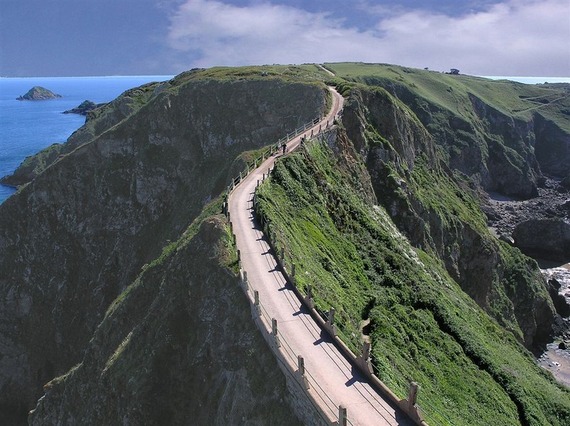 The narrow dirt track, where children used to crawl across on hands and knees to prevent being blown over the edge by the wind was then finally equipped with rails, to make it less lethal to use. There is a narrow concrete road covering the isthmus, built in 1945 by German prisoners of war under the direction of the Royal Engineers.

Many cave formations draw cave tourism to the island, as well as the beauty of its wild sand beaches, for those mastering the year long cold waters. The raw beauty of the mountainous island reminds one of Normandy and Brittany, you can see where they must have been part of each other at some point.

The flowers and shrubs, the polished rounded stones in the landscape are all very similar to the coastal towns of Western/Northern France, as well as the South coast of England. Coves and beaches, botanical wonders and rocky trails, as well as typical Neolithic constructions such as passage graves and dolmens are very similar to what you see in Normandy and Brittany,

Sark has two hotels and several guesthouses and B&Bs, keeping the tourists demands in control. The island is never very crowded and always welcoming. Tourism is a big part of the economy here. Victor Hugo lived in Sark for a while and wrote several poems on the island.

So close, yet so far away -- the quiet feeling on the island reminds of a perfect location to become castaway, but the romantic big black sky is definitely the main event here, a rare window into our infinite universe.