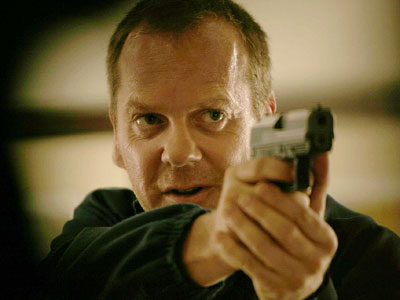 Vengeance -- experienced vicariously via movies or TV -- is one of the purest kinds of emotional satisfaction. And the revenge flick has had something of a renaissance recently, as Stanley Fish notes in this blog post, citing Liam Neeson's memorably-delivered statement from Taken as a road map for the entire genre: "If you're looking for ransom, I don't have any money. But what I do have are a very particular set of skills, skills I have acquired over a very long career, skills that make me a nightmare for people like you. If you let my daughter go now, that will be the end of it I will not look for you, I will not pursue you. But if you don't, I will look for you. I will find you. And I will kill you."

If you saw the movie, or even if you didn't, you know that's exactly what he does. And the quest to save the daughter and get the bad guy's scalp unfolds with a number of plot flourishes -- torture, Arab sheikhs collecting American virgins, corrupt French bureaucrats -- that make it appear that Dick Cheney was hired on as an uncredited script-doctor.

Revenge fantasies are durable, reliable entertainments because they allow us to experience actions that aren't allowed in real life, and that most of us wouldn't truly want to experience even if given the chance. That would be fine if we were just talking about pop culture. But during the 2000s, the revenge fantasy escaped the realm of fiction. It came to dominate our politics and -- for a while -- overturned centuries of established U.S. policy and tradition toward prisoners.

Call it the Jack Bauer Decade: a strange, hopefully anomalous phase of American history, and one that America has yet to grapple with fully.

When Cheney declared that it would be necessary to go to the "dark side" following 9/11, I doubt many people disagreed with him in the abstract. I didn't. And it remained conveniently abstract for long time, thanks to the veil of secrecy around it. We found out much later that the "dark side" meant torture, secret prisons, the suspension of due process, and a notion of judicially unassailable presidential power. I don't want to rehash the question about whether "torture works" -- whether it produces more useful intelligence or stops terrorist attacks more effectively than traditional methods. Suffice it to say that the efficacy of the dark side is at best debatable, the debate about it is almost never substantive, and its downside is considerable.

What gave the "dark side" political force has nothing to do with its function as government policy. The allure of taking the gloves off is in setting aside and repudiating government policy -- as well as broader ethical and moral constraints. Jack Bauer operates outside the rules because the rules themselves are a point of vulnerability that put us in danger. There is a kind of nihilism about government and democracy itself lurking just beneath the political discussion of these issues.

We heard versions of this again and again during the Aughts. Terrorists deserved what they got. Anything could be justified if it kept us safe. Jack Bauer became a hero to the Right, and (as detailed in books by Philippe Sands and Jane Mayer) to people actually devising detention and interrogation policy within the Bush administration. Now, 24 is an excellent TV suspense/action drama and Jack Bauer is one of the all-time great TV characters. The show's plotlines, however preposterous, capture something about our collective state of mind. But the emotional satisfactions of the four-act teleplay are not a substitute for serious thinking about complex problems. And TV suspense/action dramas -- especially those whose principal plot device is government-as-useless-hindrance -- are not good foundations for effective government action in any arena. Least of all national security.

Let your agents go all Jack Bauer and they might kill a few terrorists. But there's going to be excesses, collateral damage, disastrous mistakes. And no accountability. In the movies or TV, such inconvenient fallout is airbrushed out. Not in real life. Conservatives take note: that's how bureaucracies work.

If you watch 24 with any regularity, you'll see it's not all black-and-white, that Jack Bauer inhabits a semi-complex moral universe. Systems of justice and ethical conduct remain in place. Jack is the one guy who is capable of transgressing any legal, moral or ethical rule to save America from terrorists, mysterious plutocrats, or whomever. But he pays a terrible personal price for it. Moreover, he is willing to face the consequences -- trial, prison, torture at the hands of the Chinese, interrogation by pompous liberal senators -- for his actions. From the torture memos to the "ticking time bomb" scenario, the political debate about torture and other "dark side" practices has been about eliminating those consequences, making the dark side not the exception but the norm.

Even with a new president who says he wants to follow tradition and the rule of law, the Jack Bauer Decade won't end with the Aughts. (Who knows -- maybe we're looking at the Jack Bauer Century.) There are too many unresolved legal and political issues. And as long as terrorists are trying to blow up planes with their underpants, the American political debate will skew towards the emotional popcorn of 24, ticking time bombs and Liam Neeson's "particular set of skills."

Ben Sasse Is Resigning From The Senate: Reports