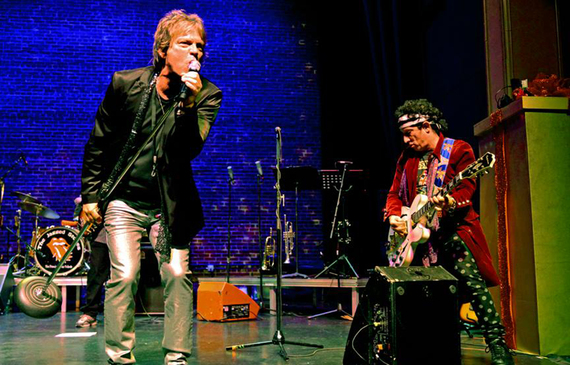 As Keith rips into the opening chords of "Honky Tonk Women," the crowd at the Tower Ballroom at The Bellagio in Las Vegas goes wild. Mick struts to the microphone and croons through pursed lips "I met a gin-soaked bar-room queen in Memphis...."

But it's not Keith Richards and Mick Jagger: It's Barry "Keef" Zion, 53, and Stephen "Mick" Skipper, 58 of the Atlanta-based Rolling Stones tribute band, The Jagged Stones. After a lifetime of being relatively unknown local musicians, these fifty-plus rockers are finally living the rock 'n' roll dream.

Both Skipper and Zion have extensive musical backgrounds but put their dream job on the back burner while pursing careers and raising their families. After a divorce and with his grown children on their own, Atlanta realtor Skipper began to frequent karaoke bars where he, of course, sang Rolling Stones tunes. Impressed by not only his vocals but his uncanny resemblance to Mick Jagger, a local guitarist encouraged Skipper to form his own band.

Skipper put an ad on Craigslist and the rest, as they say, is history. Barry Zion, a business analyst recently relocated to the Atlanta area for a post-divorce fresh start, blew Skipper away with his talent and the two hit it off immediately. "The synergy was obvious", says Zion. "Just like Mick and Keith on that train platform so many years ago."

The pair added a 12-piece "show band" complete with background vocalists, horns, and percussion distinguishing them from their competitors and providing fans with a true live Stones experience. Skipper also adds the signature saxophone parts heard on songs like "Brown Sugar" and "Can't You Hear Me Knocking".

Recognizing their targeted demographic of age 45-65 had outgrown weeknight shows, the band insisted on playing gigs that catered to the needs of their fans. "The fans in our demographic have responsible jobs and have to get up for work on Friday. They are not out on Thursday night drinking $2 beers," explains Zion. "Fans in their 50s and 60s just want to sing along, tap their feet, and be entertained by a good band. They are not looking to get wasted, let loose, and get crazy. They want to bring their kids along. That's why we provide a PG-rated show."

Their appeal is multi-generational as many Stones fans in their 20s and 30s grew up listening to the band and often attend show with their parents. "We engage both older and younger fans," says Skipper. "The Rolling Stones have been around for 50 years now and our young fans know every word to each song. They sing along with me even on deeper cuts like 'Loving Cup'."

This commitment to providing the most authentic show while recognizing the needs of their fans has paid off in a big way. Now veterans of several festivals with 20,000+ attendees and regularly sold-out shows, the band recently signed with artist management firm, Hession Entertainment, LLC. Playing the Hard Rock Cafe on Beale Street in Memphis and the Bellagio in Las Vegas are just signs of things to come for this talented group.

Among the sold-out festivals and the Las Vegas show, Skipper counts playing at the historic Strand Theater in Marietta, Georgia as a highlight of his career. "I went to the movies at The Strand as a young boy in the '60s. I never imagined I would perform there. We have performed there on New Year's Eve for the past two years. It's always a fun night with old friends, fans and family."

Zion explained that one of the difficulties of being a rocker in your 50s are the physical demands of performing. "I used to play Gibson Les Pauls and mine were 11-pound beasts. I was sore for days carrying that thing on my shoulder for three hours. But there is a tremendous rush you get when an audience is rocking to your music. It's sort of like an out-of-body experience." There are added benefits of being in a band with mature members, Zion says. "We all understand teamwork, leadership, dedication, and a sacrifice for the greater good."

"I remember Warren Haynes joined the Allman Brothers when he was my age and I wondered if I had focused on guitar playing could that have been me. Then I looked at my life and realized my career and family were worth the sacrifice. It was my choice and I would do it again the same way. How fortunate we are to have this opportunity to pursue our dreams in our 50s."

"Sure, I would have liked to have done this when I was younger but patience and experience made it work out now", adds Skipper. "For me, the thrill of getting to do what I have always wanted to do makes me feel very fortunate."

Zion offers these words of encouragement: "Don't listen to those who tell you that you're too old to dream. It's never too late! Both Skip and I are living proof of this. Do what you love because you're only on this earth for a short time."