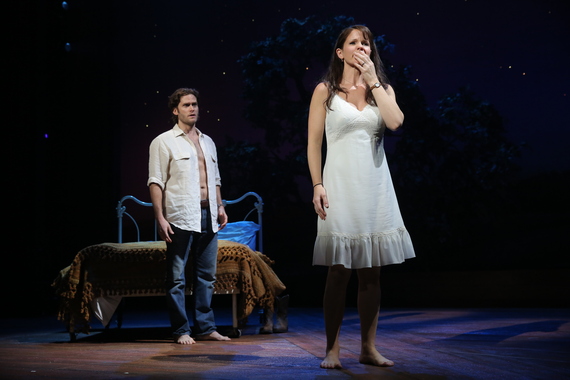 Steven Pasquale and Kelli O'Hara in The Bridges of Madison County on Broadway.

If you studied musical theater any time after 2000, chances are you memorized the original cast recording of Jason Robert Brown's The Last Five Years. You may have even been in a college production of his song cycle Songs for a New World. You for sure didn't pass muster with your fellow theater nerds unless you could perform "Shiksa Goddess" on command and got major bonus points if you knew all the words to "I Could Be In Love With Someone Like You." In much the same way that Rent defined the mid 90s, Brown's cult-favorite musicals catered perfectly to the legions of iPod toting millenials, hungry for any connection to the theater world of New York. (Fun fact: The first iPod debuted in October 2001, and The Last Five Years opened Off-Broadway in March 2002.) Back in the early aughts, knowing about Brown's music felt exclusive and saying "I'm a fan of Jason Robert Brown" was almost equivalent to saying "I want to move to New York and work in theater one day."

This is the Jason Robert Brown generation.

My own introduction to JRB came later than most, as I spent the first two years of college denying myself the possibility of a theater career and just listening to Wicked on a loop. (Back in 2004, Wicked was a largely unknown show outside of New York, if you can imagine that. I was also living in L.A.) My junior year, I met a freshman musical theater major in my dorm, and during an iTunes cast album swap one night, she gave me the gift of The Last Five Years and Songs for a New World. They were unlike anything I had ever heard before, and so insider-y that iTunes didn't auto-fill the track names. (I knew "Stars and the Moon" as Track 6 for too long to admit.) I felt like I had been given a gift, some sort of key into the world of theater I so desperately wanted to be a part of but couldn't figure out where I belonged. That summer, I added a theater degree to my diploma, and I've never looked back.

Now, myself and many of those other young dreamers are living in New York pursuing their theater career goals, and Brown is here too. Those cult favorite shows have spawned commercial hits (Parade) and flops (13) over the years, and right now, Brown seems to be having a bit of a mini-renaissance. His latest musical The Bridges of Madison County, which he penned with Marsha Norman from the novel by Robert James Waller and subsequent Clint Eastwood and Meryl Streep film, opens at the Gerald Shoenfeld Theatre on Thursday. Honeymoon in Vegas, a tuner from the 1992 film starring Nicholas Cage and Sarah Jessica Parker, is waiting in the wings for an available Broadway theater. (Screenwriter Andrew Bergman also wrote the show's book.) And the big screen adaptation of The Last Five Years, starring Anna Kendrick and Jeremy Jordan, is set to hit theaters later this year.

Brown's reach goes beyond the obsessive musical theater millenials, and while his work has certainly matured and grown over the years, his musical style remains intact. When I spoke with Brown about Bridges, he said, "I think everything feels like Jason Robert Brown songs if you know that I wrote it," and then he went on to outline the show's differences. However, one of the things that makes him so addictive as a writer are his song's mellifluous tunes and robust lyrics. Bridges' two love duets "Falling Into You" and "Before and After You/One Second & a Million Miles" are reminiscent of "The Next Ten Minutes" from Last Five Years, and "Another Life," a break-up song performed in a bar, harkens back to the cabaret style of Songs for a New World.

Now, this is not a dig to say that all of Brown's music sounds the same, but simply to say that right now, in this moment, Brown is doing what he does best, and those of us who came into our own as theater fans and professionals with Brown's music have the unique experience of seeing the growth of one of the quintessential artists of our generation. Sure it might feel a little less special now that everyone knows about him, but at least when the Bridges cast album comes out, you can bet that iTunes will auto-fill those track names.