PARIS -- France went from celebration to nightmare. The Bastille day fireworks had barely finished on Nice's Promenade des Anglais, which was heaving with people, when a white heavy-load truck plowed into the crowds. The deadly intentions were obvious -- the driver, whom we later discovered was armed, deliberately zig-zagged over 2 kilometers to create as many victims as possible of the thousands of locals and tourists who had come out to see the free concerts and fireworks in celebration of the national holiday on the waterfront avenue, the Champs Elysées of the Cote d'Azur.

Given the crowds, the final body count could have been nothing less than horrifying. At 1:30 am Friday morning, authorities had already confirmed over 70 dead and about a hundred injured. An hour and a half later, this number grew to 80 dead and over 200 injured. Just like in Paris on November 13, 2015, scenes of carnage, rumors, calls to reach loved ones and the instincts of solidarity abounded on social media.

One of the first people to comment, Christian Estrosi, the president of the Provence Alpes Cote d'Azur region and ex-mayor of Nice, immediately called for his constituents to stay at home, before lamenting "the worst tragedy in Nice's history."

Tweet: This evening at 8:30pm, an out of control truck drove full speed into the crowd gathered on the Promenade des Anglais to watch the Bastille day fireworks.

Tweet: This is the worst tragedy in Nice's history with over 70 dead so far.

A few minutes before the tragedy, following the trend of his fellow citizens, the ex-minister was celebrating the beautiful fireworks illuminating the bay of Angels.

Tweet: From the Promenade des Anglais, in front of the #Nice06 fireworks, wishing you a happy national day #14thjuly

"I have never seen this before," Eric Ciotti, the Republican Congressman for Alpes Maritimes, commented on the France Info radio station. He has been very eloquent about the attacks that have been aimed at France since January 2015.

A Hotspot Of French Tourism Targeted

Nice, the fifth largest city in France, has been a hotspot for French tourism since the beginning of the 20th century, and has never known a tragedy of such scale. Whatever the motives of the driver, shot dead by police, were (the anti-terrorism public prosecutor is leading the investigation), a target was chosen that would cause the most damage, both physically and psychologically, at a time when France was congratulating itself on having successfully hosted the UEFA Euro 2016.

The host town for the competition, Nice had installed its fan zone only a few steps away from the Prom', which was transformed on Friday into a crime scene closed off to all traffic. In the evening, the palaces of the Riviera, such as the Negresco, became improvised hospitals for the wounded and the onlookers seeking refuge. In the midst of the panic, dozens of people on holiday and locals sought refuge in the sea before being taking care of. On the advice of the local administration, the inhabitants of the city center stayed locked away at home all night, without knowing if they could go to work before the weekend.

Integral portions of the festivities hosted by the capital of the Alpes-Maritimes, such as Prom'Party, which is similar to the Bastille day celebrations, were programmed until the end of August. A Rihanna concert and a jazz festival at the Theatre de la Verdure, which should have started this Friday, have been cancelled. 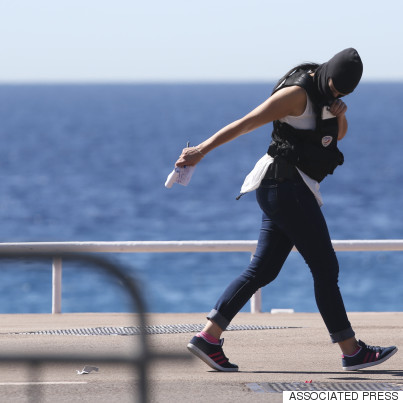 Police officials in Nice are left with many questions after Thursday's tragic attack.

The shock wave caused by this attack has caused the city to push its security precautions to its maximum, and this began well before the terrorist attacks that have plunged the country into mourning since January 2015. Nice has the toughest municipal police force and the best equipped, with over 390 armed agents and dog squads that patrol the city day and night.

The summer measures of the municipal police cater for "a reinforced police presence from 4pm to 4am." Nice also has close to 1,250 CCTV cameras and has the first center for urban supervision in France.

However, several warning signs have recently been received in the city. On February 3rd, a young man attacked three soldiers with a knife in front of a Jewish community center in the middle of the city, just few dozen meters from the Promenade des Anglais.

Nice is considered to be one of the sources of France's Islamist radicalism. Journalist Mohamed Sifaoui considers it to be one of the five cradles of terrorist recruitment in France along with Toulouse, Lyon, the north and the Paris region. It is, for instance, where Omar Omsen comes from, a jihadist believed to be dead until he re-appeared at the end of March. His group, linked to Al-Nusra Front, is alleged to have trained 50 or more people from Nice.