U.S. employers added 38,000 new workers in May, the weakest job growth in almost six years. There's no way to sugarcoat it -- that's a really low number that caught economists off guard. "Pathetic", "extremely disappointing" and "an unqualified dud" is how some of them described it.

Payrolls shrank in construction, manufacturing and mining, industries where workers tend to be well paid, according to the Labor Department's monthly jobs report. There was a sharp drop in temporary work, too, a bad sign given that temps tend to be in demand when times are good.

But average wages were up 2.5 percent from a year earlier and one bad number doesn't mean the sky is falling. We know from other data that consumers are still spending, layoffs are down and some employers are having trouble finding workers. Here are three takeaways for homebuyers and sellers.

Until this morning, markets were betting that Federal Reserve Chair Janet Yellen and her team would raise their benchmark short-term interest rate when they meet later this month. That's all changed. Overnight, Fed watchers pushed the chances of a June rate hike down to less than 4 percent.

"The May report is a disaster," said economist Douglas Holtz-Eakin, president of the American Action Forum. "It is weak enough to scare the Fed off of any rate increase, despite the fact that it would probably be smart to start moving rates toward normal."

For homebuyers, that means mortgage rates will stay low, too. When big-money investors hear bad news they tend to stick with safe bets, like Treasury bonds, which in turn keeps home loans cheap.

"Low mortgage rates are secured, which will continue to keep housing strong through the summer," Redfin chief economist Nela Richardson said. "But an economy that can't create jobs can't sustain housing no matter what the rate." Which brings us to our next point.

It's obvious but bears repeating. Wage growth and job creation have been too weak for too long. Good jobs with decent pay, in particular, are hard to find. And without those good jobs, people can't afford to buy houses -- or pay the high cost of rent. 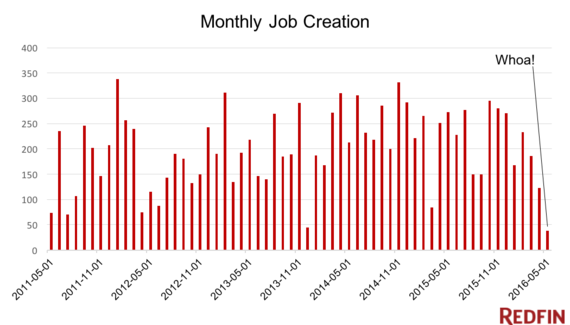 3. Too many job hunters are giving up

No. It fell because people gave up looking for jobs or dropped out of the workforce altogether.

Workforce dropouts are tracked by something called the labor-force participation rate, which has been sinking since the recession as more job seekers give up the hunt. For a while, it look liked things had turned around, but now we're not so sure. 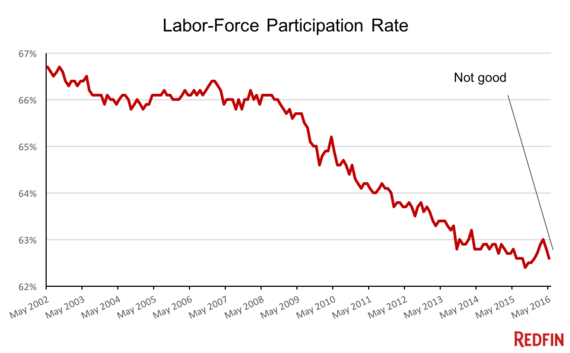 "The rebound in participation from September through March increasingly looks like a head fake," Wells Fargo chief economist John Silvia wrote in a note to clients. "Today's report casts doubt on whether growth will remain strong enough to return the labor market back to its pre-recession state."