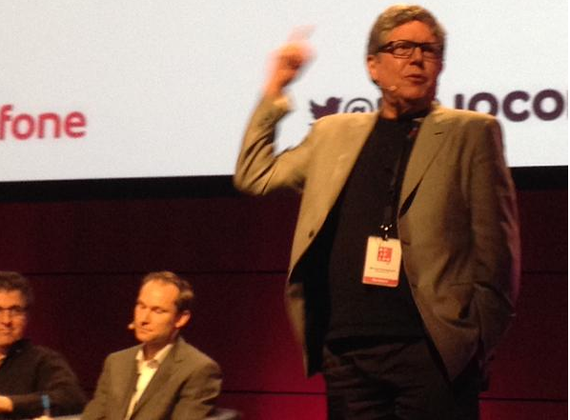 Yesterday, I was a speaker at MojoCon, a conference on Mobile Journalism, held in Dublin, Ireland.

The topic was, obviously, mobile journalism -- that is, using iPhones and such to work as a reporter.

Which is fine and valid.

And journalism is about to die by the technology.

Which is too bad, but... unavoidable.

As journalists, we can stand by and watch as job after job, career after career is obviated by the exponentially growing power of tech.

This process starts small: Elevator operators (or lift drivers, as we say in the UK) are replaced by do-it-yourself push buttons. Factory workers are replaced by robots. Bank tellers are replaced by ATM machines. (We all like ATM machines. Who wants to stand on line to cash a check (or cheque)? Amazonwipes out store clerks and small shops. Every time we make an online purchase of music, we wipe out another record store (records??). The list rolls on and on. It is the inevitable consequence of technology and the tyranny of Moore's Law - the tech just keeps getting faster, better and cheaper.

Soon lawyers will be replaced by software that gins up all that boilerplate, - much faster and far less expensively. The FT today reports that both Google and Johnson & Johnson are gearing up for 'cutting edge healthcare with robotic surgeons'.

There are 3 billion people around the world with iPhones or smart phones in their pockets.

Those phones are not just phones (clearly), but, among other things, remarkably powerful platforms for journalism. You can write on them, shoot photos, record and edit video and even live stream - and upload it all up to the Internet and a waiting world of a few billion viewers, and all for free.

At MojoCon, 600 or so reporters are learning how to use smart phones and their remarkable power to report on events around the world simply, easily and efficiently. But if those journalists can use those tools, so can anyone else. And so WILL everyone else. There is no barrier to being a journalist. Anyone can do it. And they do. This is the content that fills Twitter, Facebook, Instagram, Meerkat and so on. All news and information -- all filled by a billion people reporting all the time for free.

So the job of the professional journalist is as dead as the elevator operator.

That's technology for you.

We all like the idea of the driverless car. Except it is the end of the careers of truck drivers, taxi drivers, bus drivers and so on.

So too with the smart phone.

Today, the world's biggest taxi company, UBER, (with a valuation of $30B), does not own a single taxi.

The world's biggest hotelier, Airbnb does not own a single hotel room.

In the not too distant future, the world's biggest and most powerful news and media company will not employ a single journalist.

The model is already here.

All that is needed is someone who can put this all together.

How hard could that be?