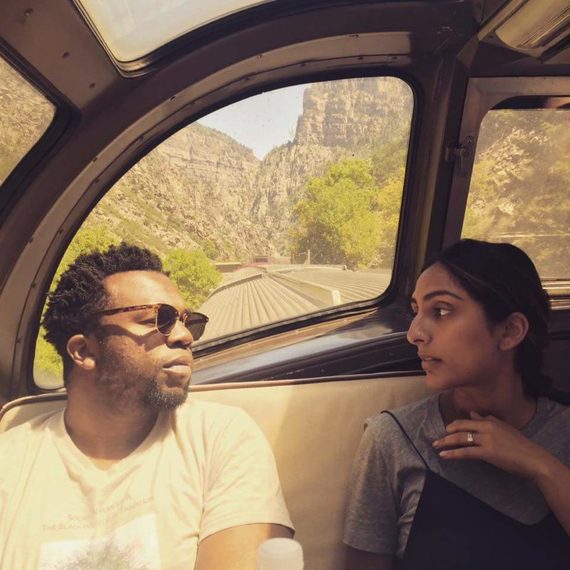 Seated in a 1930s Pullman train car, Phillip Ellison carved a broad arc across the country: Los Angeles, San Francisco, Denver, Milwaukee, Detroit. Ellison had no final endpoint toward which his locomotive was rushing: he was simply riding the rails, as part of the Millennial Trains Project (MTP), a nonprofit venture with Comcast NBCUniversal, a lead partner of the journey. Along with 25 other young adults, he was making a nine-day, transcontinental trek this August to open himself to new ideas for ULink, his new startup that's in the works. "[MTP is promoting] American innovation, entrepreneurship and trans-regional understanding of the United States, by allowing people doing social impact to come together," Ellison says.

In the early stages of developing a tech platform to assist community college students, Ellison wanted to spend the 3,100-mile journey homing in on his product's capabilities and its growth potential, while discovering what other young people were doing in their hometowns. As the American West rushed by his window, he engaged the other social entrepreneurs and rising nonprofit leaders in conversation: Where were they all headed, and how could they help each other get there?

Onboard MTP, Ellison hammered out ideas for ULink, a website that will help community college students engage with on-campus resources (such as advising sessions to map out the credits that four-year colleges require or counseling to help deal with tough emotional situations) and successfully transfer to a four-year university. Ellison, a one-time dropout wrapping up his bachelor's degree at Tufts University in Massachusetts, wanted to hear what had helped his peers navigate their undergraduate experience and whether community college counselors and transfer advisors, faculty members, students and IT programmers in each of MTP's five stops would be open to using the platform. Aided by their insights, he's planning to launch a beta pilot of the website within the next year at a community college in the Boston area.

"Community college is often a head-down experience. Students do not know what's happening on campus, and they're not accessing resources until it's too late," Ellison explains to NationSwell. On the administrative side, counseling "processes are not quite modernized, digital or up to date. You see the limitations of a human being in terms of resources." ULink is still in beta development, but once launched, it will help counselors manage their students, see who's coming in and who's been out of touch and send text message check-ins through a mobile app -- allowing them to reach more students all at once.

Ellison knows about the necessity of college advising more acutely than most. He was forced to leave Penn State University prematurely due to a lack of financial aid. "That was one of the darkest times in my life, to be frank," he says. Like many students arriving at four-year institutions, he says he didn't fully comprehend higher education's blockbuster price tag, even at a public school. Looking back, he wishes he had known more about the financial aspects of college. (For instance, public schools charge more to out-of-state residents, and with rare exception, student loans stick with most people even after a declaration of bankruptcy.) Constantly worrying about his bank accounts, Ellison's grades fell precipitously. He dropped out and returned home to East Harlem.

That's not to say Ellison was giving up. "I decided to go home and spend some time thinking about what I was going to do, to right the ship basically," he explains. Almost immediately, he went to work as a manual laborer. Alongside middle-aged underrepresented workers, the teenager manned demolition projects in Brooklyn and moved corporate furniture in Manhattan. No boss seemed to value worker contributions at those temp jobs, he noticed. They didn't provide healthcare benefits, and they offered no job security -- a daily reality for millions of Americans who never obtained a college degree, he saw.

Eventually, Ellison was accepted to serve as an AmeriCorps member with City Year, assisting a green energy startup. (There, he met one of ULink's current co-founders, Parisa Esmaili.) He leveraged that into a job at Citizen Schools, a nonprofit that provides extra hours of instruction at public middle schools. He also worked on campaigns for Obama's reelection and a failed primary bid by Reshma Saujani (the founder of Girls Who Code) to be New York City's public advocate. In retrospect, he says the series of jobs taught him leadership: by watching how a founder made tough decisions, by practicing at the front of a classroom and by trying to elect principled leaders.

In his off-hours, Ellison started attending classes at Eugenio María de Hostos Community College, one of the City University of New York schools near the Bronx's Grand Concourse. Once again, working families surrounded him. He saw many of his classmates pulled away from their education by the need to get a job to pay for their kids. Others, closer to him in age, didn't seem to know how to navigate the school's bureaucracy. On his second attempt at higher education, Ellison realized that community college students don't know what four-year universities are looking for in applicants and understaffed counseling departments couldn't provide all the help needed. "I saw folks stopping sometimes, because they didn't know what their end goal could be or how to get to that point," he says. "The mentors were not checking in on them. It's not a seamless transition."

After a long hiatus from a four-year college, Ellison returned to school at Tufts last year. At times, he feels out of place, coming from the South Bronx to a bucolic research institution with a billion-dollar endowment that predates the Civil War. There, he lived with Jubril Lawal (a former classmate at Hostos and current co-founder of ULink), and together they translated their own experience negotiating educational barriers into ULink's platform. "By merging tech and human interactions in a strategic way," says Ellison, who regularly folds business school lingo into ULink's sales pitch, "our premise is that closing some of the advising and engagement gaps will promote completion and persistence and improve the overall student experience." Where Ellison once felt disconnected, he hopes the app will provide clarity and direction, those touch points that tie a person to a larger institution.

Through conversations with other train ride participants and with people at various city stops, Ellison deepened his understanding of the community college system. He asked why certain schools have off-the-charts transfer rates, while others are dropout factories. How can his platform make a student feel at home on a two-year commuter campus, in the same way that a student living in the dorms at a four-year institution participates in the school's history and traditions? Will a few text messages be enough?

His cross-country sojourn confirmed that he's asking the right questions. At a City College of San Francisco, he showed the school's chief technology officer his beta product, and the administrator shared insights about the inadequacies of older education planning software and his decision-making calculus for new technology. Ellison speculated ULink may have just gained "a key adviser." Back on the train, he discussed his ideas with his mentors and other social entrepreneurs. Fauzia Musa, from the design firm IDEO, reminded him that if students found some real value in the product and used it to solve their challenges, then colleges would quickly fall into line. Those "new understandings and unique opportunities for growth" proved vital to understanding what ULink could be.

Now it's a matter of Ellison putting his answers into practice. The steaming train may have pulled into the final station, but his real journey is just beginning.

This article is part of the What's Possible series produced by NationSwell and Comcast NBCUniversal, which shines a light on changemakers who are creating opportunities to help people and communities thrive in a 21st century world. These social entrepreneurs and their future forward ideas represent what's possible when people come together to create solutions that connect, educate and empower others and move America forward.