Two books of photographs reflect a new vision of gay life, one looking forward, the other back. Both boggle the mind with what they reveal about the changing comédie humaine of gender and same-sex love. 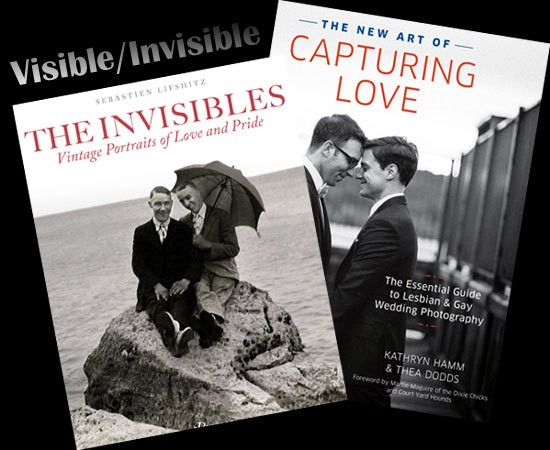 The Invisibles: Vintage Portraits of Love and Pride, by French filmmaker Sébastien Lifshitz (Rizzoli, May 2014) was announced in the Huffington Post with a brief interview of the author by James Nichols. The book shows a homosexual world that couldn't be seen before Stonewall.

I am not talking about transvestite performance shots, like Man Ray's series of a Paris cabaret performer named Barbette, or those lecherous lesbian postcards and other soft-porn images that kiosks used to sell from under the counter, or street vendors from the inside of their coats -- contraband of the verboten, the louche underground of "the love that dare not speak its name." 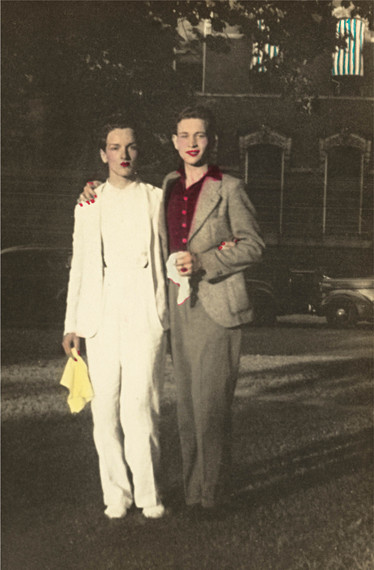 Lifshitz discovered that this love spoke volumes. Men and women in the first half of the 20th century, in the middle of severe oppression, took pictures of themselves and each other that tell a radically different story. In lovingly preserved photo albums this story wound its way to the French flee markets and garage sales of today, waiting in secret to be seen.

Surprise discovery
Lifshitz one day came across a Kodachrome family album from the sixties that had belonged to two seasoned ladies. The well-bred women were posing together in ways that caught his eye and puzzled him. They clearly were a lesbian couple, but how could they dare to have their intimate images processed at a lab - and thus quite in the public eye -- at a time when discretion was paramount? Looking for further evidence of this desire to leave a record Lifshitz found that the two daring ladies were not alone. The vintage photo boxes and albums he began collecting rendered a rich harvest of "Invisibles," more than enough to fill a book with six decades of evidence. 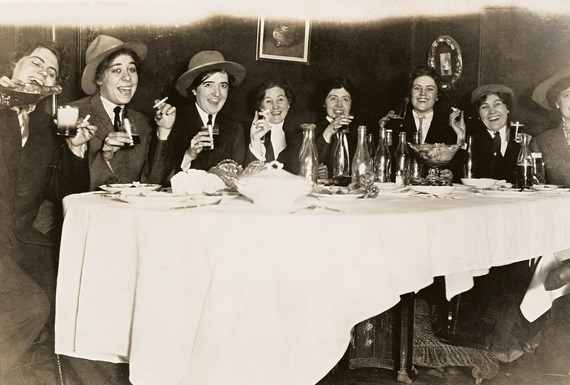 What surprises at first glance in this collection is the continuity, from 1900 to the sixties, of a spirit of joy and subversive celebration. There is a prevailing delight in playing with gender, alone, coupled, or in a group of friends, mocking social codes and misbehaving. The complicity between the partners of this playful as well as serious pursuit is extraordinarily life-affirming and sexy. Sometimes elaborate costumes and transvestite disguises are used, at times for a grand, even staged, theatrical effect or for a simple cross-dressing party at home. Just as often the merest touch, a slightly feminine or masculine pose, a trace of lipstick or a high-heel shoe are the possible give-away that makes you look twice, and then look again. Like in a Rohrschach puzzle, you begin to wonder: men masquerading as women? Women playing men? Who is who in these photographs? And what is really going on? 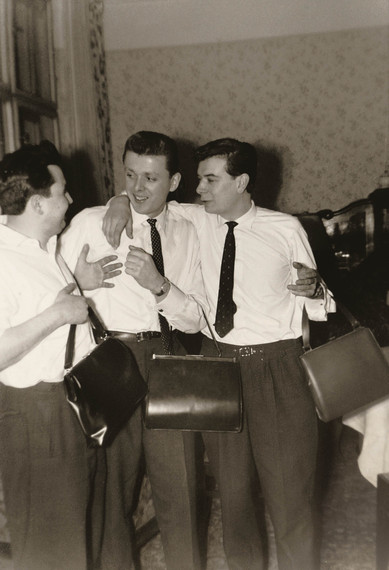 Mysteries
One photograph, for example, shows three good-looking young men in white dress shirts and black ties engaged in a lively conversation, seemingly having fun at a frat party, but at second glance it turns out that each man holds a ladies' handbag by the elbow. Who are they? What's the story with these handbags? While women dressed as dandys camp it up with fedoras, mustaches and cigars, other women enact a wedding ceremony with such sacred earnestness that there is no doubt they mean "until death do you part."

In another photo, a chubby middle-aged man with a girl's barrette in his short hair and a dainty bracelet on his arm, looks with serious eyes at the camera while he breast-feeds a doll. A couple of seasoned, rugged-faced men present themselves (in a snapshot that may have been a "selfie") with worker women's scarves on their heads.

Who would have thought that gays and lesbians from repressive eras left such a trace of pleasure and playfulness (at least in France), facing the camera with such obvious pride?

Capturing love
Interestingly, this collection of historical photographs -- gay pride before the hour - has a modern equivalent in the book, The New Art of Capturing Love, a book of photographs of gay and lesbian couples on the way to tying the knot. The subtitle: "The Essential Guide to Lesbian and Gay Wedding Photography " jumps half a century forward into the glorious Now of gay wedding rights. 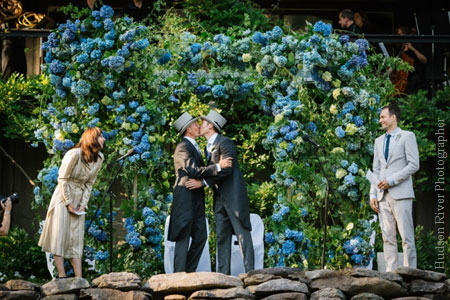 What a leap and what a change! Here, gay love and commitment "for better or worse" are celebrated in public, involving family, friends and whole tribes of equally proud supporters. In the ten years of struggles to break the gridlock for gay marriage in state after state (20 states have legalized it and all the others are faced with legal challenges) a new industry has evolved - the gay wedding industry. So many gays and lesbians are stepping to the altar, with so many more to come, that guidance is in demand. How do you document your great day? How do you create poignant, romantic, funny, authentic wedding photographs - from the engagement to the preparations, the ceremony and celebration to the final toss of the bouquet? Author Kathryn Hamm is the founder of the first gay online wedding boutique (gayweddings.com) and Thea Dodds is a seasoned photographer who invited a number of other great photographers to join in for this book. 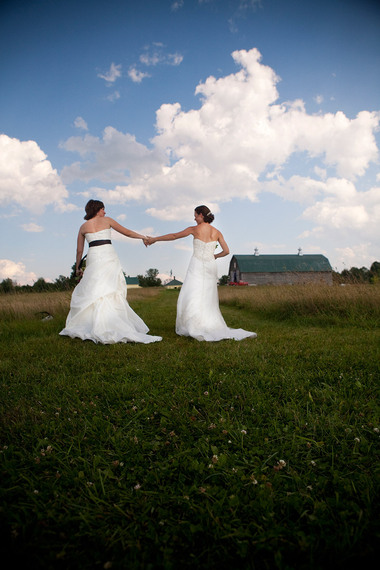 Aren't wedding celebrations always the same, following the same old, basic tradition? The authors make a convincing case for the sometimes subtle and sometimes dramatic differences that must be taken into consideration. LGTBQ couples see themselves, present or pose themselves, differently. They may have no family present for their wedding, may prepare together, and may have married the same person already multiple times as wedding rights kept evolving. They may have been together for decades, may not be comfortable with public display of affection, and may not be legally marrying at all. How does the gay wedding photograph reflect the changes? No more big groom in black hovering over little woman in white. Gone is the "bridal bias": the focus is always equally on both spouses.

The big surprise for me as a reader was that today's same-sex couples present themselves very much as the couples in The Invisibles did so many decades earlier. The wedding scenes are now mostly in rich color, perfectly staged and captured, but the spirit is delightfully similar. There is romance, erotic intensity, playfulness and pride. Some of the same props appear, like the jaunty umbrella; there is of course fashionable elegance but also the theatrical use of costumes. There are arresting stagings like rooftops or a fire escape. Like the "Invisibles," the contemporary brothers and sisters in Capturing Love opt for humorous snapshots: a bridesmaid in flip-flops is surrounded by her male fashion police, pointing with comic outrage at her feet; male nymphs cavort in a romantic outdoors celebration; double bouquets are tossed in the air; two ecstatic newly-wed lesbians flip out on a New York escalator. 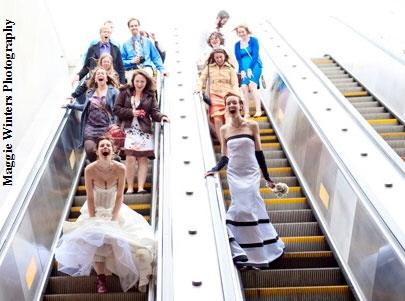 Men kissing
As if the new book had taken the historic photographs as a role model, the gay men of today adopt eye-to-eye and skin contact. Instead of standing shoulder to shoulder, as men tend to do, looking out into the middle distance while they converse, these men are openly affectionate. Sexy, tender shots of men kissing fill the pages in both books, with the modern tenor being delicacy, respectfulness and good taste. The women, of course, have no problem being hands-on and emotional; they in turn are encouraged to break role stereotypes in their stance even if their look is butch-femme.

Capturing Love is beautifully written and the quality of the photographs is superb, with a natural and spontaneous look, although most pictures are carefully and cleverly posed. What is obviously missing from this new statement of gay marriage pride and respectability is outright provocation, two women cross-dressing as grooms or two men dressed as brides. It may take another half century for some author to collect and publish gay pictures of our time that mock all wedding traditions and demonstrate a subversive spirit that may already exist in private, invisible for now.